The “for him” qualifier is unnecessary. 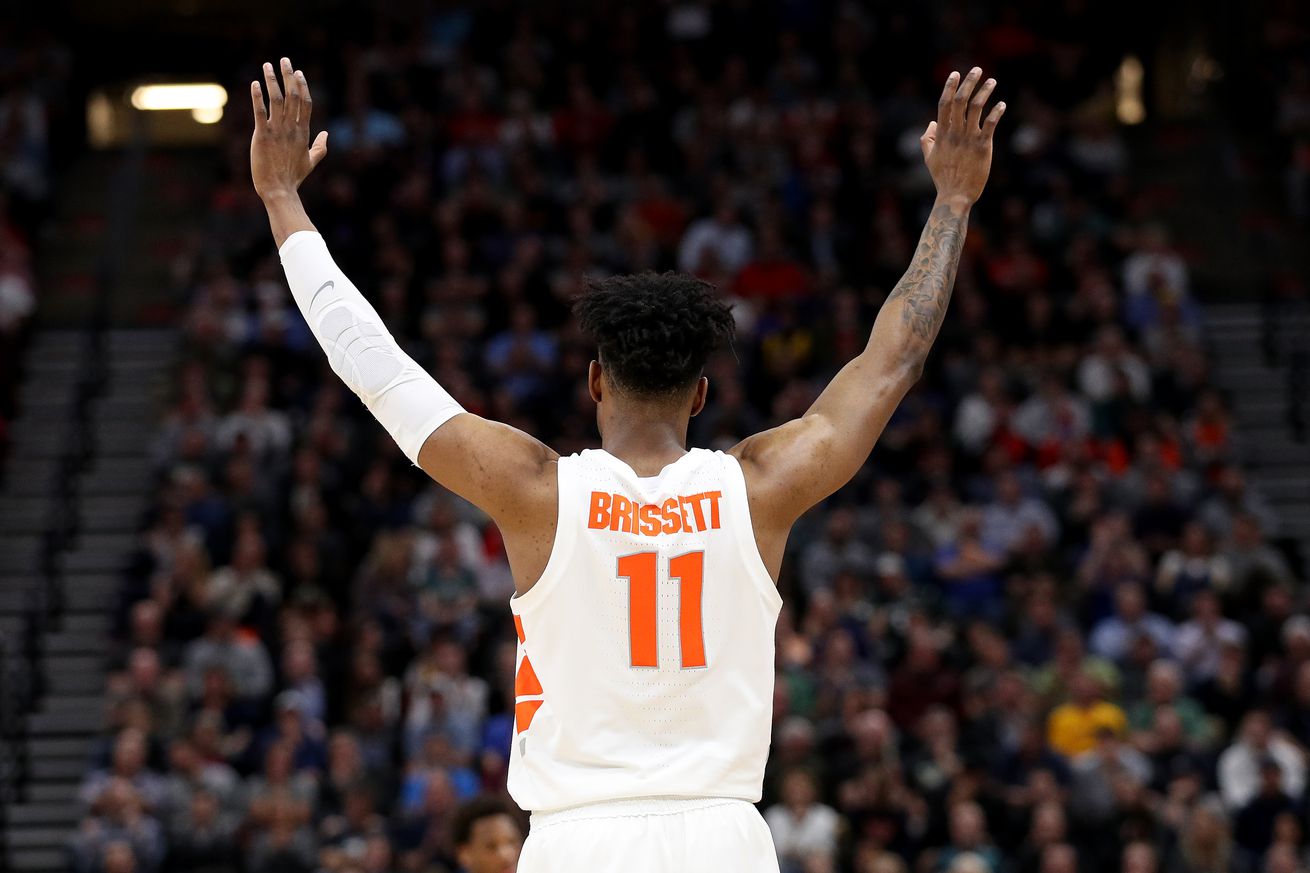 Over the last few years, Syracuse Orange fan reactions to football and basketball players declaring for the draft has shifted along with much of the national conversation on the matter. Whether you believe players should be paid or not, it seems most (even athletic directors) can agree that additional compensation areas should be explored.

That idea reflects a greater emphasis on labor practices nationwide, but also helps inform the opinion that if players want to declare for the draft, they’re well within their rights to make the best decision... for them.

It means well, of course. I’ve seen far fewer negative reactions to Oshae Brissett’s decision to keep his name in the NBA Draft pool than we’ve seen directed at SU players most previous years (though there were still some), and that’s a great step in the right direction. However, the “best decision for them” line — one I’ve used myself numerous times — also reveals the other side of the coin. The best decision “for them” vs. the best decision for Syracuse (or any other school), via your fandom.

The reality is that the best decision “for them” is the best decision. Wherever you fall on the player compensation issue, perhaps view this instead in the context of paid professionals in any field. Maybe your own career, even.

If you choose to change jobs, you’re making the best decision. The motivating factors can be different — personal, professional, strictly financial, geography-based — but the decision is still the best one because you’re the one it ultimately affects. Your job, like Syracuse sports, benefits from having you around and gets more value out of your presence than you’re truly worth. There’s a lengthy diatribe on wage stagnation in there too, but I’ll leave that out of this specific conversation.

When you make that career change, your job needs to adjust. But that’s not your fault, and no one should make you feel like it is, either. I’ve had this happen to me, and it’s patently ridiculous. Chances are you’re underpaid relative to the work you do and the hours you spend. You can’t take your employer to task for that, but they can take you to task for leaving? Why does that dynamic make any sense.

Looping back to Syracuse, what Oshae Brissett’s departure does to Syracuse’s roster for 2019-20 has no bearing on whether it was the right decision — for him or anyone else. It’s not Syracuse or its fans’ job to dictate that. For the program, you’re dealing with between one and five years of free labor from players. It’s their (Jim Boeheim and the coaching staff) job to be prepared for departures and adjust accordingly. For fans, it’s your job to cheer on your team. That’s pretty much it. Brissett or any other Syracuse player that decides to leave early (or after playing four years) doesn’t owe you anything for it. Yet they’ll still likely express plenty of gratitude just the same.

Because the best decision for them is also the best decision for Syracuse. Consistently churning out future pro players is a valuable selling point for any college program. For the Orange, fighting nonsensical perceptions about the 2-3 zone, it’s an essential piece of the puzzle. If players don’t find success at the next level, that’s also no reflection on Boeheim or the program. As discussed numerous times before, “making it” as a professional athlete is just as much about luck (with regard to how well a player fits) as it is about talent.

Think about all of the early departures in the last decade, and the advantage to Syracuse and player alike is obvious each and every time. The 2009-10 team was as good as it was in part because of the early departures of guys like Jonny Flynn, Paul Harris and Eric Devendorf. In 2011, Wes Johnson’s departure gave way to a Kris Joseph’s growth and valuable (for the future) minutes for C.J. Fair and Dion Waiters. Fab Melo leaving in 2012 cleared the way for Rakeem Christmas, Baye Keita and Dajuan Coleman to get more minutes. The absence of Michael Carter-Williams in 2013-14 let Tyler Ennis have his own impressive year. Ennis’s absence then cleared the way for bigger contributions from Trevor Cooney and Michael Gbinije the following season...

I could go on. But when coupling those results with the fact that those Orange players all went on to earn money playing professional basketball somewhere — which was the point of them playing basketball at Syracuse in the first place — it’s easy to see how going is always the best decision. For everyone.

So while next year’s team looks like a weird combination of youth and moderate experience that may be forced to jack up 40-50 threes per game, chances are we’re going to get something out of that, no matter the result of the season. It may not be apparent right away, of course. But experience is a valuable thing at the college level, and getting thrown into the spotlight early can pay extra dividends down the road. I, for one, look forward to rooting on next year’s probable Empire State Warriors AND Oshae Brissett and Tyus Battle, along with the all of the other Syracuse players at the pro level.