The Final Four is here.  Let's see who will advance to the championship game.

Iowa took early control in the first half and then cruised to a 67-55 victory over Arizona to advance to the National Championship game.  Luka Garza was one of three Hawkeyes to score in double-figures, finishing with 12 pts and 8 rebs.  Bakari Evelyn and Jordan Bohannon also added 12 points a piece.  Arizona really struggled to take care of the ball throughout, coughing up 17 turnovers which turned into 25 Iowa points.

It was the three point shot that proved critical for Oregon in their 73-70 win over Baylor.  Oregon made 8 of 17 three point attempts, but 6 of 8 in the first half as the Ducks led by as many as 13 points.  Oregon went into half with a 35-28 lead.  Baylor fought back behind the spectacular play of Jared Butler.  Butler, who finished with 26 points in the loss, made a 3 with 12 minutes remaining to give Baylor their first lead of the game at 47-46.  Baylor maintained control, taking a 55-52 lead into the under 8 media timeout.

For Oregon, a trio of Chris Duarte, Payton Prichard, and Will Richardson had the answer down the stretch.  With the game tied at 68 with just over a minute remaining, Payton Prichard made a 3 to give Oregon the lead.  A Jared Butler missed 3 point attempt on the other end led to a fastbreak where Pritchard found Chandler Lawson for a layup to give Oregon a 5 point lead and ice the game. 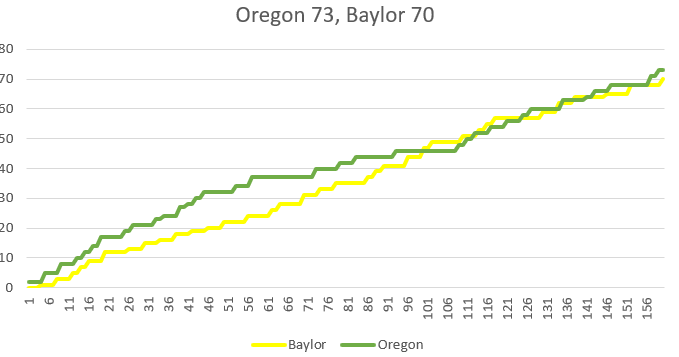