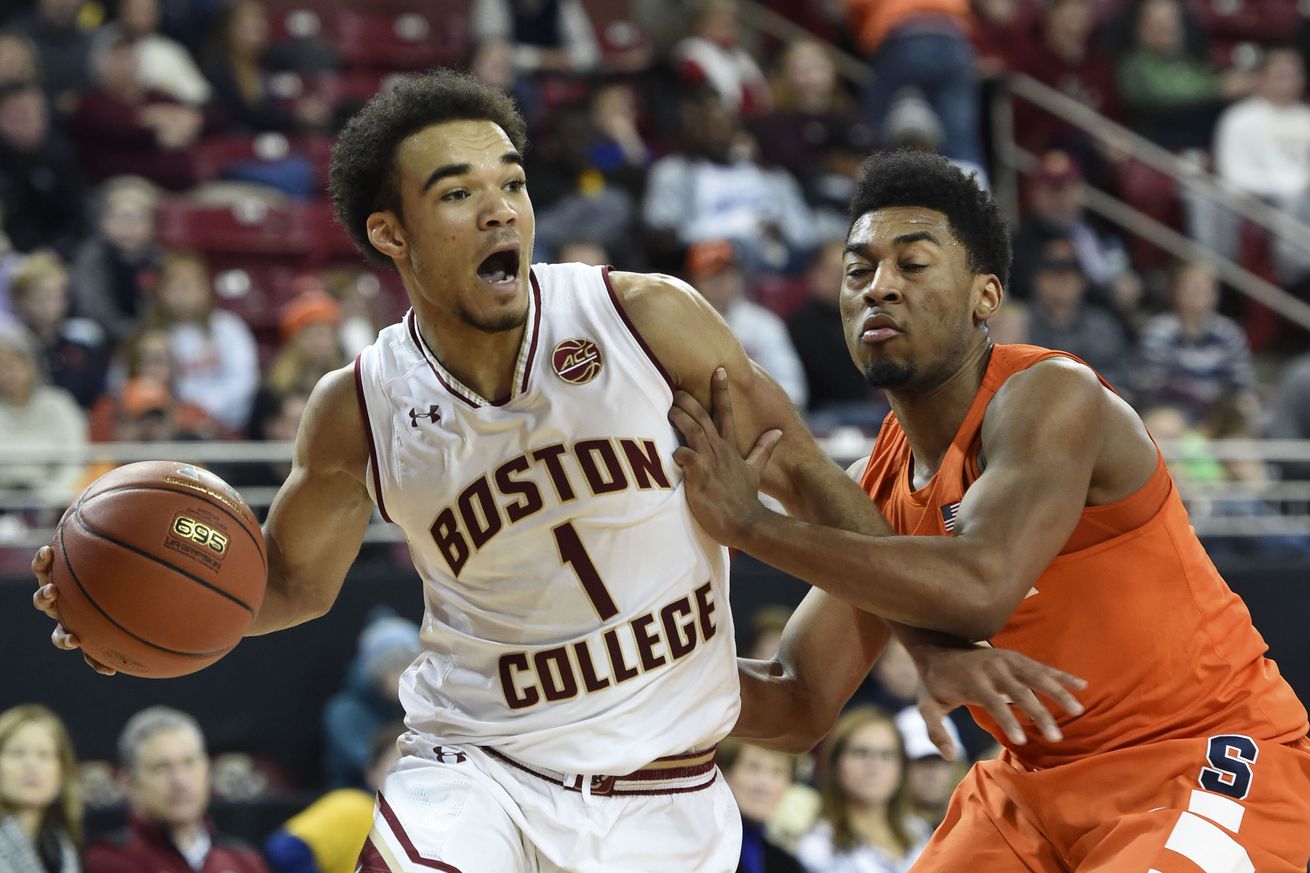 Wake Forest will attempt to win their first conference game of the year as they welcome Boston College to the Joel tonight for a 7 PM tip in the latest edition of #therivalry.

While I am not nearly as far out on the ledge as a lot of my fellow Wake Forest fans, tonight is a crucial game for the Demon Deacons to win if they want to so much as sniff the NCAA Tournament this season. The Deacs are favored by 15 points according to Ken Pomeroy, with a 91% chance to win the game.

Nonetheless, they have rattled off four wins in their last five games, including three top 100 wins in KenPom over Auburn (neutral), Providence (home), and Syracuse (home).

Sophomore Jerome Robinson leads the Eagles in usage at 29%, while shooting 32% of the shots while on the floor. He is joined by freshman Ky Bowman, who has caught fire as of late, dropping 106 points in his last five games (21.2 PPG), including 30 against Syracuse and 33 against Fairfield.

Guarding these two players will be of utmost importance for the Deacs if they want to win this game. At 6-1, Bowman will likely be guarded by a combination of Bryant Crawford and Mitchell Wilbekin, while the 6-5 Robinson will probably draw Keyshawn Woods as the primary defender.

It will be interesting to see what head coach Danny Manning does defensively tonight, as Boston College is shooting 41% from three’s on the year (8th best in the country). Robinson (41%), and Bowman (46%), are joined by Jordan Chatman (42%), and AJ Turner (46%) as players shooting over 40% from 3Pt on the season.

Despite starting hot from the 3Pt line, the Eagles are ranked 219th in the nation in offensive efficiency, primarily because they turn the ball over on 22% of their possessions (302nd in the nation). While their effective field goal percentage is 76th in the country, they also do not crash the boards well (211th), and are average at getting to the line (162nd).

It’s pretty strange that a team shoots 41% from 3Pt, but only 63% (320th nationally) from the free throw line, but that’s exactly what Boston College has managed to do this season. It’s especially strange because Robinson and Bowman are 64% and 68% respectively while taking 43% of all the team’s free throws. That means its not just a matter of free throws being shot by the wrong guys, but their sharpshooters from downtown aren’t good free throw shooters so far this season.

The main Achilles Heel for the Eagles comes in their interior play, which could spell trouble if John Collins has anything to say about it. Graduate transfers Connar Tava (Western Michigan), and Mo Jeffers (Delaware) start at the power forward and center positions at 6-6, and 6-9 respectively. Collins at 6-10 and Dinos Mitoglou at 6-10 have an obvious size advantage there, and I expect Manning to exploit that early and often.

BC has been very good at defending the three-ball as well, limiting opponents to 29% so far on the season. They are also pretty good at grabbing defensive rebounds, which they will have to do to stop Collins from getting second chances.

Overall Wake Forest is a better team than Boston College and I expect that to show tonight. Surely the team is embarrassed about their play down the stretch the past two games and is on a mission to correct that and not allow the other team to even have a chance to win it at the end.

I protect an all-around great game from the Deacs to get back on the right track. The last two games were extremely frustrating from a results standpoint and the way that the game was lost, but the season goals are still in front of the team. Get a win tonight to get on the right track headed into the next two games (@UVA, UNC in Winston).

This article was originally published at http://www.BloggerSoDear.com (an SB Nation blog). If you are interested in sharing your website's content with SCACCHoops.com, Contact Us.
Categories: Boston College, Clemson, Georgia Tech, Syracuse, UNC, Wake Forest