Syracuse vs. BC preview: Five things to watch for - SCACCHoops.com

Syracuse vs. BC preview: Five things to watch for

Hopefully, we’re not watching a repeat of last year’s calamity 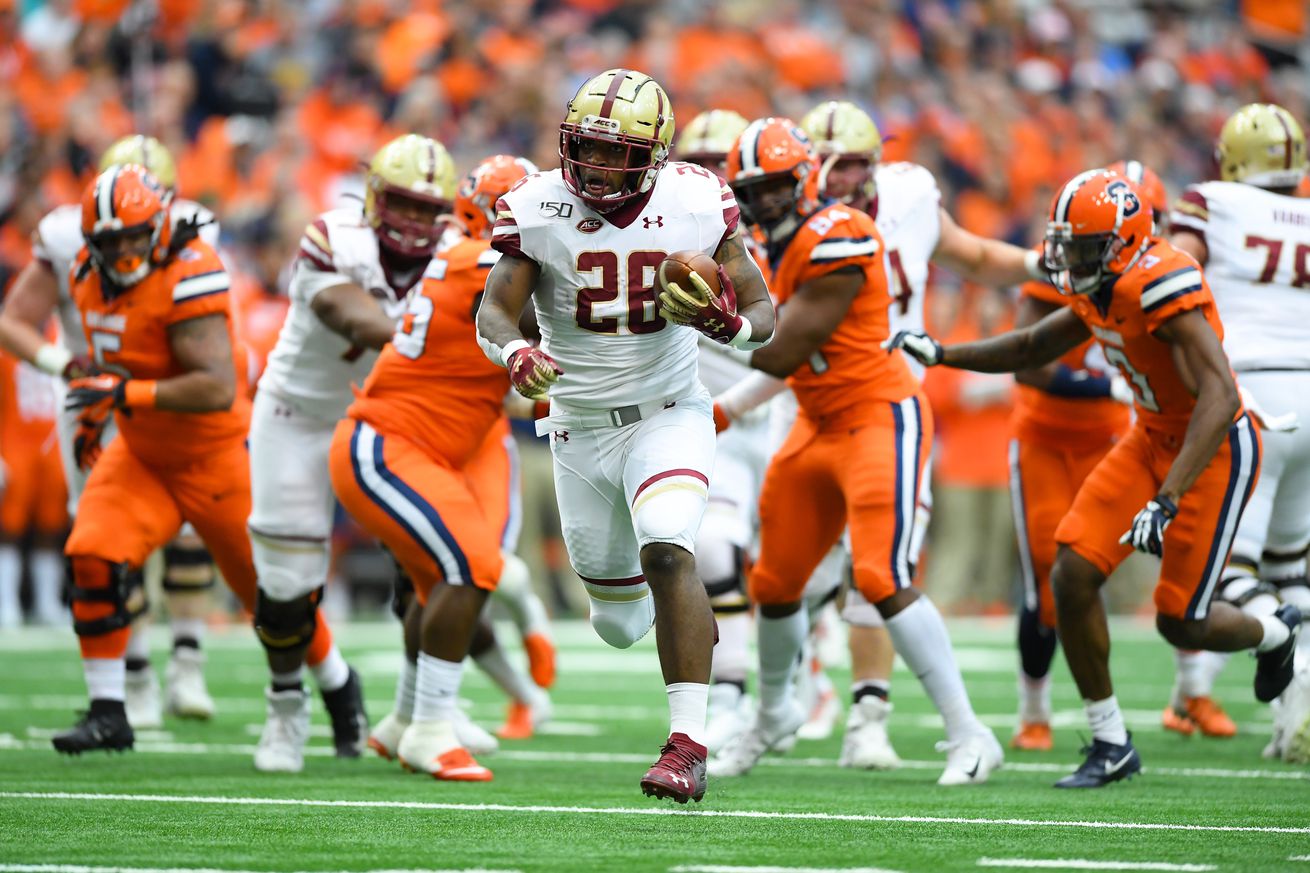 The Syracuse Orange are back at home once more this weekend, to take on the rival Boston College Eagles. As you know, SU’s in a bit of an injury-induced freefall at the moment, having lost four straight games. Meanwhile, BC tested a Trevor Lawrence-less Clemson team last week before picking up loss No. 3 on the season.

Last year’s matchup between these two teams went pretty disastrously for Syracuse. So can we expect more of the same? Here are five things to watch for on Saturday:

This isn’t a Steve Addazio Boston College team, so they actually know how to throw the football. That said, the offensive line has also struggled more than expected, so the Eagles could be susceptible to pressure if the Orange bring some from the linebacker or secondary spots. BC’s allowed 22 sacks this year (100th in the country), and grades out just below 60 according to PFF’s passing grades, when under pressure.

Interestingly, he grades out a lot better when blitzed (73.3), though is also a little less accurate at just 55.1%. Syracuse’s pressure has failed to get to opposing passers for much of this year, but hopefully that shifts in this game. The secondary can make something happen out of chaos, of course. It just can’t be the only stop gap against this Eagles passing attack (still feels weird to say).

We can probably assume that Ifeatu Melifonwu will cover Zay Flowers for most of the game, and that’ll be a fun matchup to watch. Garrett Williams most likely gets C.J. Lewis or Jaelen Gill, but Syracuse can’t ignore long. The tight end was my preseason All-ACC pick for that position and he’s delivered so far, ranking just behind Flowers in receiving yards (478) and receiving touchdowns (3). This is where Trill Williams would be extremely helpful as he’d be the perfect man to cover Long, but the safety just entered his name into the NFL draft. That means one of the young defensive backs in Rob Hanna, Ja’Had Carter, or Aman Greenwood gets a tough task in covering a 6-3, 253 lbs tight end. Someone needs to play man on him. If the Orange opt to go to zone coverage like the safeties have done for the majority of the year, Syracuse is almost inviting trouble as Long might just bully his way through the holes created in the middle of the field.

It looks like Syracuse will get Sean Tucker back this week and with Cooper Lutz coming off a strong game against Wake Forest can this tandem deliver a win? Tucker’s emergence has given the Orange a threat between the tackles while Lutz’s speed allowed him to get to the edge against Wake. The BC defense has allowed opposing runners to average 4.4 yards per carry this season so if Syracuse is going to accumulate yardage it seems like a heavy burst of Tucker and Lutz is their best bet.

Since no one else has, I’ll bite. It’s assumed and expected that Rex Culpepper will get the start. He’s the veteran, incumbent and will get the benefit of the doubt. The question will be, can he stand up to a decent Boston College defense. While they’re not world beaters, they were able to hold Clemson in check for more than a half, and clock in at 36 in the PFF rankings on the year. If Rex struggles, is Dino quicker to give him the hook than last week? We’ll see moving forward.

Andy: What do the Orange have in Cooper Lutz?

Sean Tucker missed the Wake debacle with an injury, and with the already deep list of injuries and opt outs to the rest of the backfield, the Orange were left with Markenzy Pierre and Cooper Lutz. Pierre, expected to be higher on the depth chart at the onset of the season, got snaps, but Lutz was the far more impactful back, mostly because of his pass catching abilities. This is expected as the redshirt sophmore came in as a wide receiver, but he looked great out of the backfield in the H-Back role we were clamoring for Jawhar Jordan to fill before his injury. With BC knowing what Lutz will attempt to do based on the Wake tape, will he be as effective? Or will he be unable to replicate the production. Knowing the answer to this question could be a big part of the Orange offense once Tucker returns that has been lacking this season.

This article was originally published at http://nunesmagician.com (an SB Nation blog). If you are interested in sharing your website's content with SCACCHoops.com, Contact Us.
Categories: Boston College, Football, Preview, Syracuse