Syracuse fell at home to Colgate for the second straight season. 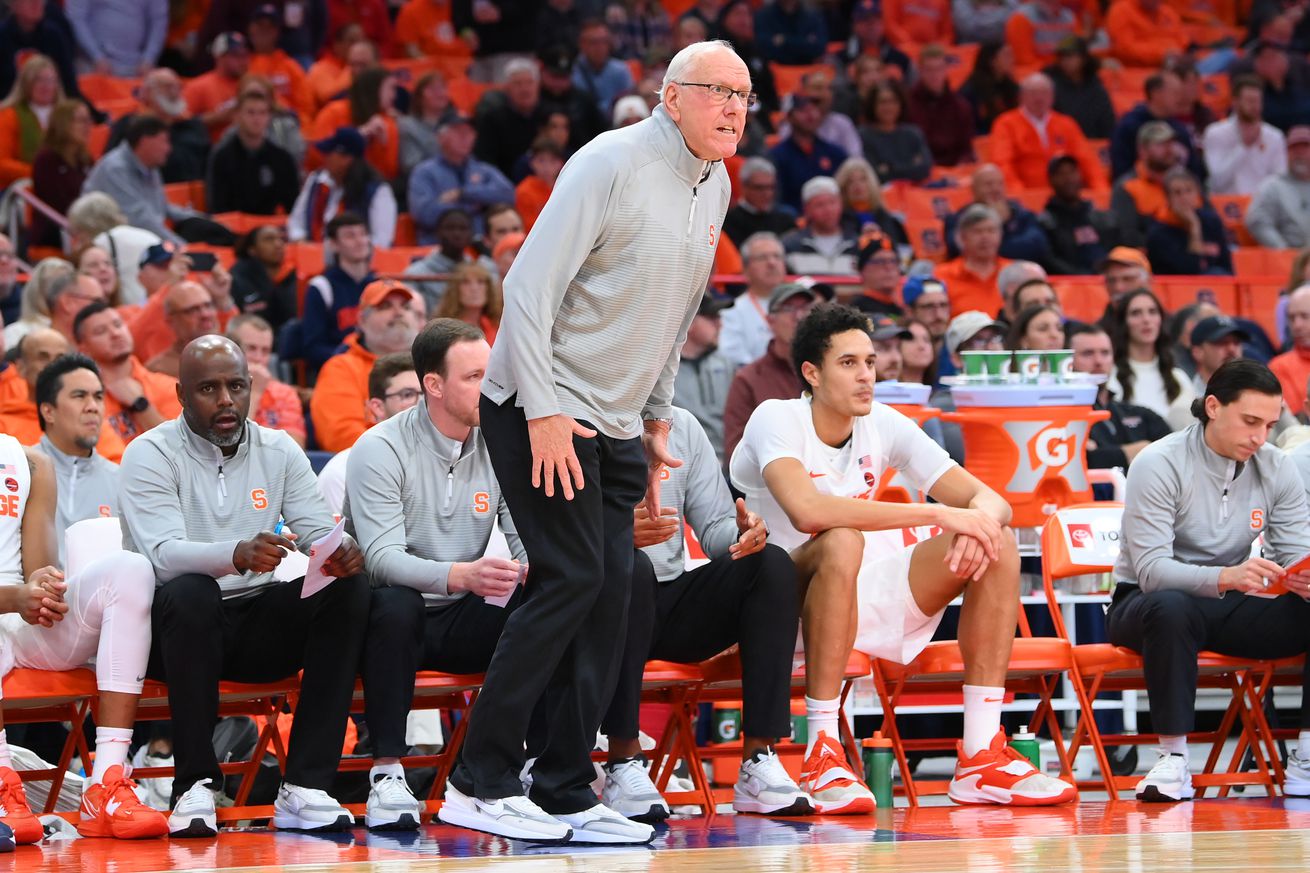 The wind was taken out of Syracuse’s sails early this season.

The 174th meeting between the Syracuse Orange men’s basketball team and the Colgate Raiders concluded with an 80-68 Syracuse loss. The Orange fell to its most frequently played opponent and dropped to 1-1 on the season.

Syracuse’s defensive looks might’ve been different from a season ago, but Colgate’s shooting effort mirrored that of the last meeting. Matt Langel’s club shot 19-38 (50%) from the three point line, besting last season’s 18-made triples.

Ultimately, Colgate once again came into the dome and played disciplined basketball and handled the Orange.

No defending that defense

There’s no dancing around this issue. The Syracuse defense needs work. That was to be expected with six freshmen, but Syracuse stuck to playing its experienced players when fighting from behind.

Colgate came into the night as the best two-point shooting team in the country, but the end result might as well have been a carbon copy of a season ago. The Syracuse defense was dissected by a methodic Raiders offense which led to hot outside shooting.

Syracuse first came out in man-to-man defense and quickly fell behind. It went to a 1-3-1 zone at around the 12 minute mark and after another five minutes the traditional 2-3 zone made its first showing. Neither to much avail.

Colgate worked the ball with intent against the zone with ball fakes, entry passes into the high-post and sprayed it out to shooters for open looks. Syracuse defenders were late on close outs and struggled to stay down on shot-fakes all night.

For the final five minutes of the first half, Boeheim went to the full-court press while reverting to the 2-3 zone in the half-court. That defensive look continued for the entirety of the second half.

Colgate handled the press with good spacing and patience. The Raiders passed out of traps. It didn’t rush and it avoided making too many mistakes against pressure. Colgate shot 47.5% from the floor and 50.0% from three and finished with 22 assists on 28 made field goals.

Irrespective of defensive scheme, that end of the floor still needs work if Syracuse wants to avoid a fourth consecutive season of playing defense that leaves much to be desired.

In attempt to mount a comeback, Boeheim shortened his rotation in the second half and went with his veterans plus freshman Judah Mintz. Symir Torrence, Joe Girard, Benny Williams and Jesse Edwards saw the lion’s share of playing time along with the talented freshman. The three guard lineup saw extended time with Torrence dropping to the back of the zone.

Chris Bell started the second half briefly. Quadir Copeland gave Torrence and Girard a quick blow and Mounir Hima did the same for Edwards. Justin Taylor saw a few minutes late, but those are all caveats. By and large, Boeheim went with his veterans when fighting from behind.

It was an early and perhaps unsurprising look at who Boeheim will turn to when it matters most.

Two things can be true

Should Syracuse beat Colgate on its home floor? Undoubtedly.

Nobody is making excuses for Syracuse. It’s never good to lose a buy game to a team you should beat on paper. That’s another tough early season loss for this program.

Let’s also not forget that Matt Langel has had Colgate in three straight NCAA Tournaments. That was a well-coached, disciplined basketball club that was well-prepared to face Syracuse. There’s a reason the Raiders were the preseason favorite to win the Patriot League.

Credit to Colgate. But yes, Syracuse should win that game. That’s a discouraging loss and nobody is denying that.

This article was originally published at http://nunesmagician.com (an SB Nation blog). If you are interested in sharing your website's content with SCACCHoops.com, Contact Us.
Categories: Basketball, NCAA Tournament, Recap, Syracuse, Video