Let’s return to simpler times when the most notable thing about this matchup was Hugh Freeze coaching from a bed. 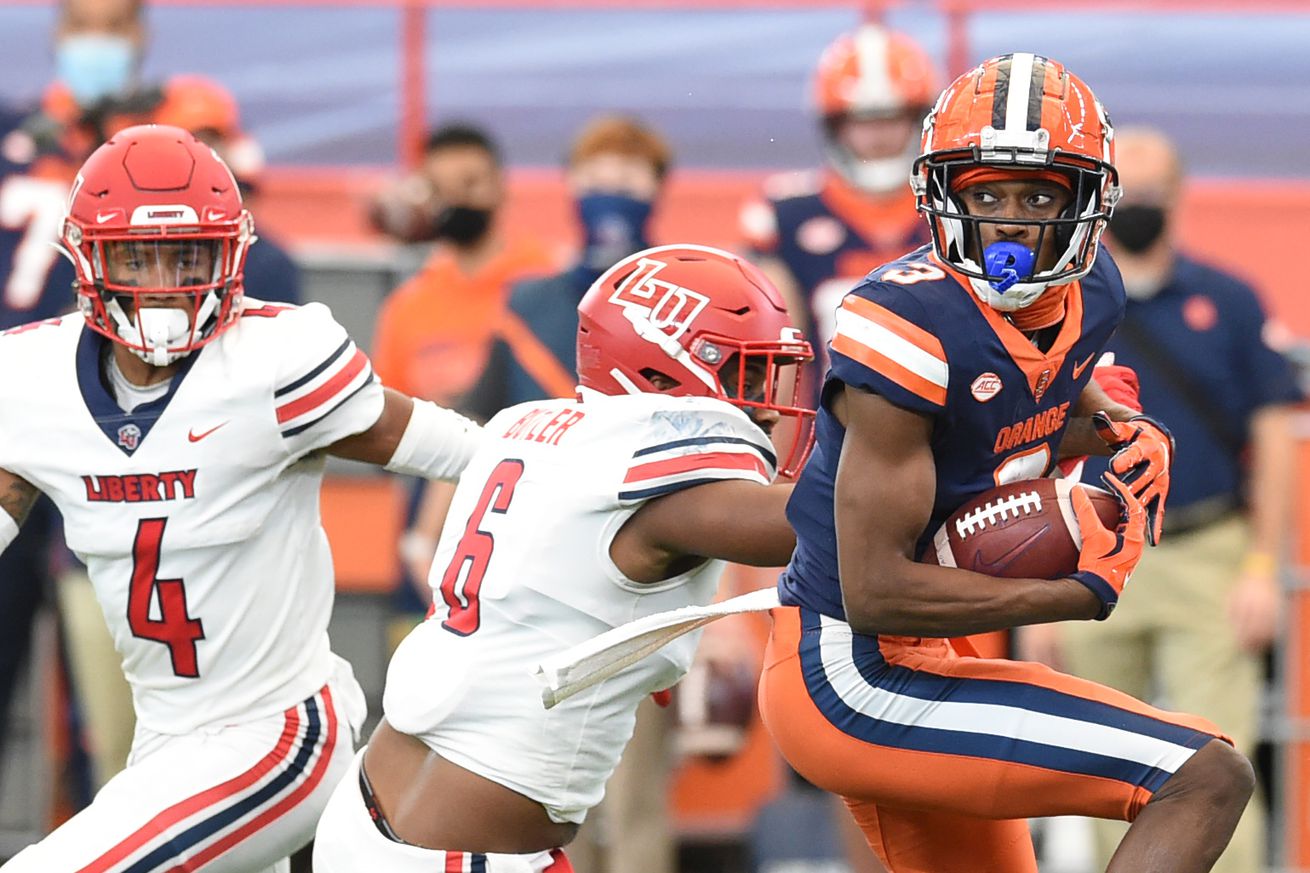 The Syracuse Orange football team is 2-1 on the season following a lopsided victory over Albany last weekend. But you know what’s better than a 2-1 record? A THREE and one record. It’ll be no easy feat to beat the Liberty Flames on Friday night, but the hope is that SU can put together a stronger effort than they did last year and pull off a win.

So what should we be watching during the game? And no, that’s not a cue, Jerry Falwell Jr...

Last year the Orange did a decent job keeping Malik Willis in check but it would help Syracuse if they can repeat that on Friday night. If the Syracuse front six can keep Willis in the pocket they can force the talented quarterback to beat them with his arm and not with his legs. This is an opportunity for Mikel Jones to make a statement as there will be lots of NFL scouts keyed in on Willis. To pull off the upset, Syracuse needs to force Liberty to play a patient game on offense and not letting Willis break down defenders on the edge will go a long way towards doing that.

Adjust for opponents, of course, but Liberty has managed 10 sacks through three games and a bunch of that pressure has come from the interior (in particular, tackle Kendy Charles has four of them). Coincidentally, the interior O-line has been an issue for Syracuse in recent seasons and who knows if we’ll have Chris Elmore back for this one to help alleviate some of those issues. If Liberty can collapse the pocket into Tommy DeVito and force him to roll out and make throws on the run (or just take sacks), it’s going to be a long day.

I know, I know, this is in a vein to everything we’ve said this year but hear me out. While we have said it this season a few times against a single playmaker like Willis and with what are assumed to be a few injuries per Coach Babers yesterday, it’s even more important to keep those legs fresh. The need for a steady diet of Sean Tucker eating clock and battering the Liberty defense and DeVito finding his receivers sustaining drives, could have a major impact late in the game.

Andy: Will Duece/Garrett Prove themselves?

Following Kevin’s idea of making Willis one dimensional, the Orange are going to win if the dynamic QB throws more than he runs. However, if he does try to pass, Syracuse’s zone coverage this year has been less than ideal, and keeping Willis in the pocket only works if he doesn’t have spaces to throw the ball towards. Enter Duece Chestnut and Garrett Williams. We’ve talked about both players individually, but what will define the Orange’s chances of winning this game and winning 6 games this season is their ability to become a shutdown corner combo that frees up the rest of the defensive backs and linebackers to support each other in coverage. If Chestnut and Williams are able to lock down the Nos. 1 & 2 receivers Friday night, the defense will be something we’ve never seen under Babers before.

Christian: Give DeVito an option.

Let’s face it - Liberty’s defense is probably better than Albany. No getting around that. That probably means that Syracuse can’t use the same game plan as last week to just give the ball to Sean Tucker and let good things happen. Someone from the Syracuse wide receiver group needs to give DeVito a reliable option. He’s not going to get away with throwing less than 12-15 times this week. As much as we would like Tucker to get 20 carriers, he’s probably not getting to 150 yards.

So someone needs to be an option for DeVito. Taj Harris’ status is still unknown, and Luke Benson is now out after being the No. 1 target on the first drive of the Albany game. Can Anthony Queeley break out for more than 3 catches? Can Damien Alford use his size advantage to bully corners in a brutal mismatch? Someone has to step up to help the QBs.