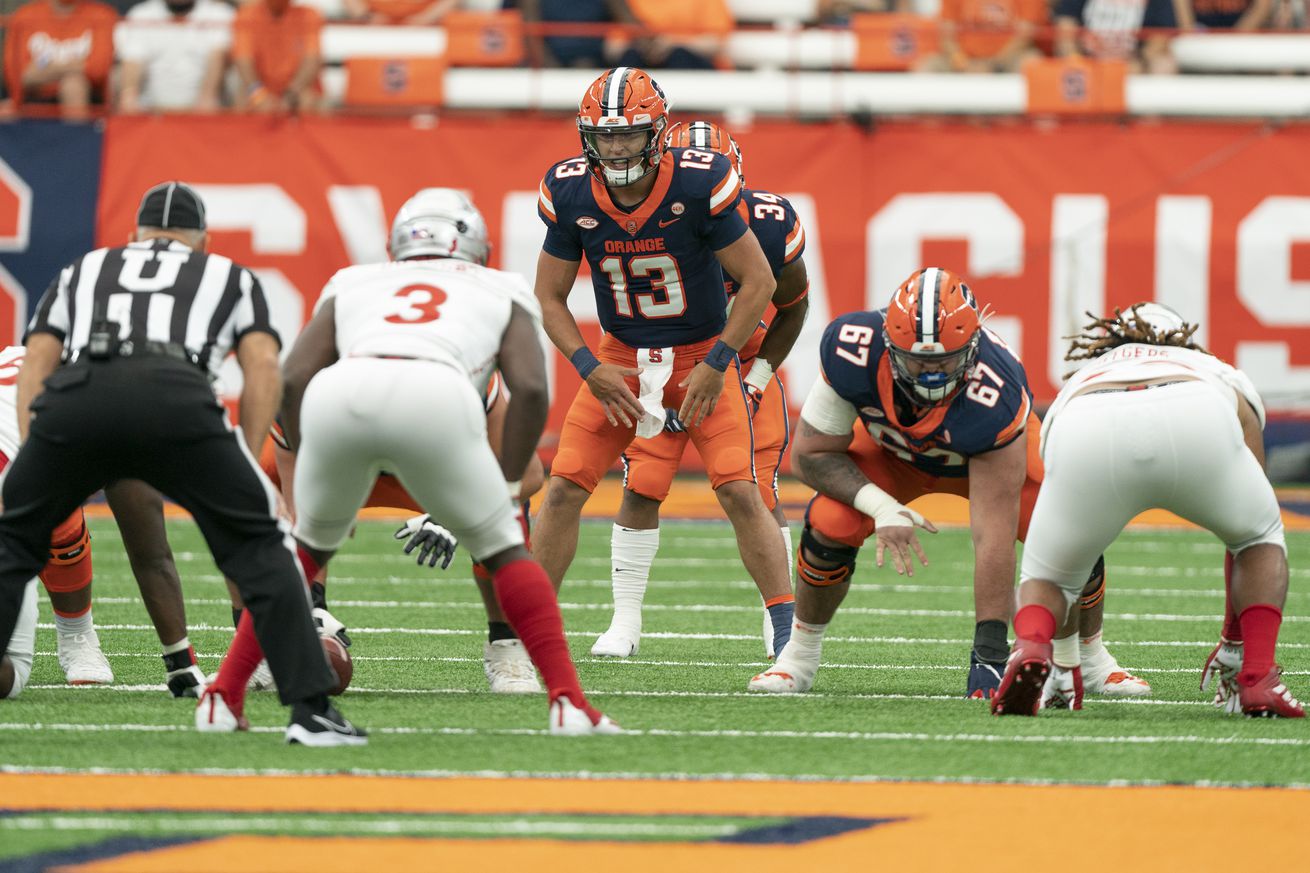 When speaking to media on Tuesday, Syracuse Orange quarterback Tommy DeVito mentioned that, he was asked about his play through two games and the (it would appear) ongoing competition with Garrett Shrader. He had this to say in response:

He also noted that he’s “done exactly what (he’s) needed to do on this field” to remain the starter.

To many Syracuse fans, this may seem like an incredulous take on how he’s performed thus far. In two games, DeVito’s 26-of-43 for 246 yards, zero TDs and a pick (plus a fumble). He’s also run for 62 yards and a touchdown. But the focus for frustrated Orange supporters is the low yardage total and lack of touchdowns. Obviously SU’s offense has struggled for over two years now. And since Tommy’s been the QB for a lot of that time, there’s reason to question him.

While I won’t make the case that DeVito’s playing incredibly well or is on par with a quarterback like Eric Dungey, I do think DeVito’s largely correct that he’s done what’s he’s needed to do to retain his job. Shrader played three drives vs. Rutgers last week, and looked dreadful on two, then wasn’t bit for taking risks on a third. He seemed to run a more capable no-huddle offense to some extent and went through progressions. But it’s not as if he lit the world on fire.

Putting him in also seemed to derail what DeVito had going on in the passing game. Tommy was 7-of-8 when subbed out for Shrader in a contest tied at 0-0 in the second quarter. We already talked about how puzzling and nonsensical it was to make that switch given the flow of the game. But it did seem to create problems that lasted for the rest of the afternoon. He was just 8-of-18 during the rest of the game — a stretch that included seven straight passes and play-calling’s complete ignorance of the rushing attack directly following a Sean Tucker touchdown run.

Two of the incompletions above were drops by receivers, though I’m honestly surprised PFF only has two in there given what we witnessed on Saturday alone.

So what’s the problem for Tommy?

The line has improved dramatically, yes, though would caveat that with they’re a much better run-blocking unit this year than last, which means the run game is more of a factor, so opponents can’t just send the house against Syracuse as they have in the past. Of course, that also requires you to hand the ball off — something the Orange did not do following Tucker’s TD. When you keep calling pass-plays (in part because you have to as a result of being down 10 late in the fourth), you’re going to see more pressure and DeVito did vs. Rutgers. He clearly suffers for it as a QB that doesn’t fare well under a lot of pressure.

Play-calling is another. Like we said, between the QB switch and an over-emphasis on the passing game in the second half, that’s two issues that didn’t need to be there. Failing to create as many slot routes for Taj Harris since his move inside could be another (though Rutgers may have also put an emphasis on SU’s top target as the game wore on).

But the other question around Tommy is the one that falls most to him; Decision-making, and how that affects a lack of risk — and as a result, a lack of big plays.

What fans seemed to enjoy about Shrader’s third and final drive on Saturday was the fact that he improvised, took risks and threw on the run. While that’s largely because fans are still pining for Dungey to be under center, the emphasis on risk is worth diving into.

DeVito still struggles to go through his progressions and typically locks in on a receiver. This isn’t an issue when they’re open (a completion to Courtney Jackson the other day showed this in action), but becomes more of one when that player is blanketed and he’s forced to make additional reads.

The fact that DeVito has quickly opted for safety valves (7-of-7 behind the line this year) is smart to some degree, but it also means the passing game isn’t trying many chunk plays — something further underlined by the fact that over 75% of his throws have hit targets nine yards or fewer away from the line of scrimmage. He’s done well on those, sure. But they’re not taking risks and they’re not taking the top off the defense as this scheme traditionally calls for and his arm strength indicates is possible.

DeVito now owns the school record for most completions without an interception, though that streak was broken late in the fourth quarter on Saturday. And while that sounds great, it’s more indicative of his aversion to taking risks over his ability to be incredibly efficient or accurate. Now the bigger question is whether that’s a product of his own (cautious) decision-making, play-calling or both?

I don’t think DeVito’s done enough to lose his job, so by default, he’s done enough to keep it. But if Dino Babers and Sterlin Gilbert are going to be here at the end of the season, then something needs to adjust in the passing game. Either play-calling dictates that DeVito takes greater risks, he’s subbed for someone (Shrader or others) that embraces that mentality, or the team leans on its natural strength in the run game as much as possible.

Clearly the plan vs. Rutgers didn’t work in the second half aside from one drive. And while we’ll likely see more QB platooning against Albany, hopefully that’s in service of reaching a final decision about what this offense is supposed to look like for the rest of 2021, instead of more playing around with situational football.