For better or worse, DeVito is likely Syracuse's starting QB

Reading the very limited tea leaves available, I’m willing to go out on this limb. 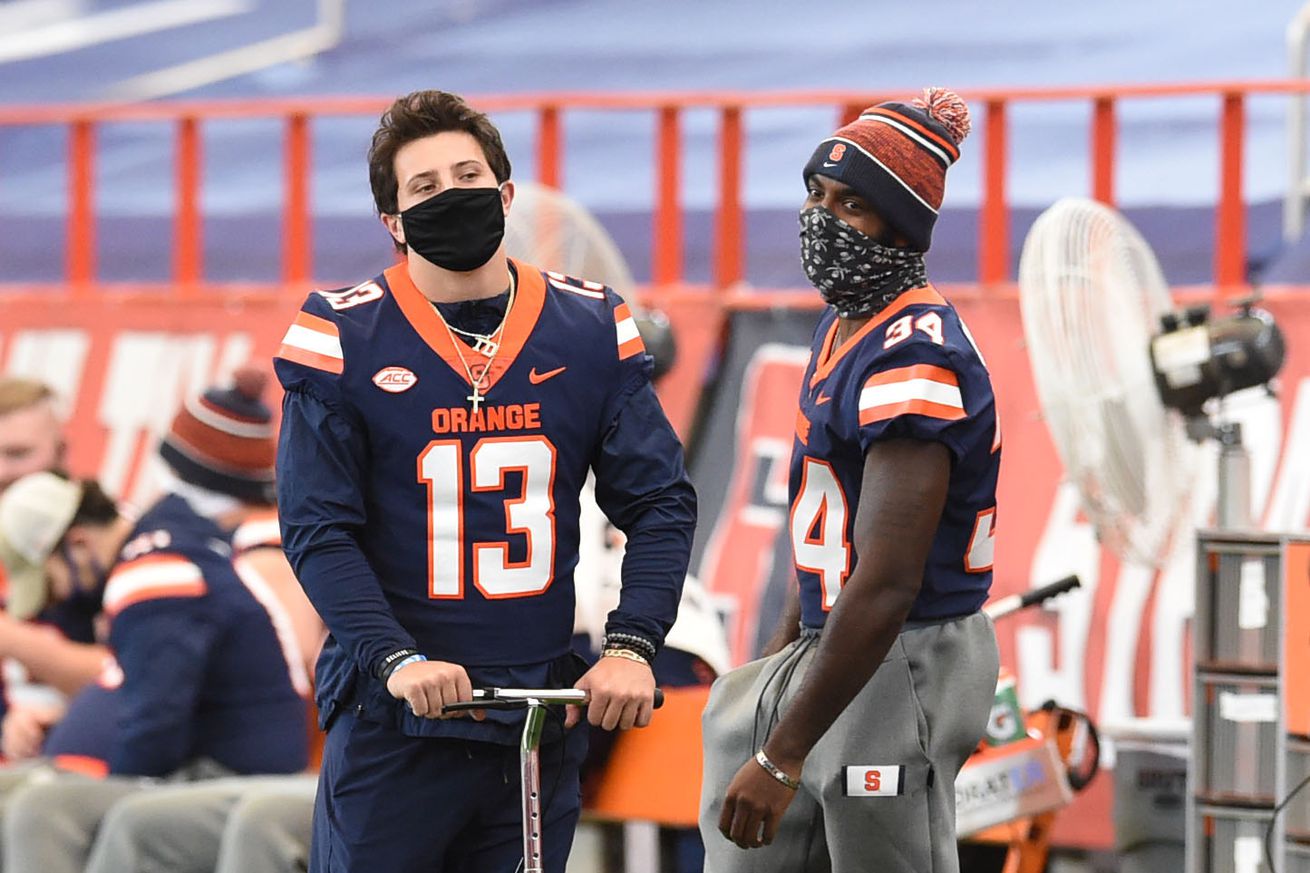 While the spring football season may be over for the Syracuse Orange, there is still plenty to talk about before the fall’s practices begin. The biggest topic of conversation will continue to be the quarterback position, as Tommy DeVito is returning from injury and competing with transfer Garret Shrader for the starting position.

I’m here to make a bold proclamation on May 6: the quarterback competition is probably over already. Tommy DeVito is more than likely to be the starting quarterback when the Orange line up versus the Ohio Bobcats in September.

Granted, this has not been said by any member of the Syracuse coaching staff or team in any way, but there are enough snippets of information to feel as if things aren’t as close as some fans may want them to be.

First, offensive coordinator Sterlin Gilbert said that Shrader still had to learn the offense when asked about the QB competition in the preseason huddle for season ticket holders. This by itself isn’t damning in any way; Shrader hasn’t been on campus long and spring ball is designed exactly for this kind of acclimation.

In addition to Shrader just getting to campus, he’s also not seen any meaningful game minutes at quarterback in over a year, and while he was promising in what he showed in 2019 for Mississippi State, there will be rust to knock off, be from his arm or legs. Some signs coming out of camp (read Stephen Bailey’s excellent takeaways behind the paywall) are seemingly insinuating that rust is a bit of an issue at present.

This decision isn’t solely because Shrader hasn’t materialized into senior year Eric Dungey. Dino Babers has a specific vision for quarterbacks, and typically likes to stick with “his guy.” At Bowling Green, Matt Johnson went down with a season ending injury in 2014, forcing James Knapke to start 13 of 14 games. Knapke was named MVP in the team’s Camellia Bowl victory, but in 2015, Johnson was the starter all season, threw for over 5,000 yards, and led the team to a 10-4 record.

When you look at what’s occurred at SU, Eric Dungey’s been the starter save when he hasn’t physically been able to plus the end of the 2018 North Carolina game. Other than that, he’s been the guy. Same goes for DeVito, really, who’s started whenever healthy enough to do so. You could argue this loyalty to the established starter has had a negative impact on recruiting, and wouldn’t be blamed for believing as much. Alas, a separate topic altogether...

So do I think the coaching staff lied to Shrader when they said he would compete for the starting job? No. DeVito needed to show that he was fully recovered from a serious injury, and going through 2021 without a ready quarterback is way to guarantee a job search in the offseason.

However, Dino has a habit of staying with the same guy, but also his last three “guys” were Jimmy Garoppolo, Johnson, and Dungey. While the past year and a half is the first time he hasn’t had someone that fans were 100% sure was the choice, I truly think that Dino believes DeVito is in that same aforementioned group. All of this together makes me believe that pending health (always a concern with this team). DeVito is the anointed starter once more.

That belief with minimal evidence will ultimately define the perception of Babers to a fan base that expected Shrader to be an immediate impact transfer. While DeVito isn’t the only key to the Orange’s success (hi, offensive line!), his success or failure will have a direct correlation to Babers’s standing within this fan base. And potentially his job security beyond this season, too.