After watching some of the games yesterday, it wasn’t a surprise to see both teams start the game with a lot of nervous energy. That resulted in some erratic basketball. A three-pointer by sophomore guard Trey McGowens was the lone field goal for the Pittsburgh Panthers going into the under-12 media timeout. 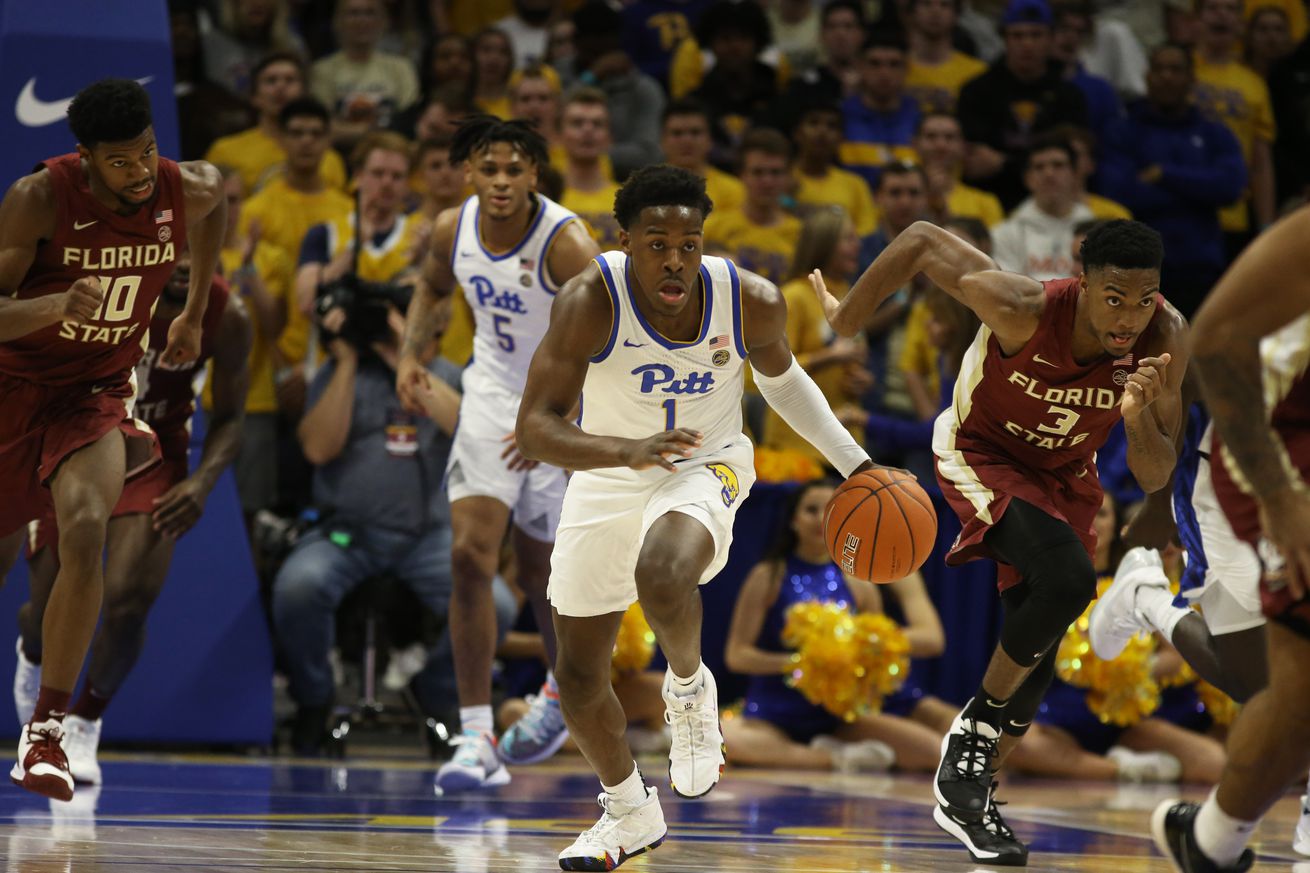 The Florida State Seminoles didn’t fare much better, managing a paltry 4-13 from the floor at the same juncture. Both teams traded sloppy possessions with Florida State slowly taking a 6-point lead, 18-12, before junior guard Ryan Murphy breathed some life into the Pitt offense. He connected from long distance twice in less than a two-minute span to help the Panthers close the gap towards the end of the half.

After the game, Murphy was asked if knew he’d be able to have the kind of impact that he did, “When you put the work in, it just translates on the court.”

Pitt briefly took a 4-point lead on a triple from sophomore guard Xavier Johnson with 1:27 left in the half, but some more sloppy play allowed the Seminoles to the tie the game at 25 going into the half.

For the half, the Panthers were 6-25 (24%) from the field; FSU was 9-29 (31%). Both teams combined for just 7 assists and a whopping 18 turnovers. The Pitt defense was pesky, especially on closeouts and taking away the primary passing lane while forcing players baseline from the corner.

That energy didn’t continue to start the second half, however. A 7-1 run by Florida State, more specifically by sophomore forward Devin Vassell all by himself, forced an early timeout by head coach Jeff Capel. For the first 8 minutes of the second half, it just started to feel as though the Seminoles would just run their offense and play good enough defense to start pulling away, slowly.

Freshman forward Justin Champagnie and Johnson had other ideas. They splashed back-to-back three-pointers sandwiched between two FSU turnovers that gave the Panthers a 41-40 advantage with just over 10 minutes left in the game. After a brief emotional scuffle between the teams, McGowens connected from long distance that gave Pitt a very brief 4-point lead.

Triples by senior guard Trent Forrest and Vassell put Florida State back up by a possession. Both teams traded baskets down the stretch, neither able to take more than a possession lead. Junior forward Terrell Brown played a big role in that for the Panthers. His 11 second half points off the bench helped Pitt take a 3-point lead with just 2 minutes left in the game.

A late miss by Forrest followed by two clutch free throws by Murphy ultimately sealed it for the Panthers. Despite McGowens splitting his pair of free throws on the following possession, Forrest again came up empty on the ensuing possession, and Pitt emerged victorious, 63-61.

Johnson, Brown and Murphy were tied for a team-high 13 points. As a team, they finished 16-51 from the field, but out rebounded the Seminoles 37 to 35 and attempted 31 free throws versus just 15 for FSU. Brown on out rebounding their opponent: “Coach drilled that it’s going to be a team rebounding effort.” Capel said, “It was the key to the game” when asked about the rebounding margin.

On getting to the free throw line as much as they did, Florida State head coach Leonard Hamilton said after the game, “They did a much better job of playing to who they are, then we did.”

Forrest led the Seminoles with a game-high 19 points on 8-16 from the floor, but the Seminoles had 3 players foul out and another player with 4 fouls.

On their commitment to attacking as much as possible, Brown credited Capel’s message in practice: “They are big, but they’re going to foul out.” Capel followed that up in his post game press conference by simply saying, “It’s what we do.”

The Panthers will take on the Nicholls Colonels (0-1) at noon this Saturday.

This article was originally published at http://cardiachill.com (an SB Nation blog). If you are interested in sharing your website's content with SCACCHoops.com, Contact Us.
Categories: Basketball, Florida State, Pittsburgh, Recap, Video