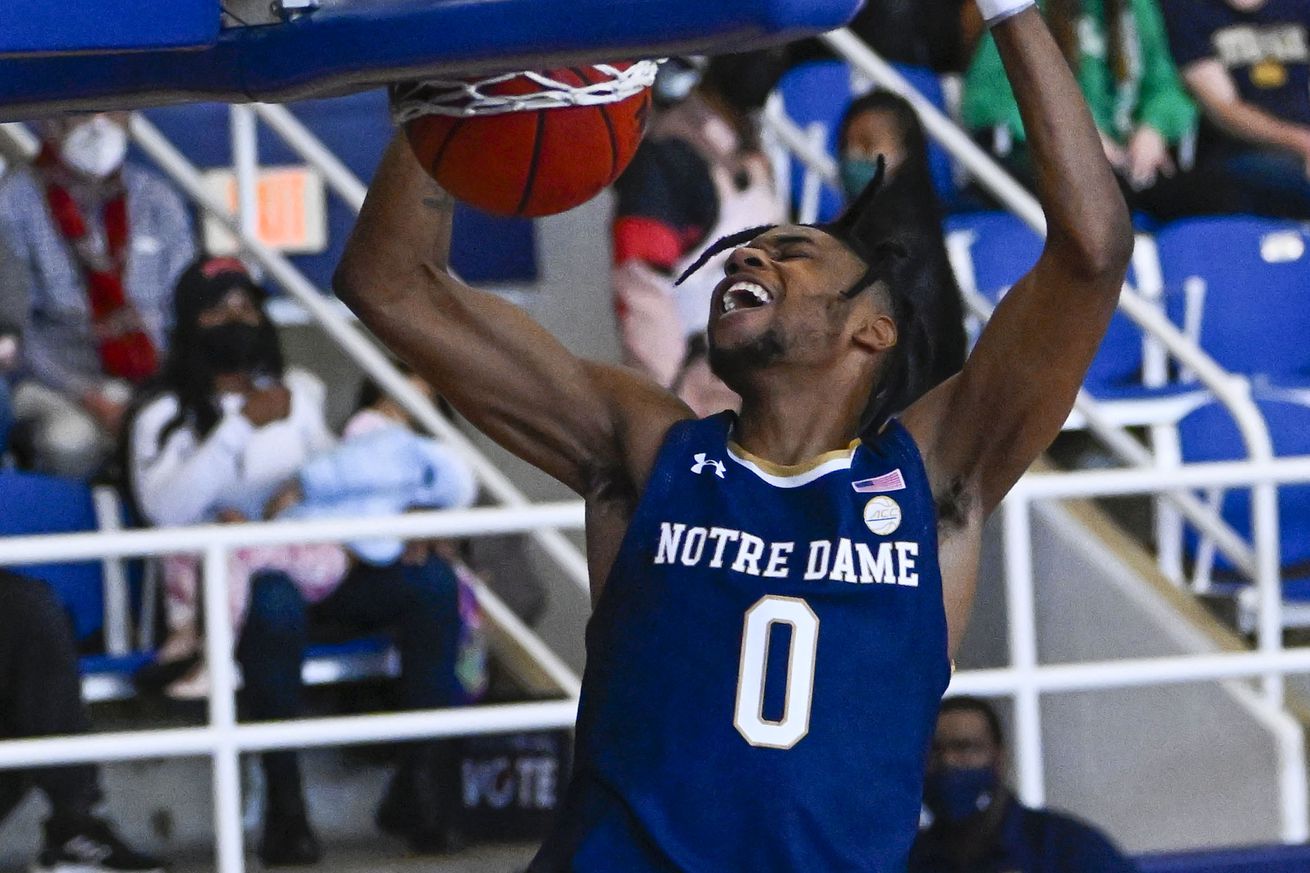 The Notre Dame Fighting Irish men’s basketball team defeated the Howard Bison this afternoon, winning by a final score of 71-68 at Burr Gymnasium.

Nate Laszewski had a huge day for the Irish down low, leading the Irish in minutes played (36), rebounds (13), and assists (2), as well as sharing the team lead in points (17).

Dane Goodwin was another key force on offense, posting 17 points to tie Laszewski for the team-high on the day, with Blake Wesley chipping in from the backcourt as well (13 points, 4 rebounds, 2 steals). Notre Dame was efficient in a game that Howard continuously threatened to take the lead in (and for a brief stretch did lead), shooting 52% from the field on the afternoon.

Steve Settle led the way for the Bison, with his 25 points leading all scorers, while also adding 5 rebounds and a pair of steals. Guards Kyle Foster (12 points, 4 rebounds) and Elijah Hawkins (12 points, 5 assists) were also key in Howard’s effort.

What appeared to be a mismatch on paper proved to be quite the competitive (and entertaining) game, as Howard went blow for blow with the Irish from the first tip to the final whistle

The Bison jumped out to a quick 4-0 lead as Notre Dame struggled to hit their shots early on, and halfway through the first still only trailed by a point, with the score line at 16-15 in favor of the Irish.

And while the rest of the first half saw a generally stronger Irish performance, highlighted by two consecutive Blake Wesley dunks to bring the score to 25-17 with 6:41 remaining, Howard would claw back within one by the halftime whistle thanks to a Khalil Robinson buzzer beater.

The Bison would start off the second half red hot, building on the momentum from the end of the first half and notching two consecutive three point plays in the first three minutes to build a 36-31 lead.

But the Irish recovered following a Mike Brey timeout, going on a quick run of their own to level the scores at 36 following a big and-one bucket by Laszewski.

With the score once again tied, the teams went back and forth for a few more possessions before the Irish opened up a 17-4 run over a six minute span that would secure a 12 point cushion with seven minutes to go.

But late, the Irish very nearly crumbled. Down 11 with just under three minutes to play, Howard went on a 12-2 charge to make the game once again a one point affair with 30 seconds left, at one point capitalizing off a stretch of four Irish turnovers in five possessions.

With that one point lead and the ball once again in their hands, the Irish turned to Prentiss Hubb. And the senior guard came up big when he was needed most, driving the lane and laying in the bucket that would require Howard a three to tie the game at the buzzer.

Howard would get that final shot off, but Elijah Hawkins buzzer-beating attempt hit off the rim, allowing the Irish to survive 71-68.

With the win, the Irish improved to 11-6 overall with wins in 8 of their last 10 games. They’ll now look ahead to the final contest of their three game road swing on Saturday afternoon, when they’ll travel to the KFC Yum! Center to take on the Louisville Cardinals.

This article was originally published at http://OneFootDown.com (an SB Nation blog). If you are interested in sharing your website's content with SCACCHoops.com, Contact Us.
Categories: Basketball, Notre Dame, Recap, Video