Battle of the Boeheim’s: Part Deux 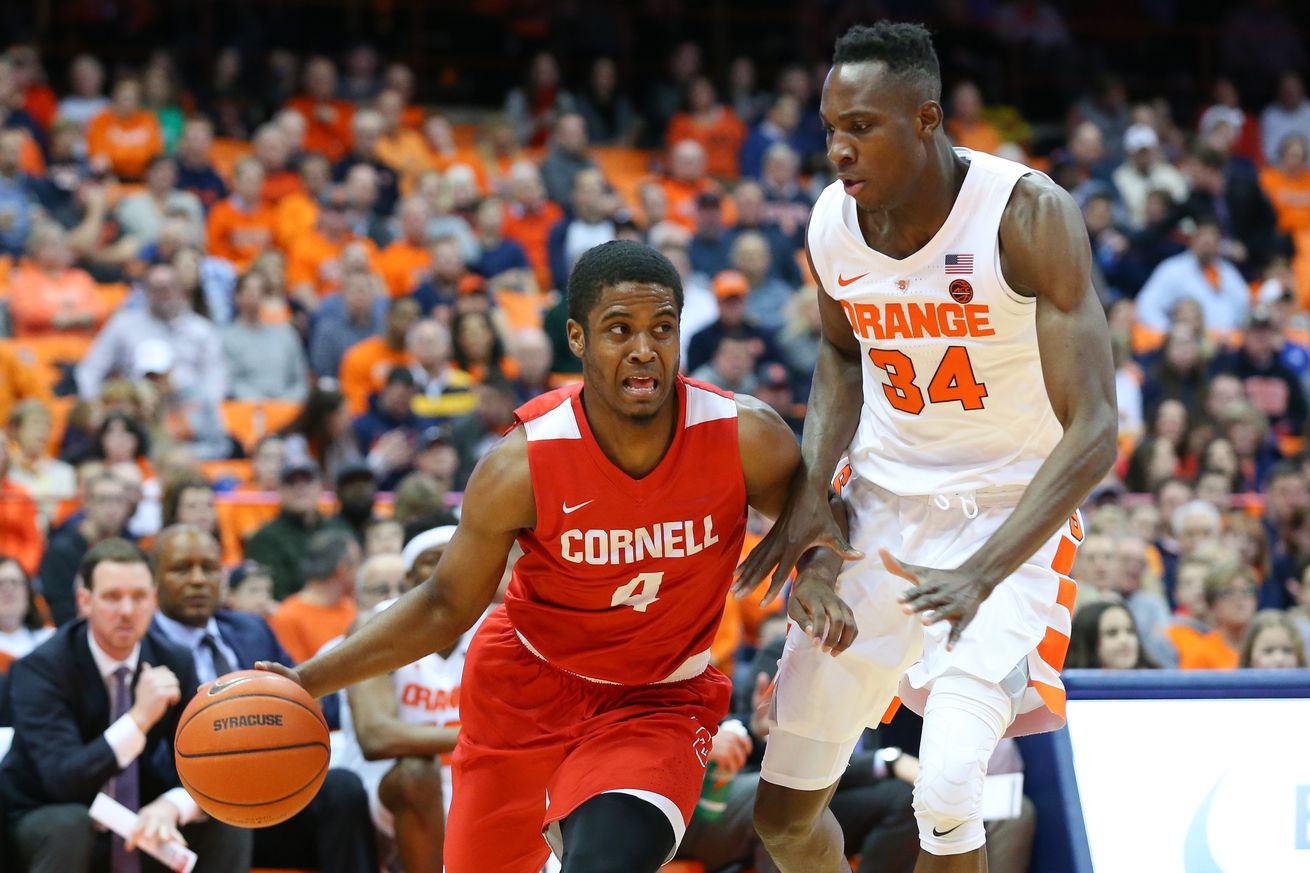 It’s game four of the Syracuse Orange basketball season, and we’re starting to get a preliminary sense of what this team is all about. This is a very different team than the past few years for SU, where the ball was dominated by only a few select players (Tyus Battle, Frank Howard, Oshae Brissett) and heavily focused on isolation.

This team likes to pass and get out in transition. One of my favorite sequences from the Seattle game was early in the first half when Syracuse got a stop on defense. Bourama Sidibe went flying down the court, beating pretty much the entire Seattle team back, got the ball from a nice Joe Girard pass, and got fouled in transition. Even though he didn’t convert the layup, it was a thing of beauty to watch.

It signifies the real opportunity for change with this Syracuse basketball team. They are young. They are athletic. They also seem very coachable and willing to do what’s best for the team. I’ve always thought Boeheim does his best coaching jobs in the “down years”, and I think this year will be a great example of that.

With that said, let’s discuss the five things to watch for in tonight’s game against the Cornell Big Red.

1. Battle of the Boeheim’s: Redux

For the second straight year, Jimmy Boeheim will face off against Buddy Boeheim on the court at the Dome, with dad on the sidelines coaching and mom and sister in the stands watching.

Honestly, I love this narrative. Jimmy and Buddy have both developed into well-rounded basketball players. You can argue that both are well ahead of schedule; in fact, Jim Boeheim noted as much about Buddy earlier this year. Both have become leaders on their teams in short order, and both are major scoring threats.

Last year, it was Jimmy that played well, but don’t be surprised if both players have stellar games tonight in front of friends and family. Could Jim Boeheim ever have pictured a more perfect scenario for his family? I don’t think so.

In his first start, Joe Girard absolutely dominated against Seattle. He looked confident, poised, and played under control. He shined on offense, hitting seven of his eight shots (five for six from 3-point range), all five of his free throws, and dishing out two assists. But more importantly, he moved the ball incredibly well and tried to run at every opportunity.

The confidence Joe brings is a stabilizing force to this team. He doesn’t get frazzled and he is clearly not afraid of anything.

My one concern for Joe is on the defensive end. He has great footwork, instincts, and aggressiveness, but his small size and average athleticism mean that he is often out of position or not able to close out on the shooters. In one sequence in the second half against Seattle, his side of the zone gave up four consecutive three-pointers, all of them due to his inability to close out fast enough or by getting beat off the dribble.

He and Buddy at the top could be a major concern against fast, athletic guards. Hopefully his stellar offensive playmaking can continue to outweigh the defensive lapses, or we could end up losing some games when teams get hot. The lead we built this past weekend evaporated in a heartbeat in the second half, and that was only Seattle.

Let’s all just keep some cautious optimism with Joe.

Bourame Sidibe has looked good the last two games. Not just his offense and defense, but his actual conditioning, footwork, and general health. That’s what we need from him this year to be successful.

We don’t need Sidibe to dominate. He just needs to stay in the game, be enough of a pest down low in the post to keep his defender honest, rebound, and play solid defense. If he could give us six points, eight rebounds, and 20-25 minutes every night, I’d sign up for that today.

Right now he’s at seven points, seven rebounds, and 23 minutes per game through three games. Look for those numbers or more against Cornell.

4. Guerrier at the line

Get used to hearing this a lot. Syracuse basketball got a great player in Quincy Guerrier, and he’s finally starting to show why Jim Boeheim was so high on him. Against Seattle, Guerrier took 14 free throws! He only made eight, but most of his misses occurred early in the game. I think at one point he was one-for-five from the line, so he actually recovered quite well and has a solid looking stroke.

What really impressed about Guerrier was his aggressiveness and willingness to go up strong in traffic and fight through contact. Instead of hanging out on the perimeter, Guerrier was in the low block or out on the break in transition. He got all of his opportunities at the line by being aggressive and taking the ball to the rim.

We need more of that. He needs to fill Oshae Brissett’s role from last year, but hopefully with a slightly better shooting percentage. I think he has the talent to do it, and I think he has another good game against Cornell to help boost his confidence.

5. The development of Dolezaj

Marek Dolezaj was a man possessed against Seattle. If it weren’t for Joe Girard’s nearly flawless performance, Dolezaj was game MVP, hands down. The transformation in his game from last year to this year is exciting to see.

Yes, it’s early and we’ve only seen three games. But there is something different about Dolezaj this year.

He’s handling the ball like a guard. He’s lightning quick. He’s making passes even more impressive than last year. He’s shown soft touch around the rim. And he’s been far more aggressive looking for his shot.

We’ll see if Marek continues to look as good as the season progresses, but the development he’s made from last season to this is brazenly apparent so far. Look for him to stay aggressive against Cornell and have another solid outing. Is this the game he hits his first 3-pointer of the season? I’m going to go with yes.

This article was originally published at http://nunesmagician.com (an SB Nation blog). If you are interested in sharing your website's content with SCACCHoops.com, Contact Us.
Categories: Basketball, Preview, Syracuse