The Deacs could be favored in every game until ACC play begins. 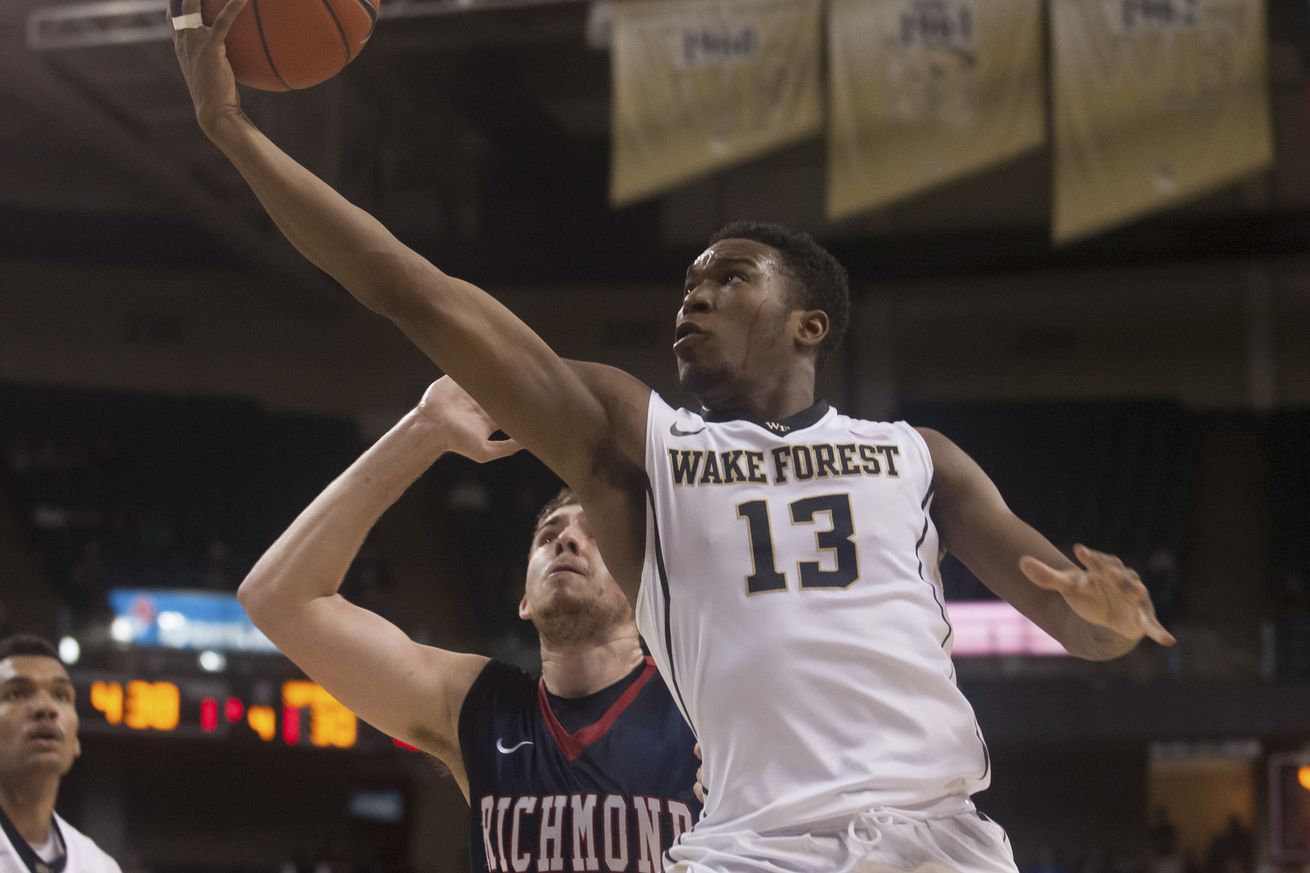 Earlier this morning/afternoon the Wake Forest basketball program went to Twitter to release the upcoming non-conference opponents for the 2017-2018 season. After a long day of URL refreshing, we now have the first twelve games of the highly anticipated 4th season of the Danny Manning era. If you missed the gradual reveal and just want the full entree all in one tweet, I’ll embed it below for you to catch up.

So what is my initial perception of the out-of-conference slate for the Deacs? Easy.

First and foremost, this non-conference schedule looks nothing like what we’ve seen in the past for Danny Manning teams. Wake will play only two true road games before ACC play begins, and they’re against UNC-Charlotte and Coastal Carolina, both of which finished in the 200’s in Kenpom last season. Compare that to 2016-17 when the Deacs took on Xavier, Northwestern, Richmond, UNCG, and Charleston all on the road before December hit. The year prior, Wake visited a competitive Bucknell side, Rutgers and Ben Simmons and Co all outside the ACC. I’m certainly not one to complain about more chances to watch the Deacs at the Joel, but in my mind there’s plenty of value in traveling to semi-tough environments before conference season starts to get a feel for the experience. This year, for better or worse, that won’t be the case for the squad.

Wake's basketball schedule shaping up to be much more manageable than last year's. More Clemsonish and less Mich Stateish

With Wake also heading to the Paradise Jam this year rather than Maui or Charleston for a preseason tournament, there was definitely an incentive to schedule tough opponents at the Joel outside of the already established series (Ex: Tennessee). After all, the quality of teams Wake is going to play over the course of their 3 games in the Virgin Islands is drastically weaker than the last couple of years. There’s no Vanderbilt, Indiana, UCLA, or Villanova walking onto the court at the Caribbean neutral site. In fact, the toughest road to the P-Jam Title (Tournament nickname still in Beta) is Drake, Colorado, and Houston. The former only won 7 games last year, while the latter two each got knocked out in the 1st round of the NIT. Simply put, it’s not exactly a resume boosting tournament lineup, and any slip up could be harshly pointed at in March if we find ourselves on the bubble once again.

On the other hand, Illinois and Tennessee are great matchups for Wake mainly because both of those teams could be postseason bound yet the Deacs will be favored at home. Any time you get a chance to beat a solid High Major team at the Joel you take it, though the lack of students for the Vols game due to winter break is kind of a bummer.

As for the rest of the schedule, Wake should be ready to dominate if it wants to avoid having any noticeable blemishes on its at-large bid. Georgia Southern, Liberty, UNCG, and Army are all potential 15+ point victories, with the Richmond game probably being slightly more competitive. These matchups have basically zero resume reward and a lot of risk, but the intangible benefits they can give a team through confidence and strategy/lineup testing make them a must-have on the schedule.

Also ACC/B10 Challenge and Richmond games both at home this year versus on the road last year.

Ultimately, do I think this slightly weaker non-conference schedule is going to end up hurting Wake? Not exactly.

Polls, bracketology, and media buzz in college sports are so incredibly susceptible to anchoring bias on a yearly basis. If a team is projected to finish top 25 at the start of the year but struggles, usually analysts and coaches will give them the benefit of the doubt for far longer than they should simply because that was the original expectation. It’s the same reason why it took a traditional “cellar dweller” like Northwestern months to be ranked last season despite the fact their resume was excellent for multiple weeks prior (They weren’t ranked until their record was 18-4 on Jan 30). Scheduling a brutal non-conference schedule to show you can actually compete is a solution to try and overcome the low expectations faster than waiting for the ACC season to start up. But with last season’s success and the media/coaches believing in Manning’s ability to bring the program back to relevance, the team can afford to kind of glide by and still be considered a top 40 team by the time the ACC rolls around.

If Wake avoids a realllly bad loss and finishes up OOC at 10-2, we still might be in the NCAA tournament conversation with the anticipation of a solid/good ACC performance. If the Deacs play this same exact schedule last year and finish 10-2 is Joe Lunardi even coming close to mentioning Wake in a Bracketology Update in December? Absolutely not. It’s funny what some success can do for a program, and I think Danny Manning now realizes the Deacs don’t need to exceed expectations in the non-conference to still be in the tourney discussion when the winter rolls around. If he wants to instead prioritize using November to get the freshman and sophomores prepared for the ACC and build team morale and confidence, I am all for it. 20 wins in 2017-18 sounds perfectly fine to me.

The quest for 20 wins is real. https://t.co/kNBAZTm0NZ

Later this weekend expect a full non-conference predictions article from the entire staff detailing how we think the 12 game schedule is going to end up. Until then, here’s to hoping the next 4 months go quicker than the last 3 have. Go Deacs!

This article was originally published at http://www.BloggerSoDear.com (an SB Nation blog). If you are interested in sharing your website's content with SCACCHoops.com, Contact Us.
Categories: Basketball, Clemson, UNC, Wake Forest