Wake Forest took care of business at home and is now 5-1. 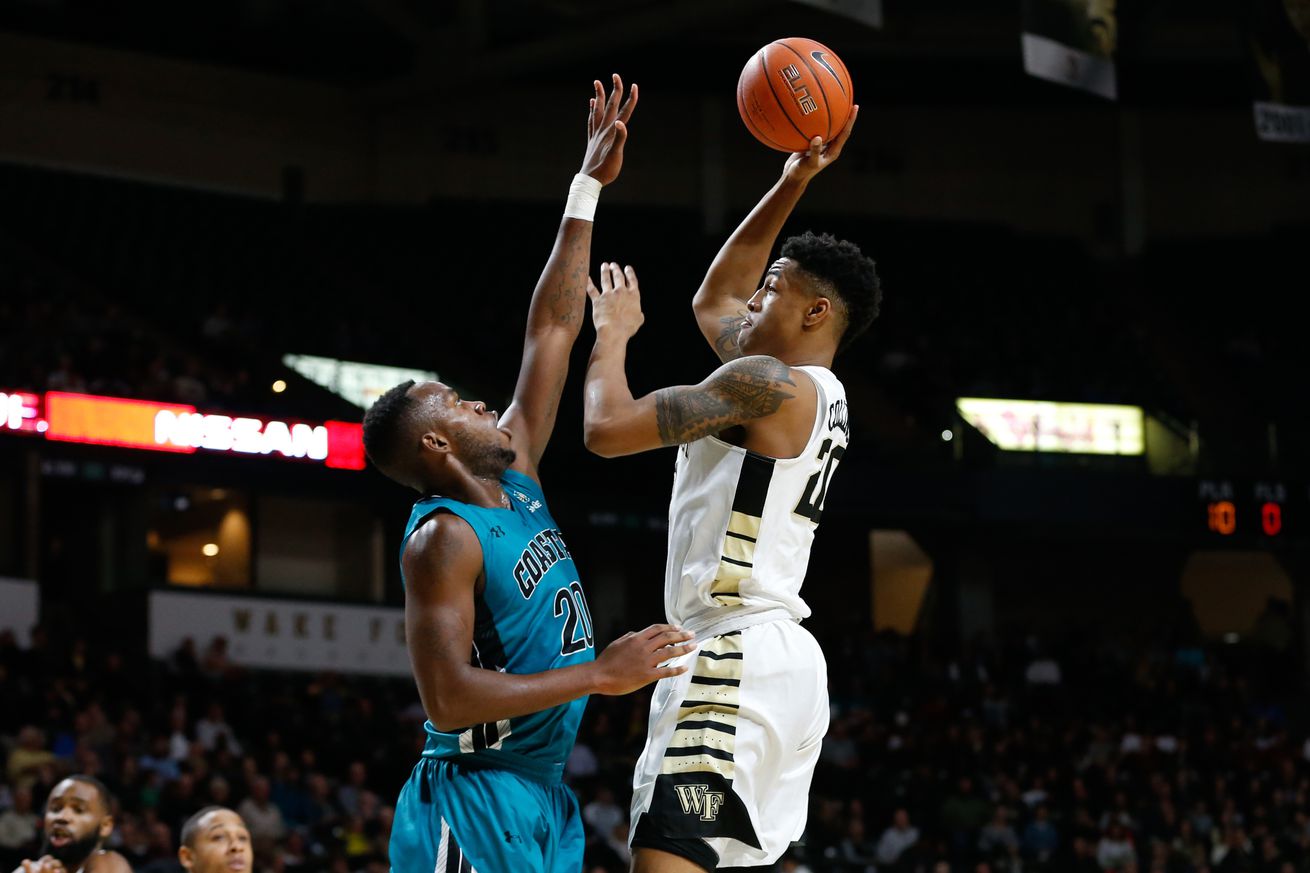 In a bizarre game on the night before Thanksgiving, the Wake Forest Demon Deacons defeated Coastal Carolina 86-74 in Winston-Salem. John Collins dropped 20 points for the Demon Deacons and continued his strong sophomore campaign. What else stood out in this contest?

Wake Forest and Coastal Carolina got off to a somewhat sluggish start, and combined for just 4 points 3 minutes into the game, but then the Deacs got going. Over the next 8 minutes the Deacs went on a 28-3 run to put Wake up 30-5. At that point I was thinking this would be a dominant performance just in time for the holiday, but of course nothing comes easy.

The Chanticleers started to make shots, and cut the halftime deficit to 14 points. I was hoping the Deacs would come out of halftime with a renewed energy, but that just couldn’t happen. Coastal Carolina had a strong to the 2nd half, and got as close as 4 points just 5 minutes into the second half. Wake Forest responded with a 7-0 run and the game was never in doubt after that.

John Collins had another sensational showing, and proved to be a beast in the low post. I never thought I’d do it, but I’m giving a post player the nickname “B Button” after his great spin moves. Collins finished with 20 points and 13 rebounds, while shooting 8 for 11 from the field. Freshman Brandon Childress had a career-high 15 points, while junior Mitchell Wilbekin dropped 14 points on just 6 field goal attempts. Overall, the Deacs has four players score in double-figures.

It’s certainly troubling that Wake Forest blew such a massive lead, but I get that it’s human nature to get complacent in that situation. Wake Forest really had an off night in terms of shooting (47% from the field) and still scored 86 points. Still, the Deacs won by double-digits and are now 5-1 on the younger season.

Coastal Carolina will host Chattanooga on Tuesday, while Wake Forest will play at Northwestern as part of the ACC-Big Ten Challenge on Monday evening. That will be an outstanding test for the Deacs and could be a critical game come March. I’m extremely excited for the game and believe it will tell us a lot about the team.

This article was originally published at http://www.BloggerSoDear.com (an SB Nation blog). If you are interested in sharing your website's content with SCACCHoops.com, Contact Us.
Categories: Wake Forest