The Orange snapped their three-game losing streak, picking up their first win of 2022 behind Buddy and Jimmy Boeheim’s 24 and 18 point performances. 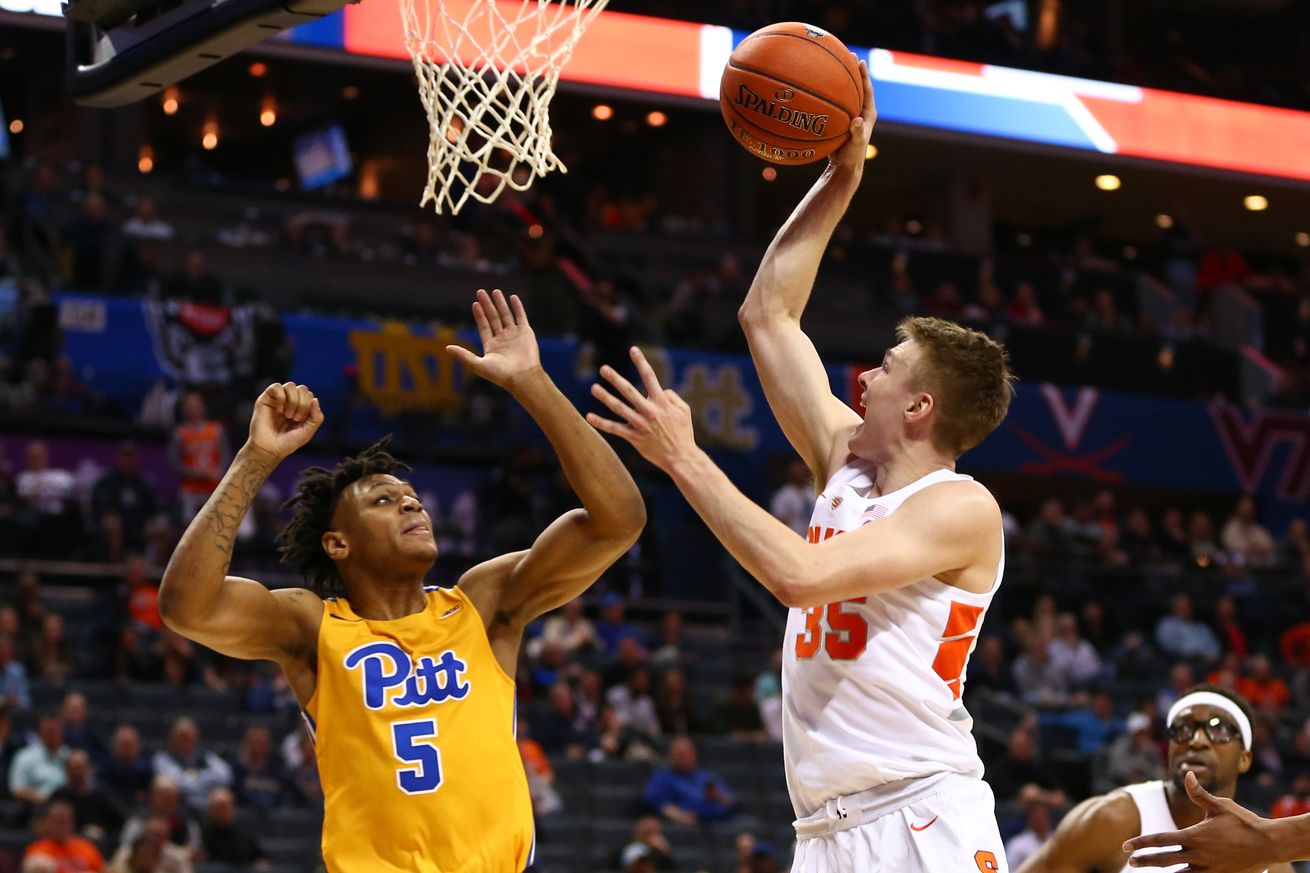 After Pittsburgh beat the Syracuse Orange men’s basketball team during the two times they faced off last season, Syracuse finally got a W back in the all-time series win column while also snapping their three-game losing streak, beating the Panthers 77-61 in the Carrier Dome.

The first half of the contest was competitive all the way through the buzzer but the Orange ran away with the game in the second half outscoring the Panthers 42-27 on 12-22 shooting as a team. While Syracuse won the game in a decisive fashion, there are still some points to be made about Orange’s performance.

Here are our three takeaways from Syracuse’s 77-61 win:

Jesse Edwards Showed He Can Play Disciplined Defense...Kind Of

Prior to tonight's game, Jesse Edwards had fouled out of the past four consecutive matchups before the final buzzer sounded. The Netherlands native is in the midst of a breakout season averaging 11.8 points, 6.3 rebounds, 0.9 assists, a steal, and 2.9 blocks in 27.7 minutes over 15 games while shooting 70% from the field.

While it's great to see the big man produce offensively at an efficient rate, coming into tonight's game, Edwards had to prove he can be efficient on the defensive side of the ball without fouling out. The first half of tonight's game provided a promising start. Edwards played 13 minutes while collecting 5 points, 1 rebound, 1 assist, 1 steal, and 1 block without committing a foul for the entire half. Edward's volume and efficiency were lower than usual tonight in the first, but that was expected while facing off against a much bigger and physical frontcourt in John Hugely and Mouhamadou Gueye.

In the first seven minutes of the second half, Edwards was all over the place making a positive impact on both ends of the floor. He played composed and disciplined defense, while making a few contested shots around the rim, converting on an and-one attempt, while also throwing down a nasty put-back dunk, off of a Buddy Boeheim missed shot attempt. However, when the Panthers began to push the pace and play more physically towards the end of the game, Edward's defensive discipline slipped away as he collected five fouls in the second half alone, fouling out of his fifth consecutive game with less than 90 seconds left in the contest. Besides that he played a strong overall game, finishing the night with 12 points, 8 rebounds, 1 assist, 3 blocks, and a steal.

The main takeaway from Edwards's performance tonight was that he can play a more composed style of defense while still creating a positive overall effect for his team. The big question heading into the future is if Edwards can continue to play composed defense consistently and not let the intensity of the game takeover his composure. The answer to this question, good or bad, will present itself in the coming games.

Pittsburgh has been one of the worst teams in the NCAA at defending and shooting the three-pointer this season. The Panthers as a team shoot 30.9% from beyond the arc while allowing their opponents to shoot 34.4% from three. In order to win upcoming games, Syracuse needs to operate on a game-to-game basis. They cannot look too far ahead in the future and dissect each of their opponent's weaknesses and exposing them. Syracuse did just that tonight.

In the first half, Syracuse shot 5-10 from three while the Panthers shot an above-average 41%. While Syracuse's perimeter defense could have been better, the Orange shot more efficiently than their opponent on two fewer shot attempts than the Panthers. The start of the second is when the Orange began to expose their opponent’s weaknesses and began to run away with the game.

In the opening five minutes of the second half, the Orange went on a 12-3 scoring run, not allowing the Panthers to make a field goal with their only points coming to form the charity stripe. Through the first ten minutes of the half, the Orange were able to hold the Panthers to 0-8 from the field and worked their way to a 15 point lead and ran away with the game from there.

The Orange ended up scoring 42 points in the second on 12-22 shooting while holding the Panthers to 27 points on 5-21 shooting. If Syracuse can continue to expose their opponent's weaknesses as they did to the Panthers tonight, fans of the Orange could be in for an exciting second half of the season.

Let's state the obvious first: this Syracuse team will only go as far as the Boeheim brothers can take them. Buddy had a career-best season last year and is scoring even more points per game this season. However, he is shooting at a less efficient rate than the season prior.

Last season, Boeheim shot 43% from the field and 38% from beyond the arc. This season, Boehiem is shooting 39.7% and 32% from the field and beyond the arc through 15 games played. When Boeheim is on, he is a matchup nightmare for any other guard in the NCAA. He opened tonight's game shooting 4-4 from three during the opening 12 minutes of the first half. While Boeheim did end up missing a three before the end of the half, he ended up scoring 14 points total leading the team in scoring and helping Syracuse to a 35-34 lead.

Boeheim continued to have the hot hand shooting the ball at the start of the second, putting up another 7 points through the first nine minutes of the half. He finished the night with 24 points, 4 rebounds, 3 assists, and 3 steals while shooting 7-13 from the field and 5-7 from beyond the arc. Jimmy, on the other hand, was as efficient as ever tonight. The fifth-year forward finished tonight with a strong overall performance totaling 18 points, 7 rebounds, 3 assists, and a steal on 6-9 shooting. Buddy and Jimmy were effective as ever and carried the Orange to their first win of 2022 and their second conference win of the season. This strong play from the Boeheim brothers needs to carry into the coming games if Syracuse plans to make a run to qualify for the post-season.

This article was originally published at http://nunesmagician.com (an SB Nation blog). If you are interested in sharing your website's content with SCACCHoops.com, Contact Us.
Categories: Basketball, Pittsburgh, Recap, Syracuse, Video