The 5 Headlines You Could Read on Selection Sunday for Wake Forest - SCACCHoops.com

There are only a few ways the season can really go from here. 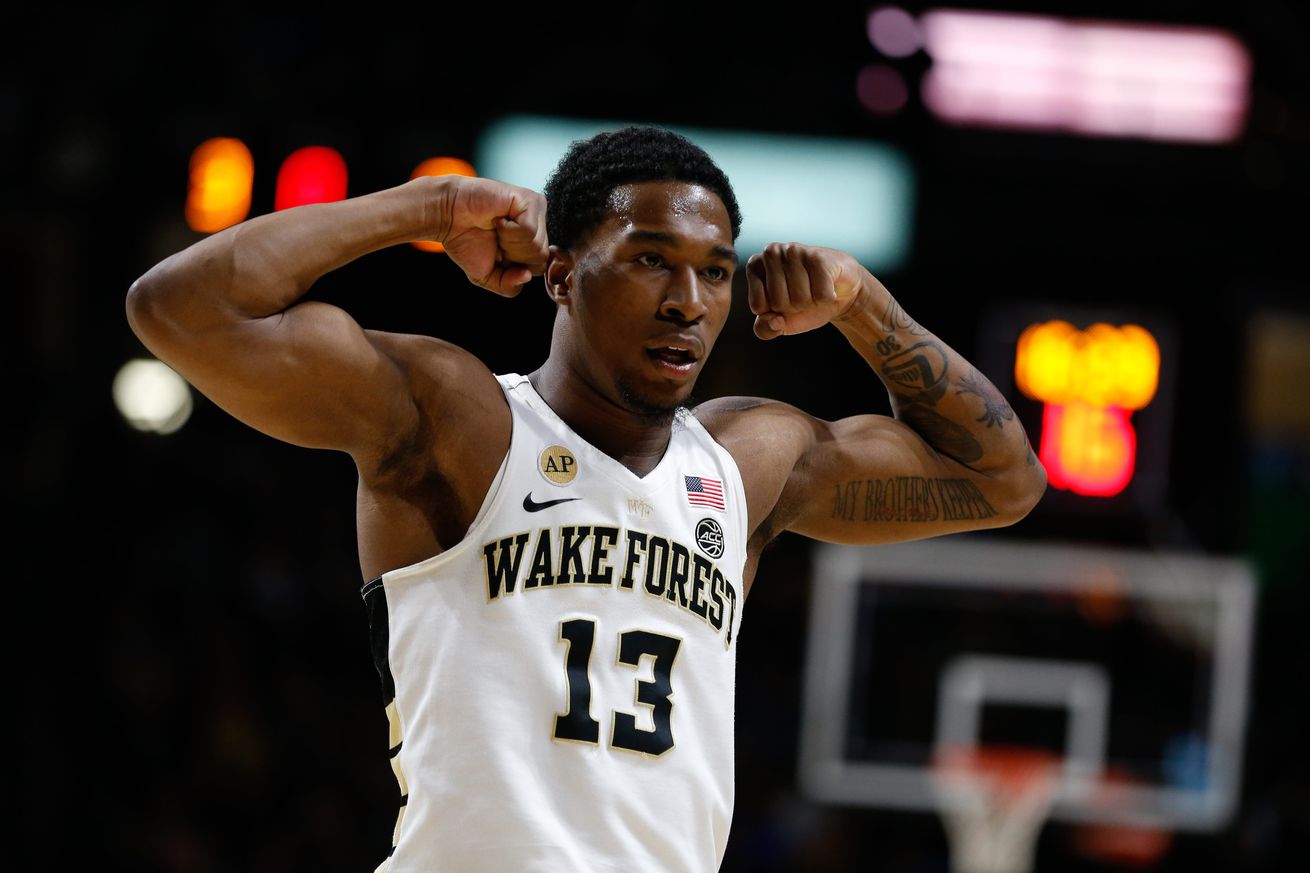 Selection Sunday is now 26 days away, and in case you haven’t heard, the Deacs are officially on “Bubble Watch.” After a fairly consistent first three months of the season, Wake now has 8+ games to prove to the NCAA Selection Committee that they are worthy of a bid to the the “Big Dance.” Given where Wake currently stands in most analysts’ bracket predictions, all signs point to a fairly stressful March 12th as we await the official reveal of the Field of 68. But if you want to save yourself the time that Sunday and read all about what’s going to happen, I’ve developed a little cheat sheet below just for you. Here are the five potential Wake Forest headlines you’ll be reading that night at 8PM as you reflect on a season that has been a roller-coaster of a year so far.

Author’s Note: I got nervous writing some of these. That’s how bad my Selection Day anxiety already is. Enjoy at your own risk.

“By the Skin of Their Teeth! Deacs Sneak into the Field of 68”

DEEP BREATHS, EVERYBODY! After six long years away from the Big Dance, the Deacs have finally earned a spot back where they belong. Wake Forest has officially received an At-Large bid to the NCAA Tournament and will face off against INSERT P5 opponent here in the “First Four” on Tuesday night. The staff, players, and fanbase had to wait until the reveal of the final region to be assured of the team’s fate, making the last five hours stressful enough to put me into whatever hospital “The Cure for Wellness” was filmed at. But I was confident the whole time, I swear. I’m not shaking; you’re shaking.

Wake back into Lunardi's Tourney field and not even last 4 in this time. In the "last 4 byes" category.

The boys in Black and Gold certainly didn’t make it easy on us. Despite taking care of business against NC State, Pittsburgh, and Clemson to close the year, Wake finished the ACC regular season without a single signature win to its resume. One final victory over fellow bubble team Virginia Tech in the ACC Tournament might’ve been just enough to push Wake over the edge, but not by much. Clearly the committee favored Wake’s high SOS, consistency throughout the regular season, and lack of bad losses heavily in their decision. I could say I’m thirsty for more at this point, but if I’m being totally honest, I am just so thrilled to be in. This is the first step of hopefully many strides forward in the Manning era. Let’s enjoy this everybody. The team, and you, have all earned it.

“Best of the Rest: Deacs Stand out Amongst ACC Bubble Teams”

The Deacs are back in the NCAA Tournament! It was a rather unorthodox way to earn a bid to the Round of 64, but I’ll take it nonetheless. After the Duke loss on January 28th, it was almost a given that Wake would have to sweep February games against NC State and Pittsburgh at the Joel in order to be considered for a bid. However, a huge come from behind win against Top 30 Notre Dame in South Bend to get back to .500 in ACC play gave them a little room for error over the next couple of weeks.

Wake, VT, Miami and GT all proj to finish 8-10 in conference. The race to get out of #ACCTuesday in Brooklyn is complicated. No one at 9-9

Dropping a game to the “Dennis Smith Show feat. Wolfpack” at Home is never fun, but at least now we know it didn’t cost us dearly. Wake earned victories in the ACC against the following bubble teams: Clemson, Miami, Notre Dame, Georgia Tech, and Virginia Tech (ACCT). Those victories and finishing 9th in the ACC clearly meant something to the committee at the end of the day. Also did you see Duke dropped to a 6 seed?? What a time to be alive!

“Back from the Dead: ACC Tourney Run Saves the Deacons’ Season”

Does that deep ACC run look clutch now or what, Wake fans? While the end of the 2017 regular season didn’t end up quite like we hoped, I think it’s safe to say the team redeemed itself over the course of Championship Week. Victories on Tuesday, Wednesday, and Thursday of the ACC Tournament brought Wake back from the “graveyard of popped bubble teams” and into relevant tournament conversation one last time before Selection Sunday.

An upset over #6 seeded Duke in the 2nd round was key, but it was the thrilling victory over #3 UVA that really propelled Wake’s tourney chances off life-support and back onto its feet. Remember when I mentioned earlier in the year that the Deacs desperately needed a signature win? I forgot to mention two in back-to-back days works even better. Many are complaining that the 11th overall team in a conference should never be considered for an At-Large bid, but the pure chaos of the 2016-17 ACC season is rewriting all of the rules. Anyone who watched Wake Forest play this season knew what this team was capable of, it was just a matter of getting hot at the right time and putting it all together. You can watch your 11th seeded Demon Deacons take on #6 Purdue Friday night on TNT. Let’s hope there’s still a little bit of magic left in ‘em for the biggest stage yet.

Thanks to John Collins' dominance, Wake Forest has a realistic chance to dance. @bgeis_bird fills you in: https://t.co/7PEGuYd8jK

“Not Welcome to the Party: Deacs NIT, not NCAA Bound”

In a day that seemed all too reminiscent of the sentiment Deacon fans have felt over and over again the last five years, Wake Forest lost a heartbreaker today. Despite finishing with an 8-10 record and more ACC wins than the previous two years combined, the Deacs ultimately didn’t do enough to catch the eye of the selection committee for 2017. It was certainly a year of sporadic emotions, oftentimes coming in unfair amounts of optimism and devastation that only desperate fans like us can become accustomed to.

Still think Wake needs a big win, with the best chance being tmrw night. Committee overvalues that stuff. High RPI alone might not cut it

While it may be my personal opinion, I keep coming back to that Home Duke loss as the beginning of the end. As we look at some of the other bubble teams that got the news they were looking for today, we can only wonder what a Top 25 win over a Blue Blood could’ve done for this resume. The selection process is often irrational, unjust, and cruel to a few teams each year. Unfortunately for 2016-17, we are one of those victims that are hurt by it most.

There are still a lot of positives from this season. John Collins has established himself as a potential All-American candidate over the next two seasons, Danny Manning brought in another solid recruiting class, and the team finally learned how to close games out on the road. Still, at a time like this, one can’t help but mumble the words “What If?” in his mind, as if the pain will go away by fantastical repetition. We still have postseason Wake Forest basketball for the first time in 6 years. Regardless of how this feels right now, that is something to cheer about. Let’s all be sure to pack the Joel, show support, and root on our Deacs to hopefully another NIT championship.

“Your ACC Champions, the Wake Forest Demon Deacons, Are In The Field. Officially”

The Deacs have known of their bid to the NCAA Tournament for the last 24 hours now, but they have just officially received the prospects of their fate. After stunning the nation with 4 straight ACC Tournament victories on the way to their first title since 1996, Wake Forest drew a 7 seed and will play Wichita State in the Round of 64 Thursday night.

We knew things were looking up after Wake took 4 out of 6 in late January/early February and upset an exhausted Notre Dame team in South Bend. They then took their next two against NC State and Clemson to record their first 5-game ACC win streak since 2005 and the rest is history. After finishing the ACC season with 9 wins out of their last 13 games, Wake continued to prove they could play with anyone in the country in Brooklyn’s first showcase of the ACC’s postseason prize.

Wake Forest has now averaged 94.5 PPG in back-to-back ACC wins against Miami and NC State. Demon Deacons are beyond dangerous on offense.

Despite having virtually locked up their At-Large bid by the time it even began, the Deacs weren’t satisfied and went on to upset #2 FSU, #6 Duke, and #1 UNC on the way to an incredible ACC Title. Wake Forest was in every single one of these games during the regular season, and this time through effective late-game shot selection and a little bit of luck found a way to end up on top in each when it truly mattered. If my 3,000 word column yesterday wasn’t enough, I’ll be Facebook Live-ing the highlights of the last 5 days over the next 72 hours. Come join me. Also if you would like to donate toilet paper to my dorm room, I’d be more than happy to accept it. My supply for the next 8 months has suddenly disappeared. #GoDeacs #6MoreWins

Which one of these headlines do you think is most likely? Will the Deacs hear good news on Selection Sunday? Comment below, and as always, Go Deacs.