Syracuse 91, Clemson 78: Orange guards lead the way for the win 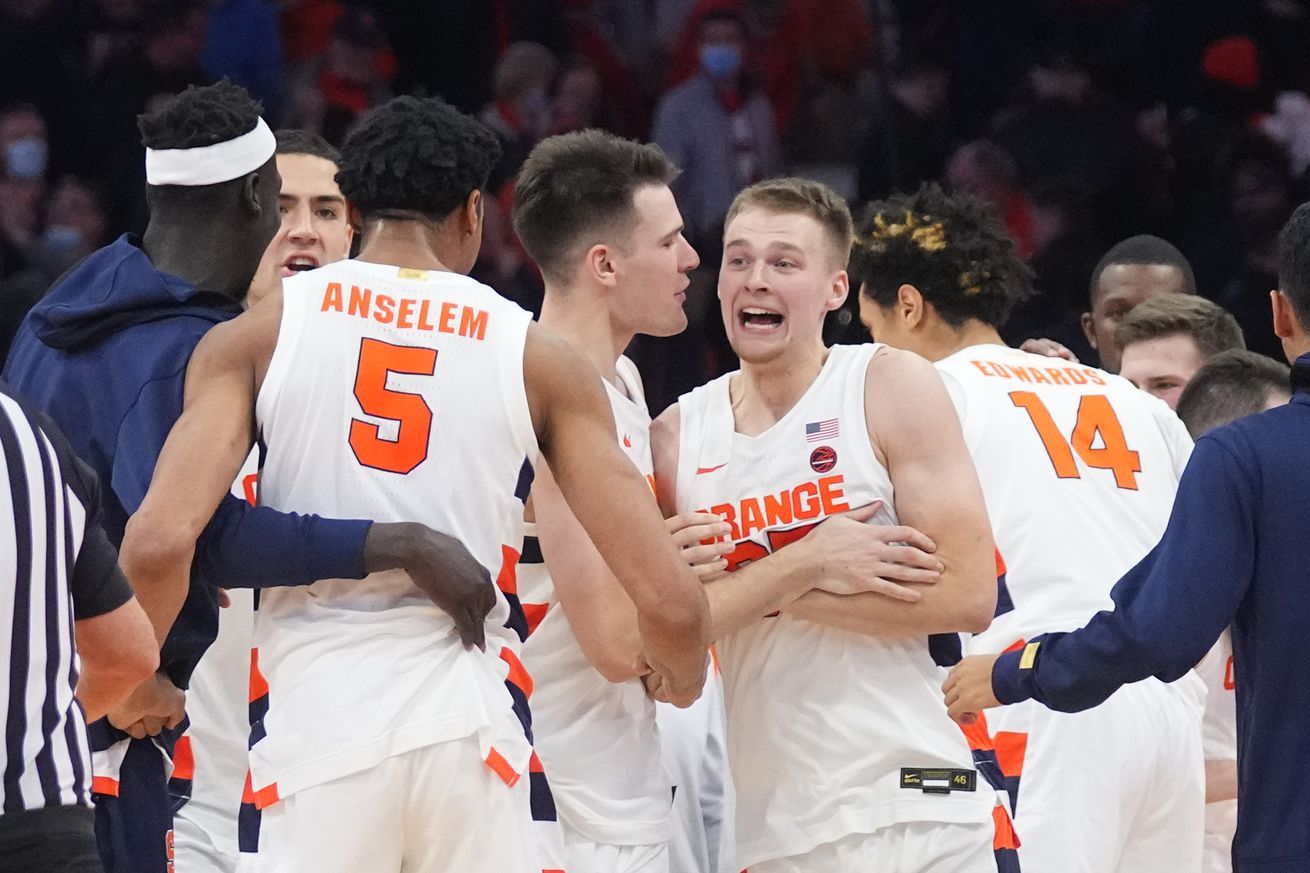 Boy, did Syracuse need that.

The Syracuse Orange picked up another much needed ACC win by defeating the Clemson Tigers 91-78 on Tuesday night. The hot shooting of the Orange guards propelled the team to victory, with Buddy Boeheim and Joe Girard scoring over 20 points each.

Early on, Clemson tried to bully Syracuse on the inside. The Tigers took a large majority of their shots at the basket. Strong defense from Jesse Edwards and a cameo from Bourama Sidibe shut down a majority of that offense. Clemson, as is tradition with its offense, held off on shots early in the shot clock and couldn’t grab offensive rebounds off misses.

The Orange opened up an early lead thanks to hot three-point shooting. Syracuse started the game 4-5 from distance and led by as much as 12. However, the turnovers started to pile up at the same time. Clemson ended the half by forcing six Orange turnovers and used the changes of possession to tie the game.

To compensate, Coach Boeheim turned to an unknown commodity - the bench. Syracuse once again utilized the three-guard lineup to have Symir Torrence as the primary ball-handler. Benny Williams got some extended time towards the end of the first half after not playing in Syracuse’s last game. The big piece was Torrence to get the ball out of Girard’s hands and lessen the turnovers.

Towards the end of the first half, the strengths of each team showed with Clemson dominating the inside and Syracuse working outside. Clemson was 12-19, or 63% from two-point range in the first half, while the Orange nailed six of its 11 three-point attempts.

Syracuse took advantage of a smaller Clemson lineup at the start of the second half to stretch out a small lead. The Tigers didn’t have their two starting bigs in PJ Hall and Hunter Tyson in the game, which allowed the Orange to take control inside on both sides of the court. Jimmy Boeheim was the big benefactor with a couple of offensive rebounds and scores under the basket.

What followed was a welcome sight to Syracuse fans. The duo of Joe Girard and Buddy Boeheim went to work. Both nailed four threes to jolt life into the Carrier Dome crowd. Girard finished with 23 points and Boeheim finished with 25 points.

To seal the game, Jesse Edwards asserted his presence on the game, even after getting postered by Hall. Edwards finished with a double-double of 15 points and 11 rebounds. That performance included four blocks and decisive presence on the inside.

Unfortunately for Syracuse, it doesn’t get easier with a trip down to Cameron Indoor to play Duke next. But any ACC win for the Orange is huge at this point, considering the start Syracuse had to the season.

This article was originally published at http://nunesmagician.com (an SB Nation blog). If you are interested in sharing your website's content with SCACCHoops.com, Contact Us.
Categories: Basketball, Clemson, Recap, Syracuse, Video