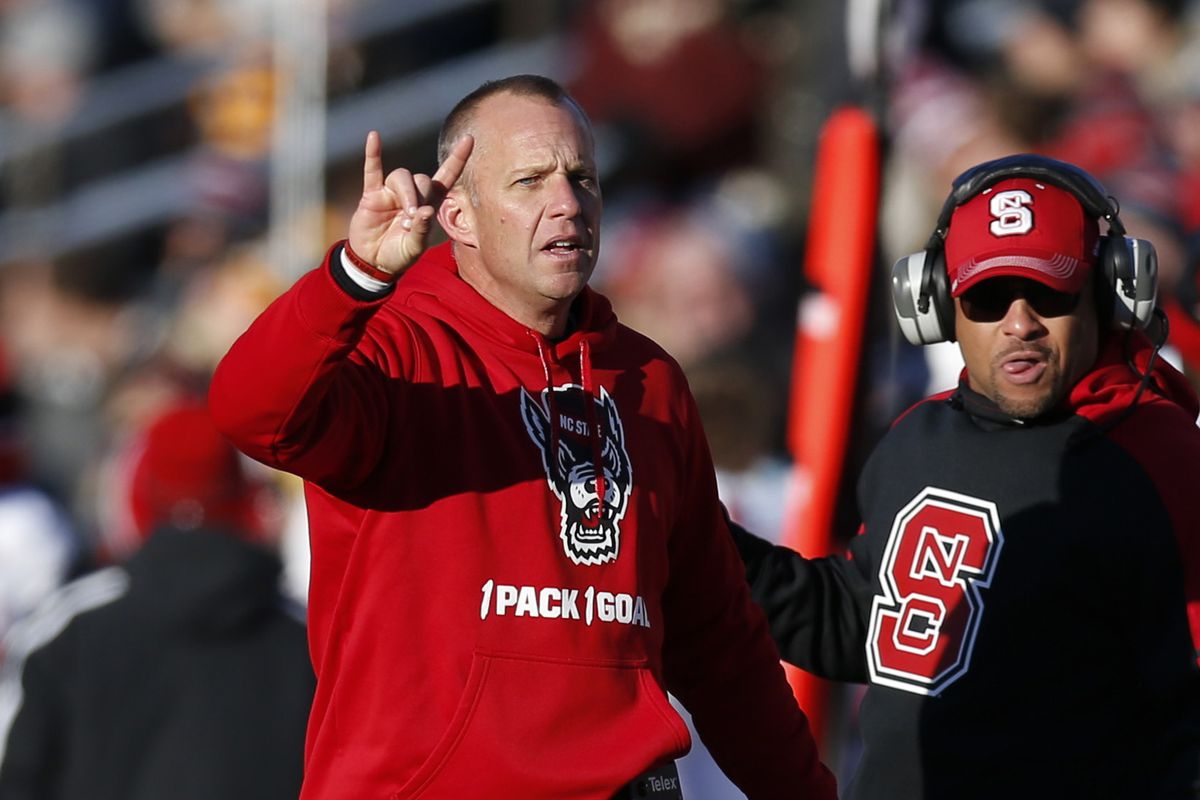 Look at Doeren’s recruiting classes. He doesn’t just look for talent. He seeks multi-sport athletes for his Wolfpack.

“I was really fortunate when I was at the University of Wisconsin to work for Brett Bielema and Barry Alvarez,” said Doeren at the ACC Kickoff media days as he enters his seventh season. “I think that program did a phenomenal job of developing players. There were three-sport athletes, tough guys. I got to watch that, to be a part of that for five years. It’s come here with me.”

Wilson, a redshirt freshman outside linebacker from Orange High in Hillsborough, is ready for preseason camp after a knee injury his senior year of high school in 2017 and a second one in July 2018. The injuries prevented him from playing last fall as a true freshman projected as a possible starter.

Besides his football talent, his multi-sport background fit the Alvarez/Bielema profile Doeren has adopted. Wilson put together one of the state of North Carolina’s most impressive three-sport high school careers that has been recorded in recent seasons.  Wilson will make an impact that will be seen at even the best sportsbook out there.

He was a 4-star football recruit, a state champion wrestler with a 43-0 record at 220 pounds and an All-Big Eight Conference lacrosse player that led his team in the gritty, down-in-the-dirt job of faceoffs. The football, wrestling and lacrosse success as a junior earned the award as the Raleigh News & Observer Male Athlete of the Year for the 2016-17 school year. Payton Wilson might have repeated, but his injury derailed plans to participate in spring football upon hurting his knee the first time.

Such honors usually got to a more mature senior. In fact, Wilson’s older brother Bryce Wilson, won the honor as an Orange football and baseball senior. He had committed to North Carolina in baseball until he was drafted and signed with the Atlanta Braves as a pitcher. Bryce has been back and forth between Atlanta and the minors since he was first called up to the big leagues in August 2018.

As for the “tough guys” persona Doeren seeks, an athlete can be a talented football player, wrestler or lacrosse player without necessarily being a tough guy. But it takes a “tough guy” to win a large-school division wrestling title in a state with North Carolina’s population.

His flip to N.C. State in December 2017 was a recruiting coup for the Wolfpack despite injuring his knee in the season’s ninth game of his senior year. He hasn’t played since Oct. 27, 2017.

“He’s healthy and he’s fully cleared — probably more excited to play in training camp than anybody on our football team,” Doeren said. “He’s in the office all the time watching tape on his own. I see him every day. He’s really, really excited to play.

“I’m excited to see him. The kid loves the game and hasn’t had it in his life. It’s something he’s missed. He’s really looking forward to this fall.”

“He’s chomping at the bit,” Doeren said. “I’m going to tell you, Payton is an incredible competitor; he hasn’t been able to play in a long time.”

Few multi-sports athletes are as dominant across the board as Wilson, but they don’t have to be to fit the Alvarez/Bielema profile. Watching them work hard at a second or third sport qualifies for Doeren’s attention.

“We have to find that in our evaluation process of recruiting,” Doeren said. “By going into the weight room to watch them, to go to their track meet, to their wrestling meet – to see the dirty stuff behind the scenes. Not just the stuff on game days that everybody sees.”

This is an age when specialization has trickled down from college to high school and now youth sports at younger and younger ages. For Doeren, focusing on one sport can eliminate a prospect from a scholarship offer consideration.

“If two guys are even, we’ll go with the guy that plays other sports,” he said.