Orange dominate Eagles in first half, cruise to 76-50 win - SCACCHoops.com

Orange dominate Eagles in first half, cruise to 76-50 win

The Orange pick up their first home conference win. 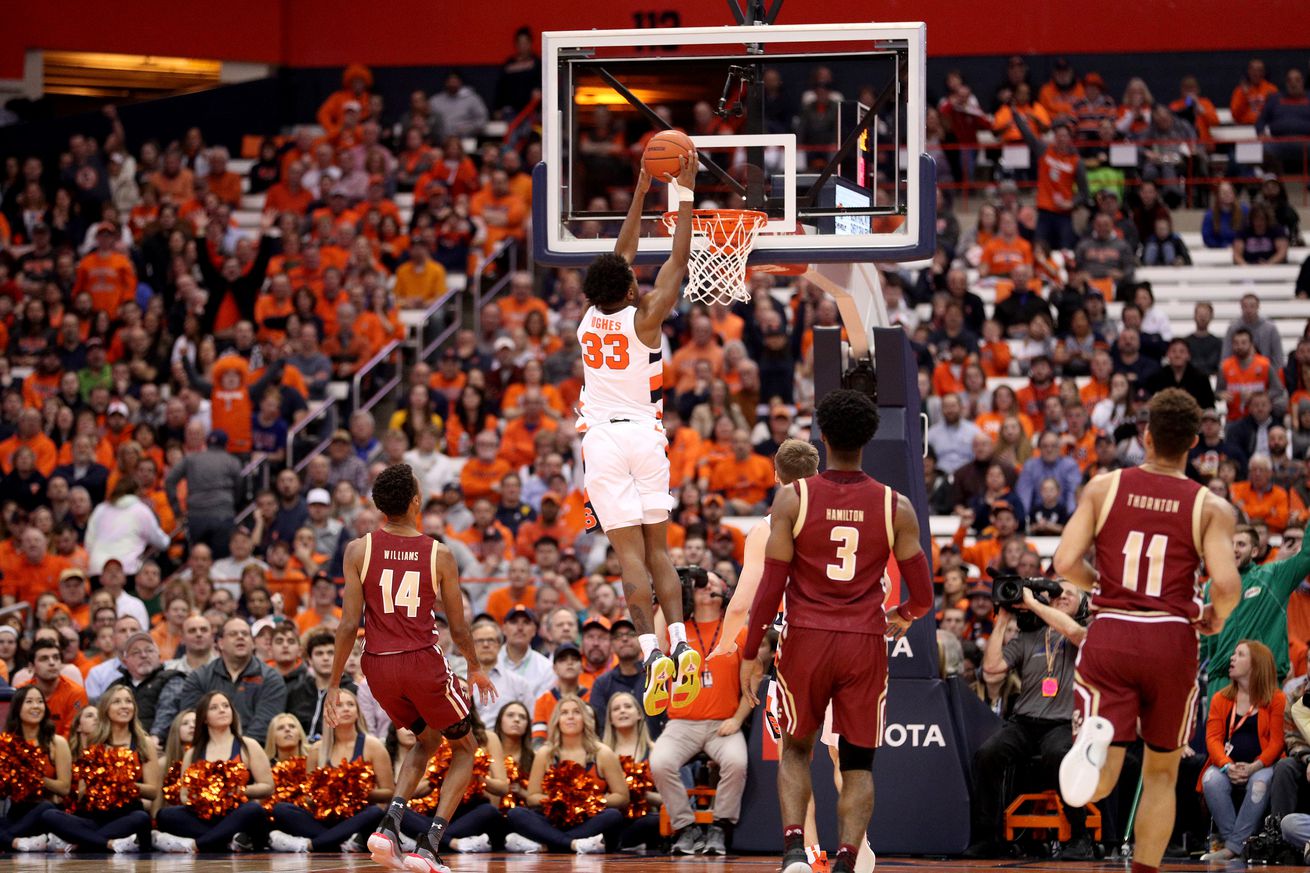 Both teams were cold in the first few minutes until Boston College opened the scoring at the 17:24 mark when CJ Felder made one of two free throws after being fouled by Elijah Hughes. Joe Girard III converted an and-one lay-in on the next possession to put the Orange up 3-1. At the first media timeout at the 15:47 mark, the score was still 3-1.

BC missed its first nine field goals of the game. During that time, Buddy Boeheim hit a three-pointer and Elijah Hughes left the game at the 13:12 mark after a bad fall on a shot attempt that was called a charging foul. He would later return, but Quincy Guerrier replaced Hughes with the Orange leading 6-1.

The Eagles’ first made field goal of the game came on a two-point jumper by Steffon Mitchell at the 12:03, making the score 6-3 in favor of Syracuse.

Hughes returned to the game with 8:15 left in the half and the Orange up 11-7. Syracuse closed the half on a 27-6 run led by Buddy Boeheim, who had 15 points in the first half, and Hughes, who scored all nine of his first-half points, including a steal and slam in transition, after re-entering the game.

The Orange shot 46.4 percent from the field in the first half while the Eagles shot just 18.5 percent (including 0-14 from three-point range). Syracuse went into the half with a 32-12 lead over Boston College.

Orange finish the half on a 27-6 run in the final eight minutes (since Hughes re-entered the game) and lead 38-13 at the half. Sorry, BC fans, but Ky Bowman isn’t walking through that tunnel. @NunesMagician pic.twitter.com/lf7dtbItem

Syracuse and BC traded buckets for the second half, with the Orange scoring 38 and the Eagles 37. Julian Rishwain hit the Eagles’ first three-pointer of the game at the 13:43 mark. BC had missed its previous 18 attempts.

For the latter part of the contest, Boston College started to pick up from three-point range, hitting four more of them. But SU had a response as well from inside and outside, and maintained its large lead.

The Orange brought ticket holders Taco Time when Brycen Goodine, clad in a headband and face mask for his broken nose, scored a lay-in and was fouled with 4:32 left in the game. He made his free throw, putting SU up 72-45. Shortly after, Jay Heath hit a two-point jumper in response, Goodine scored again on a layup, and Jairus Hamilton hit a three-pointer.

At a media timeout with 2:37 left and SU up 74-50, fans filed for the exits. The four walk-ons entered the game with 1:21 left, and SU got its first home conference win of the season.

Buddy Boeheim was the leading scorer for the Orange with 22 points. Elijah Hughes had 19.

Marek Dolezaj finished with a double-double by posting 10 points and 11 rebounds. Joe Girard scored 12 points on 3-4 shooting from distance.

The Orange travel to Blacksburg, Virginia, on Saturday for a rematch against Virginia Tech. That game tips at noon and will be available for streaming on ACCNX.

This article was originally published at http://nunesmagician.com (an SB Nation blog). If you are interested in sharing your website's content with SCACCHoops.com, Contact Us.
Categories: Basketball, Boston College, Recap, Syracuse, Video