Notre Dame notches its 12th ACC win (and 6th in a row) over Boston College, led by its upperclassmen on Senior Night 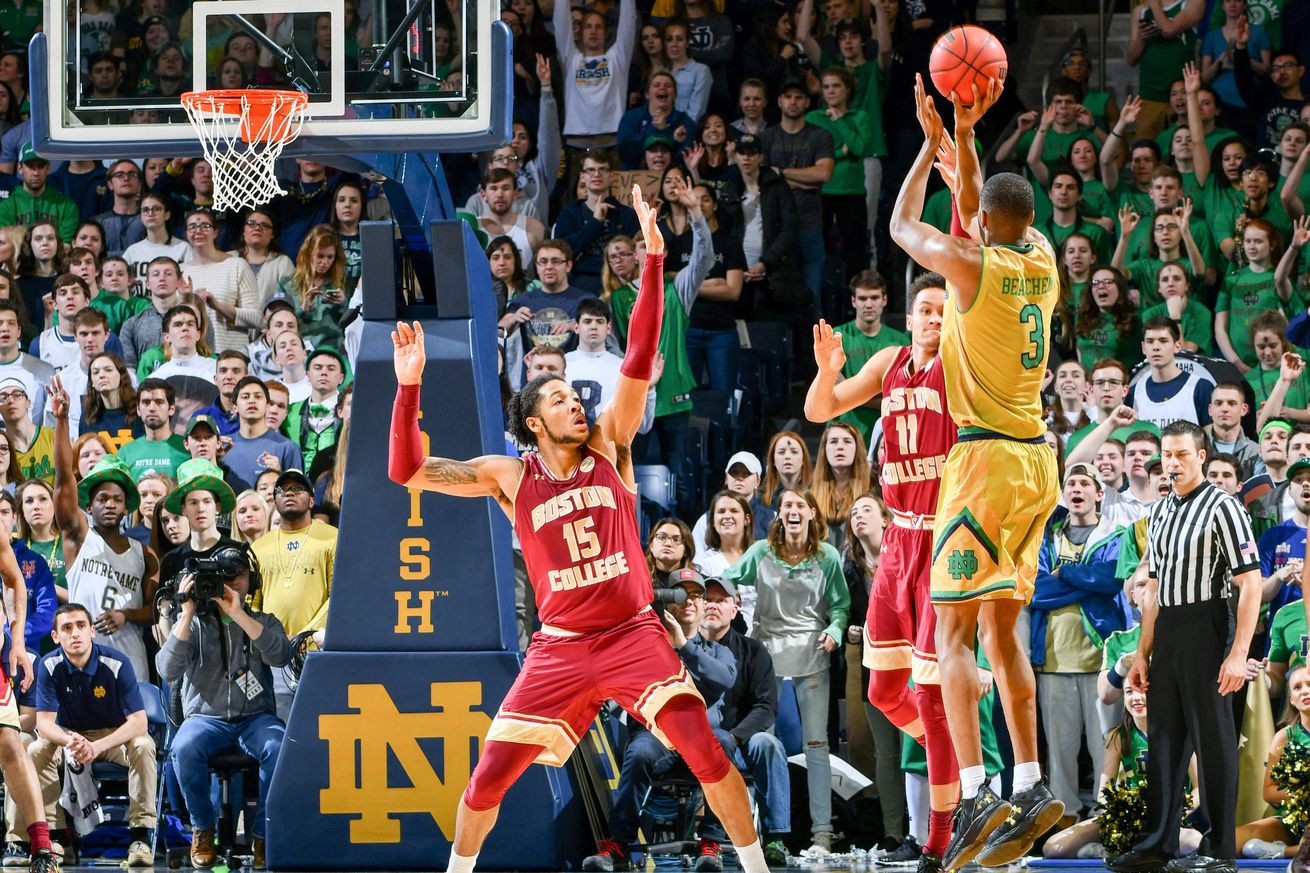 It was Senior Night this evening at Purcell Pavilion, as the Notre Dame Fighting Irish followed their senior captains (and junior captain BONZIE COLSON) to a 82 to 66 victory over Boston College.

The first 13 minutes of this game looked promising for BC coach Jim Christian’s Eagles, as Jerome Robinson, Ky Bowman, and Jordan Chatman combined to score 22 of the team’s 28 first half points, and they held an early lead over the heavily-favored Irish.

One of the only players who looked ready to compete was VJ Beachem, who scored 9 of the team’s first 23 points. Beachem, a senior and captain, decided to take the game into his own hands after Boston College took a 26-19 lead. He sparked what would become a 17-2 run for the Irish, hitting a couple three pointers and staying active on defense and the boards.

Over the last 7 minutes and 15 seconds of the 1st half, Boston College shot 1-for-9 from the field and turned the ball over 4 times. Part of this can definitely be attributed to Notre Dame’s defense picking up as they got some momentum on the offensive end, but BC definitely didn’t do themselves any favors in terms of their ball handling and shooting.

At the half, Notre Dame led 36-28, and VJ Beachem led all scorers with 15 points on 6-of-9 shooting (3-for-5 from deep). COLSON added 6 points and 6 rebounds, and the third team captain, senior Steve Vasturia, had 5 points.

For BC, Jerome Robinson led the way with 9 points, and Ky Bowman added 6, noticeably less effective than his last game against ND, in which he scored 29.

Mike Brey called a timeout, and the Irish proceeded to go on a 15-5 run to take a 63-47 advantage. From there, Notre Dame steadily buried BC, with the Eagles’ deficit never shrinking below 13 points and the Irish lead reaching 20 at one point.

Graduate student walk-on Patrick Mazza was able to get into the last minute or so of the game as well, joining Vasturia and Beachem in playing their final home games in Irish uniforms. With the crowd going bananas, Mazza was able to get a thunderous dunk, a rebound, and an awesome blocked shot out of nowhere on an unsuspecting Eagles shooter.

By the end, the Irish had defeated Boston College by 16 points. VJ Beachem led the way for Notre Dame with 22 points, while BONZIE COLSON added 18 and 11 (another ho-hum double-double) and Steve “White Steve” Vasturia had 10 points, 5 rebounds, and 3 assists.

For the Eagles, Ky Bowman was the high scorer with 19, and AJ Turner, Mo Jeffers, and Jerome Robinson combined to chip in 34. Boston College shot 42% from the field and 41% from long range on the evening.

This article was originally published at http://OneFootDown.com (an SB Nation blog). If you are interested in sharing your website's content with SCACCHoops.com, Contact Us.
Categories: Boston College, Clemson, Louisville, Notre Dame