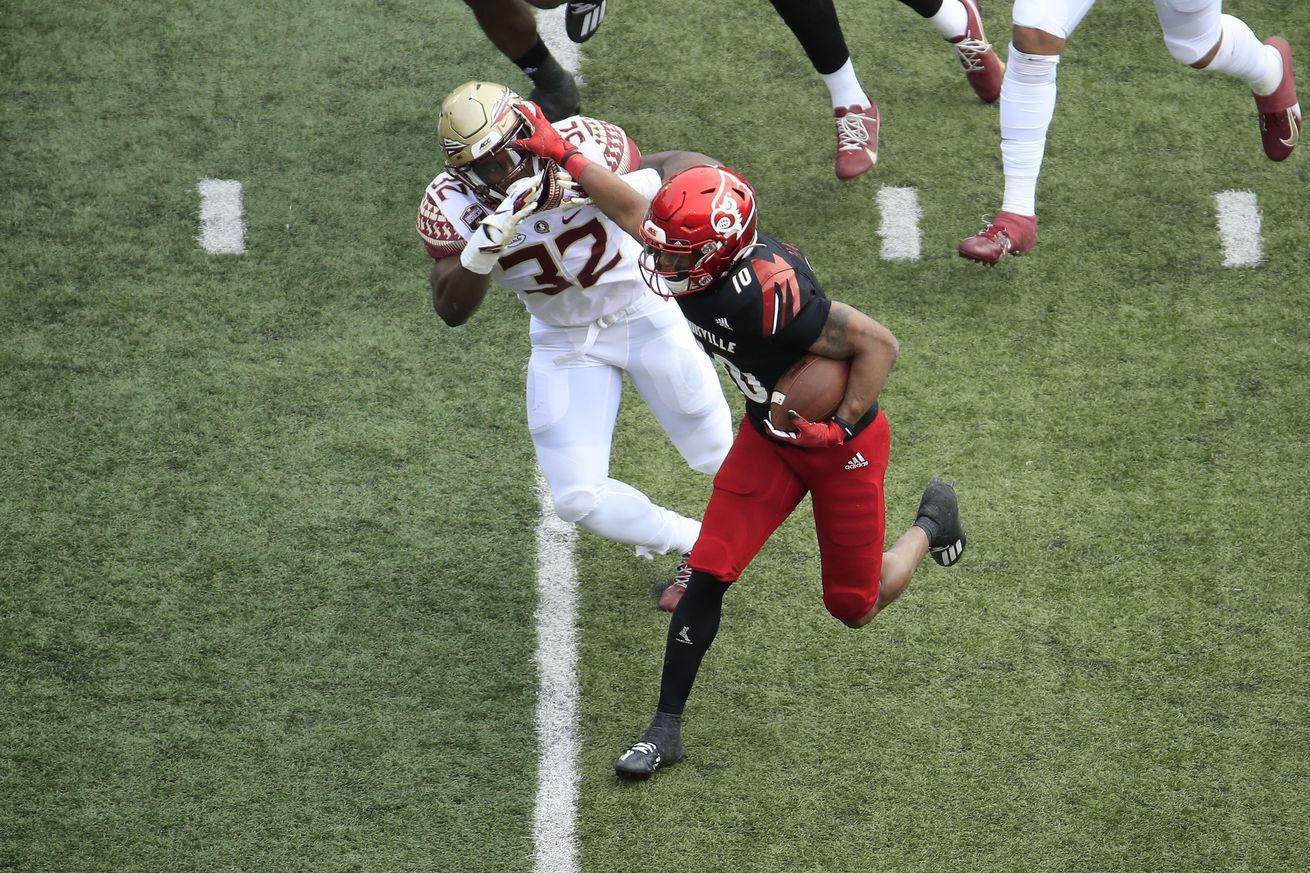 I mean what a refreshing game. This was the all-around performance we had all been waiting for and was exactly the kind of team we expected to see this season.

The offense was dynamic. The defense was stout. And the play calling was outstanding on both sides of the ball. It was everything that you could have asked for and a whole lot more.

And for an effort like this to come in as much of a must-win situation against an opponent where there has been a lot of bad blood on and off the field these last few years (see: entire crowd booing Chubba Purdy), was just about as good as it gets, and everyone deserves to celebrate.

The game got off to the start we all feared with former UofL QB Jordan Travis marching down the field, converting on multiple third downs, and then dribbling the ball off the ground and scrambling for a TD.

HOW DID HE DO THIS?

It looked like we were in for a long day once again, but then Louisville answered quickly with a four-play touchdown drive thanks in large part to a 66-yard reception from Tutu Atwell.

The defense looked solid from the beginning of the game with players always in position and near the ball, but for whatever reason they couldn’t wrap up and finish tackles at early on. Luckily, those issues quickly got cleared up and the defense was outstanding for the rest of the game.

On the offensive side of the ball they were on fire. Javian Hawkins was ridiculous as he ran for 174 yards, three touchdowns, and averaged 10.9 (!) yards per carry. Stupid.

The play calling was great too. For as much as we had complained about the predictability of the offense, and with very few exceptions, the calls were diverse, clever, and took advantage of FSU in every single way. Heading into the game we knew FSU wasn’t great defending in the flats, and the way Satterfield and Co. exposed the defense with play action sweeps, quick screens, and counter plays was exactly what we had been hoping to see from this offense and a whole lot more.

Hawkins is back. Malik is back. Tutu is back. Ford is back. Pfeifer is back. The O-line is back (only one sack surrendered). The whole damn thing is back, and it was a ton of fun. And that’s not to mention we got to see Puma play and redshirt senior Maurice Burkley have a hell of an afternoon.

It cannot be emphasized enough how well this defense has played the last two weeks. They finally got an interception. They were suffocating. They held Chubba to 0-9 passing *wink*.

Chubby Purdy sets a UofL opponent record for most passes in a game without a completion, going 0-9.

And they forced Jordan Travis into some really uncomfortable passing situations that flustered him all day long and he finished 14-32 for just 141 yards and an INT.

There were so many great individual plays on defense (I love you so much, Monty), but the credit goes to the whole unit as they performed tremendously from top to bottom. The defense shined brightest when they had a huge goal line stand when the game was still hanging in the balance. And even when the offense followed that up with a safety, the defense answered with their second interception of the season that all but put the game away.

Genuinely forgot how much better things feel after a win.

With a dominant win like this you can’t help but feel good about where the team is heading into next week against Virginia Tech and the back half of the schedule. Lots to be excited about and we’ll get into it a whole lot more next week. But for now enjoy the hell out of the rest of your weekend. No need to #FearTheSpear. Let’s get ready for the Hokies on Halloween.

This article was originally published at http://www.CardChronicle.com (an SB Nation blog). If you are interested in sharing your website's content with SCACCHoops.com, Contact Us.
Categories: Florida State, Football, Louisville, Recap, Video, Virginia Tech