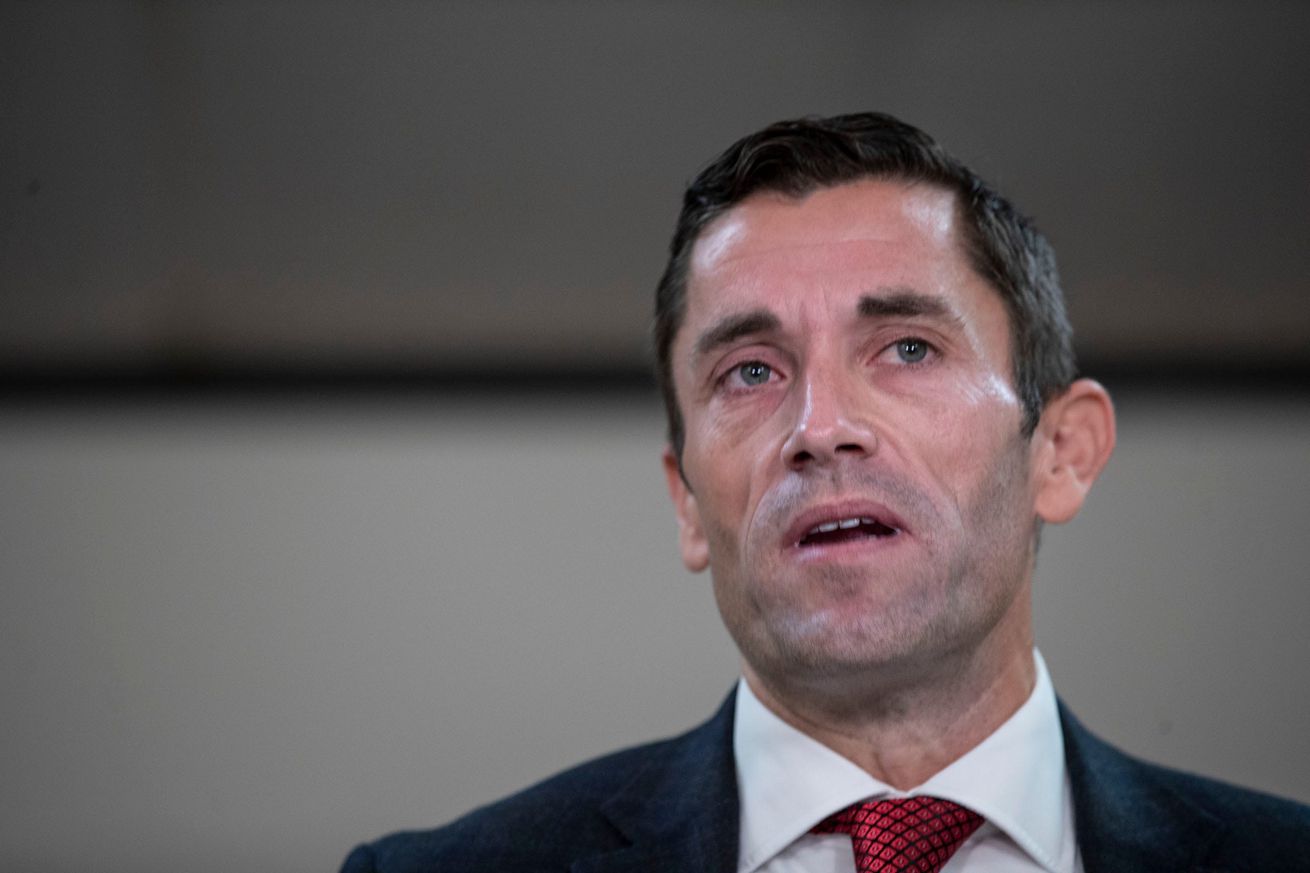 It’s official. A new era of Cardinal athletics is upon us.

Here’s the release from U of L:

The University of Louisville turned to a familiar face to take the helm of the Cardinals’ athletic programs. Interim President Lori Stewart Gonzalez announced that Josh Heird, who has served as interim AD for almost six months, was hired today as vice president for intercollegiate athletics and athletic director.

The UofL Athletic Association endorsed the hiring at its meeting Friday morning. The appointment is immediate, although contract terms have not been finalized.

“Josh is our athletics director because he represents who we are today—and who we aspire to be,” Gonzalez said. “He has a vision of the limitlessness of U of L athletics. He has built relationships with student-athletes, coaches, staff, donors, alumni and fans. He has demonstrated time and again that not only is he ready to lead our program—he is ready to elevate it.”

“Today is a great day for the University of Louisville, with the official appointment of Josh Heird as permanent athletic director,” said Kentucky Gov. Andy Beshear. “Josh has proven to be a strong leader who will not only champion the school, but also the incredible student athletes. I believe there are very bright days ahead for UofL athletics, and Josh will be a stable, guiding force through this exciting time.”

“It is impossible for me to put into words the emotion that accompanies this announcement,” Heird said. “The opportunity to lead one of the premier athletic departments in the country means the world to me. Between having an MBA from this institution and being fortunate enough to spend 13 years working for this university, I am extremely aware of the responsibility and expectations that come with this appointment. I will work tirelessly to provide our world-class coaches, staff, and student-athletes with the resources essential to achieve their academic and athletic dreams.

“The Louisville Cardinals are the common thread that connects this entire community - it has been and will continue to be my goal to make this university and this city proud of this program,” he added. “I am grateful to Dr. Lori Gonzalez and others who provided input in this importance decision. Lastly, from the bottom of my heart, I want to thank my family and especially my wife Abbey, for their support through my entire career.”

In his six months serving as interim athletic director, Heird hired UofL’s popular new men’s basketball coach, Kenny Payne; established an NIL department within athletics; addressed educational payments for student-athletes beginning this fall; and worked with UofL staff to plan for an operating budget for the 2022-23 year that exceeds a record $114 million.

Heird has more than 13 years experience in athletics administration at UofL and at Villanova University.

He worked at UofL from 2007 to 2016, including four years as assistant athletic director for championships and facilities. In that role, he helped design and oversee construction of the Jim Patterson Baseball Stadium expansion, the Ulmer Softball Stadium expansion, the building of the Dr. Mark and Cindy Lynn Soccer Stadium, the lacrosse stadium press box, as well as the Thorntons Academic Center of Excellence. He also assisted with the day-to-day management of facility operations. Heird was responsible for management of all ACC and NCAA postseason events hosted by UofL, including the 2015 and 2012 men’s and women’s cross country national championships, the 2015 and 2012 men’s basketball second and third rounds, the 2014 women’s basketball regional, the 2012 women’s volleyball national championship and the 2012 field hockey national championship.

He then served as senior associate athletics director/chief athletics operating officer at Villanova in 2018-19 after operating nearly two years as associate athletic director for internal operations and finance. In those roles, he provided leadership for all internal units of the athletic department and had administrative oversight with finance and budget, capital projects, ticket and equipment operation, food service, camps and overall project and event management. He also was the sport administrator for the men’s lacrosse and men’s soccer programs, as well as the secondary administrator for men’s basketball. Villanova won the national championship in basketball in 2018.

“Josh has done a tremendous job leading the University of Louisville which is evident with today’s announcement that he will permanently lead the Cardinals as its Athletic Director. He has already made significant contributions during his time around the ACC AD table and we know that will only continue. To be certain, Lori Gonzalez and the search committee made an outstanding hire. Congratulations to Josh, Abbey and their entire family.”

“I am thrilled for Josh Heird and the entire Louisville Cardinals family. Josh will be an outstanding director of athletics at Louisville, as he has prepared well for the opportunity and gained the trust of his colleagues at UofL, the ACC and nationally. Josh is the right fit to provide steady and visionary leadership during this dynamic time of change in college athletics. All of us in NCAA Championships have great respect for Josh and wish him heartfelt congratulations and best wishes for success.”

“Josh is the perfect fit at the perfect time to lead Louisville Athletics. From the day I met him, it was clear being a Cardinal was near and dear to his heart but yet he dedicated himself to Villanova Athletics in a way that brought us unprecedented success on multiple fronts. He will forever be appreciated on our campus for his bright mind and egoless work ethic. We wish him and Abbey nothing but the best.”

“Josh is one of the brightest, hardest working, visionary administrators I’ve ever worked with. He was a huge part of our basketball and academic success. Patty and I think the world of Josh and Abbey, and we all look forward to them building the future of U of L Athletics.”

“Today is a great day for UofL. I am thrilled and honored to serve our athletic department under Josh Heird. He has proven to be strongly committed to UofL Athletics and to our student-athletes. I look forward to the near future of our department.”

“I was thrilled to hear that Josh Heird is going to be our permanent leader. Josh has invaluable experience both at Louisville and within the college athletics community; but more than that, he is a person of high character who is dedicated to making this community, university, and athletic department great.”

“I am happy for Josh and happy for the athletics department. Everyone involved with Cardinal athletics from fans to boosters, etc. are going to find out how good Josh is. A no nonsense, just get the job done type of guy which I respect a lot.”

“I am very excited that Josh will continue to be our leader. His commitment and passion for the University of Louisville to be elite on and off the playing field makes him the best choice to lead the athletic department and win with integrity for years to come.”

“This is a great day for Cardinal Nation. Josh Heird is an excellent choice to lead the Cardinals. He has more than proven his ability to step up and lead our department in both the best and worst of times. I am excited to be able to keep working with him as I have the utmost confidence that his decision-making process always prioritizes our student-athletes. His common-sense leadership style and no-nonsense approach to athletics is a product of him working his way up through the ranks in athletics both here and at Villanova.”

“Josh Heird is an excellent administrator with experience at all levels of collegiate athletics. He has his finger on the pulse of our athletic department, university, and community. His ability to develop and continue authentic, honest, and straightforward relationships will move our department forward within the ACC and NCAA landscape.”

“I am so happy to have Josh Heird as our permanent athletic director. He has been with the university for a long time and I am confident in his ability to lead us to new heights.”

“I have known Josh for a very long time, and he is absolutely the right person for the job. He loves the University of Louisville and has positioned himself to be a tremendous Athletic Director at this institution. He has worked tirelessly to grow and develop in athletics, and he is absolutely prepared to be our Leader. He is a man of great character, intentionality, and humility and I am excited to call him my boss.”

“Josh, for me exemplifies exactly the type of person we need leading our athletic department. He was here, left for a few years, then recently came back, all while gaining valuable insight for running a successful athletic department. He has seen both the highs and lows of Louisville Athletics and is 100 percent ready to lead us into a new era. I know his work ethic is unmatched, and his character is incredibly strong. I am thrilled to be on his team.”

“Josh has done an exceptional job as interim AD and deserves the permanent position. I have always felt Josh has the best intentions for all programs here and I’m looking forward to many great years together.”

“I have seen firsthand the tireless work that Josh has done for this Athletic Department. His love for the city of Louisville and this University is clear. It’s now time for this fan base to come together and get back to what makes this athletic program so special.”

“I’m so happy that Josh will get the opportunity to lead this athletic department going forward. He is a man of high character and cares deeply for all the programs here at the university. He is so deserving of this opportunity and the future is bright under his leadership.”

“I am really enthused for Josh. Josh is driven, energetic, and is exactly what we need and want to lead this athletic department. Josh has always been straight forward with me and never just told me what I wanted to hear. From the beginning, he has supported our football program with the resources needed to help us achieve our goal of winning an ACC Championship. I think Josh is a rising star in college athletics and will do great things for the University of Louisville.”

I am ecstatic for Josh, Abbey and their family. Josh has earned this amazing opportunity to lead our UofL athletic department into the ever-changing environment that we are a part of. I look forward to working with him as we continue to make Louisville one of the best universities to be associated with.

“I am very excited about Josh’s promotion to full-time Athletic Director and think it is a phenomenal hire. While serving as the interim director, he has upheld the values of our athletic department and has a clear vision of our future. He is a first-class quality guy with the right values and there is no doubt in my mind that he is the only person for this job.”

“I’m excited for Josh and he has earned this opportunity. Josh is an experienced administrator who began his career at Louisville and furthered his experience at Villanova working with Jay Wright, one of the best coaches in the men’s game. I’ve been extremely impressed how Josh has navigated this department and made some difficult decisions over the last six months. I have been impressed with how he’s handled himself and never wavered for his commitment to our student-athletes and this athletic department. I am looking forward to having Josh leading this department for years to come.”

This article was originally published at http://www.CardChronicle.com (an SB Nation blog). If you are interested in sharing your website's content with SCACCHoops.com, Contact Us.
Categories: Basketball, Football, Louisville