The Fighting Irish fall at the buzzer to the Georgia Tech Yellow Jackets, 62-60 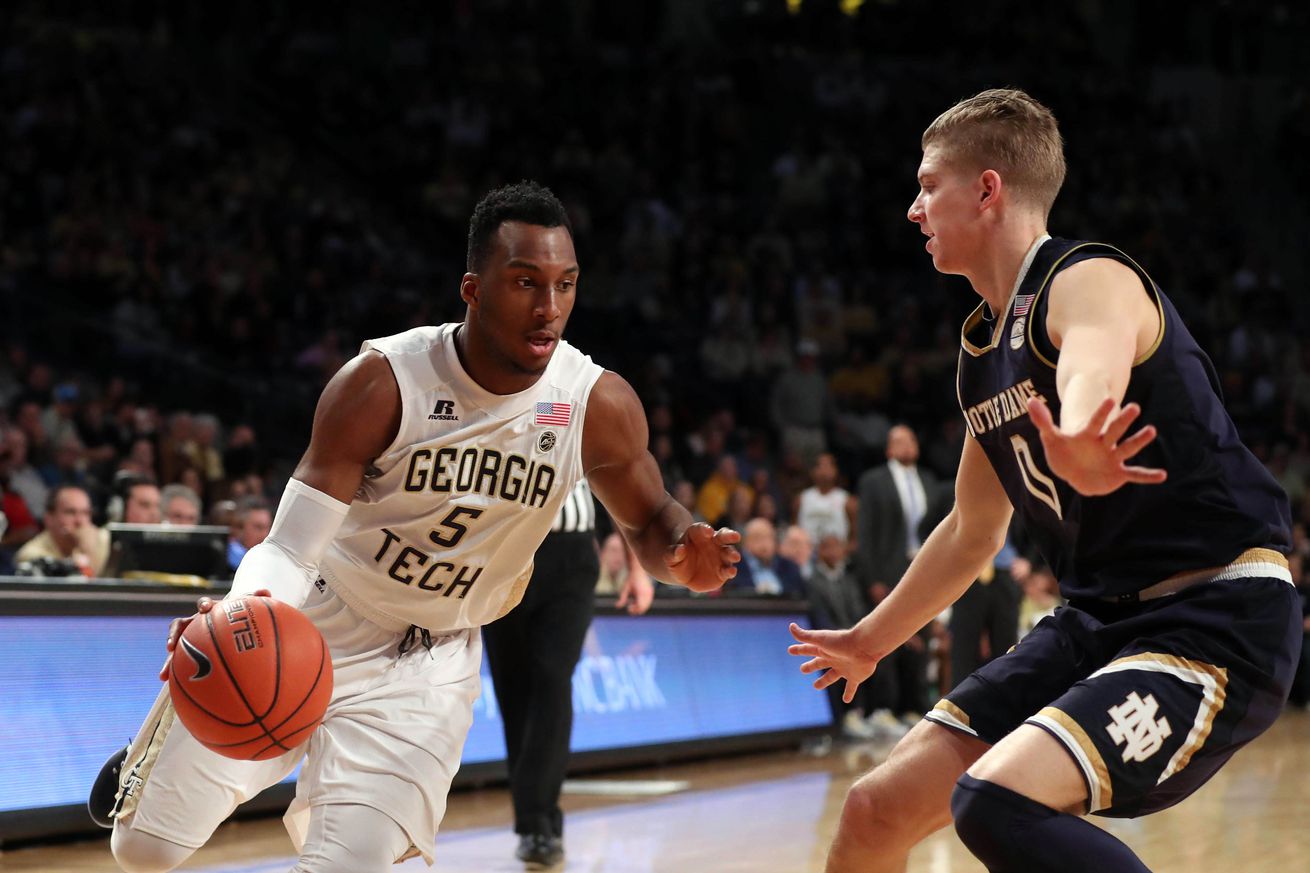 The #14 Irish dropped their second game in a row and their second road game of the season, losing on a buzzer-beating layup to the Georgia Tech Yellow Jackets, who improve to 13-8 and 5-4 in ACC play. ND moves to 17-5 and 6-3 in ACC play.

Early on, it looked like Notre Dame was the far superior team and would control the game, as the Irish zoomed out to a 19-9 lead in the first ten minutes. However, Georgia Tech turned it on defensively and began to burn the undersized Irish on the glass (the Yellow Jackets out-rebounded ND 21-10 in the first half), going on a 13-4 run to make it 23-22 before a VJ Beachem layup got the Irish back up by 3.

However, the Yellow Jackets would not let the momentum they’d built die, going on a 13-6 run to end the half. Those 6 points for ND came in the last two minutes by way of a couple big three pointers, first from Beachem and then from Matt Farrell with just seconds remaining.

Before Beachem’s 3 with 1:41 left, Notre Dame went on a 4-minute, 26-second scoring drought that saw the Yellow Jackets score 9 straight points. At the half, Georgia Tech guard Tadric Jackson led all scorers with 14 points, while center Ben Lammers had 9 points and 8 rebounds. For ND, Beachem led the way with 12 points (putting him over the career 1,000 point mark) and Farrell had 8.

In the second half, the Fighting Irish came strong out of the gate, taking a 40-38 lead while on a 12-3 run continued from the end of the 1st half. Tech responded in kind, though, going on a 10-2 run fueled by 6 points from Lammers, who the Irish had no answer for, as he drained a jumper to make it 48-42 with less than 12 minutes to go.

After a timeout, VJ Beachem hit another huge 3-pointer to stop the bleeding and make it 48-45. From there, the teams more or less traded buckets, and at the under-8 media timeout, Georgia Tech held a 56-53 lead.

As Tech extended its lead to 60-55 and threatened to pull ahead by more after a stop with less than 4 minutes to play, a Matt Farrell steal and three pointer brought the Irish back to within 2 points at the under-4 timeout. Beachem would then tie it with a jumper at the 2:38 mark.

After multiple missed shots by both teams, Georgia Tech called a timeout with 48 seconds remaining and the game still tied at 60. Out of the timeout, Tech’s Josh Okogie drew a shooting foul, but missed both shots, giving the Irish the ball with just a 4-second difference between the shot and game clocks.

Farrell dribbled at the top of the key until about 9 seconds remained in the game, but missed a running jumper with a little too much time left on the clock. The Yellow Jackets corralled the rebound and pushed it up the floor to Okogie, who redeemed himself by laying it in as time expired, knocking off the Irish and giving the Yellow Jackets their third win over a top-25 team at home this season.

Georgia Tech’s Tadric Jackson finished with a game-high (and his career high) 25 points and Ben Lammers added 15 and 10, while Okogie had 8, including the crucial last two points for the win. For the Irish, BONZIE COLSON had 13 points and 13 rebounds for his 13th double-double of the season, but was not on the floor down the stretch. VJ Beachem scored 23 points to lead the team, and Matt Farrell chipped in 15.

The Yellow Jackets destroyed Notre Dame on the glass, out-rebounding them 37 to 29 and snatching up 12 offensive rebounds. Furthermore, Irish fans saw their nation-leading free throw shooting team once again perform poorly at the charity stripe, following up a 65% performance against Virginia with a 64% performance at Georgia Tech.

Georgia Tech will travel to Clemson on Wednesday looking to continue their hot play, while Notre Dame heads home for a quick turnaround as they host the 17th-ranked Duke Blue Devils on Monday night.

This article was originally published at http://OneFootDown.com (an SB Nation blog). If you are interested in sharing your website's content with SCACCHoops.com, Contact Us.
Categories: Basketball, Clemson, Duke, Georgia Tech, Notre Dame, Virginia