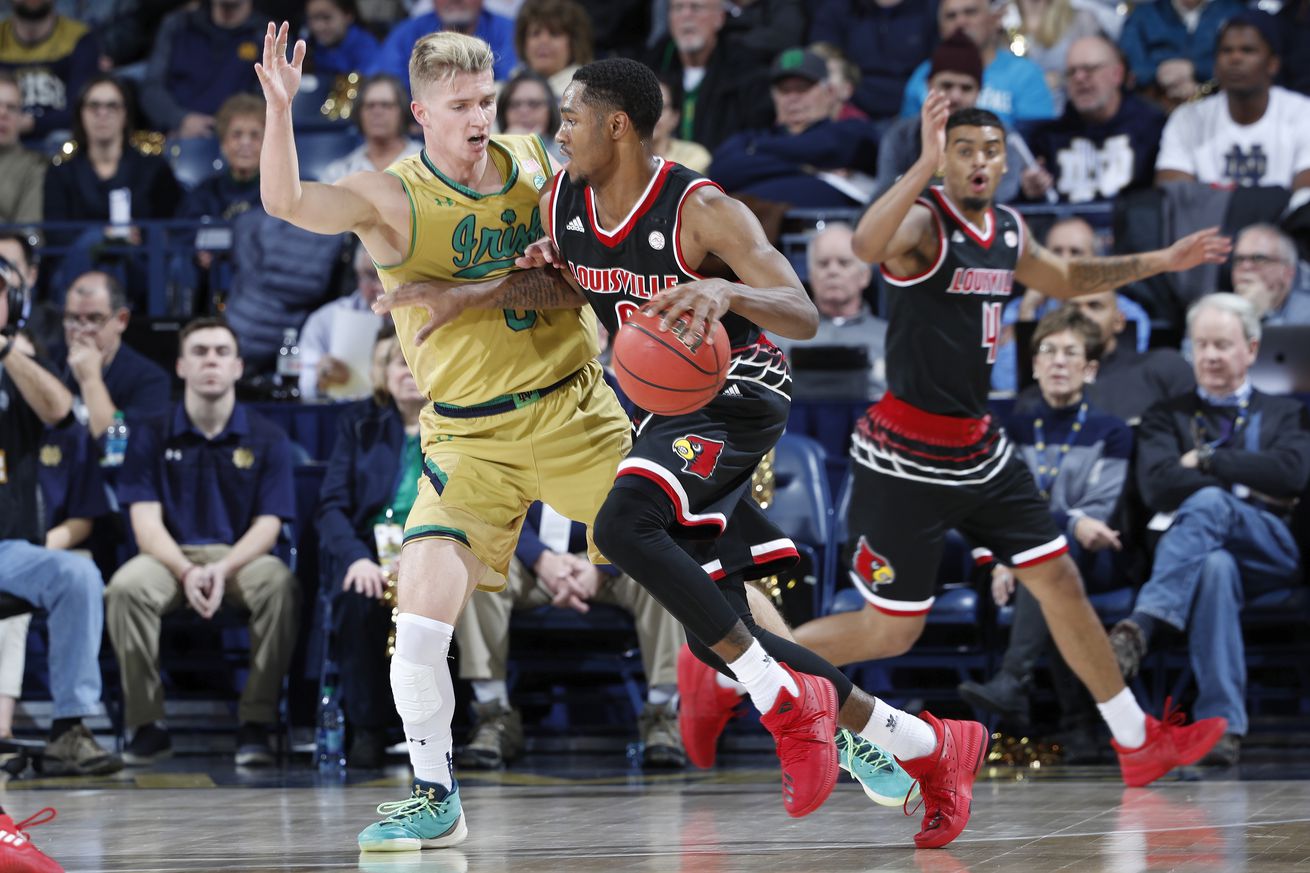 Partly because of injuries and partly because of youth, Notre Dame is in the midst of perhaps the worst season in Mike Brey’s 19 years as the program’s head coach. The Fighting Irish are 13-15 overall, have lost four straight, and are just 3-12 in conference play. Their lone ACC victories have come against Boston College (twice) and Georgia Tech.

Despite the disappointing campaign, the Fighting Irish have been competitive against some of the best teams in the conference in recent weeks. They’ve been beaten by double digits just once in the month of February, and we’re tied or within one possession in the final minutes of recent games against Virginia, Florida State and Virginia Tech.

Due to a season-ending injury to senior star Rex Pflueger and the unexpected early season transfer of Elijah Burns, Brey has been saddled with a young team and a short bench. The team that will enter the Yum Center on Sunday won’t resemble the Fighting Irish squads Louisville fans are used to seeing, the ones loaded with talent and experience, and a deep enough bench to push pace and get into shootouts if need be. Instead, they’ll see a Notre Dame team that plays at one of the slowest tempos in the country, and is heavily reliant on three freshmen, a sophomore and a grad transfer.

Despite all the adversity, Notre Dame still has one of the most productive players in the conference in junior forward John Mooney. The team’s leading scorer at 14.0 ppg, Mooney also leads all major Division-I conference players in rebounds per game in league action at 12.1 rpg. He’s on pace to become the third Fighting Irish player in the past four seasons to lead the ACC in rebounding in all games. Mooney has scored in double figures in all bu four of Notre Dame’s games this season, and he leads the ACC in double-doubles with 17. No other player has more than 11.

Gibbs has actually seen his scoring average dip slightly this season from 15.3 ppg as a sophomore to 13.7 ppg presently. The explanation for that is two-fold. First, he’s being asked to do much more of the ballhandling and facilitating this season than in years past. And second, when Pflueger went down, the assignment of guarding pretty much every opponent’s leading scorer fell on his shoulders. He’s scored 17 points or more in four of Notre Dame’s last five games, and had 12 in the game against Louisville a year ago.

Harvey has also seen his role expand this season. He’s playing eight more minutes a night than he did as a freshman, and as a result has seen his scoring go from 5.8 ppg last season to 11.0 ppg at the moment. That freshman season of Harvey’s was cut short by microfracture surgery, something he’s still working to come all the way back from. He’s a super talented offensive player who should thrive in the coming years when Notre Dame looks more like its usual self.

Another cause for optimism for the future if you’re a Fighting Irish fan is the presence of one of the most highly-touted freshman classes in program history. Leading the way is starting guard Prentiss Hubb, who is playing the fourth-most minutes of any major conference freshman in the country. The Maryland native — who missed his entire senior season of high school ball because of an ACL tear — has been at his best in conference play, scoring in double figures seven times. Included in that group is a 17-point performance in Notre Dame’s most recent game, a 68-61 loss to Florida State.

Though so much is different about Notre Dame this season, two things remain the same: The Irish take care of the ball as well as just about anyone (No. 8 in D-I in turnover percentage), and avoid fouling better than anyone (best in the country in opponent free-throws per field goals attempted). They’re never going to beat themselves.

Outside of that, the Irish are a shell of the Jerian Grant, Demetrius Jackson, Pat Connaughton, Luke Harangody, Ben Hansbrough teams of the past. They want to slow things down and play a halfcourt game, and they really struggle with shooting the ball. They also rank in the bottom five of the conference in both offensive and defensive rebounding percentage.

—Before and after Sunday’s game, Louisville will honor its three graduate transfers as it celebrates Senior Day. As always, fans are encouraged to wear red.

—Louisville has won 15 of its last 17 Senior Day games.

—Just two points separate the Louisville-Notre Dame series since the Irish and Cardinals became conference opponents in 2005-06. Louisville leads the series 10-8 over that span, but Notre Dame leads in points scored: 1,350 to 1,348.

—Nine of the last 20 games between Louisville and Notre Dame have gone into at least one overtime, including last season’s double OT win by the Cardinals in South Bend.

—From 1994 through 2013 Notre Dame and Louisville met 13 times and seven of those contests went to overtime. Louisville won four of those seven contests, but the Irish claimed three of the last four, including the epic 104-101 five overtime victory in Purcell Pavilion on Feb. 8, 2013.

—Louisville’s five overtime loss at Notre Dame in 2013 is the only game in program history the Cardinals have lost when scoring at least 100 points. It was also the last loss for U of L’s 2012-13 national championship team.

—Christen Cunningham leads the ACC in assists in conference only games (6.4). He has handed out 87 assists in his last 13 games.

—Notre Dame is committing just 14.0 personal fouls per game - the second-lowest average in the country behind Loyola Chicago (13.8) and ahead of Siena (14.1).

—Notre Dame is shooting .760 from the free-throw line, good for 21st in the country, sixth among major conference teams, and second in the ACC.

—Louisville’s Jordan Nwora is the second-most improved scorer in the nation with his 17.1 scoring average (sixth in the ACC) up 10.4 ppg from his 5.7 average last year.

—Notre Dame’s John Mooney leads the ACC in double-doubles with 17. No other player has more than 11.

—Louisville is one of just four schools which have won 20 or more games on the court in each of the last 16 seasons (also Kansas, Duke and Gonzaga). The Cards need two wins to extend that streak to 17.

This article was originally published at http://www.CardChronicle.com (an SB Nation blog). If you are interested in sharing your website's content with SCACCHoops.com, Contact Us.
Categories: Basketball, Louisville, Notre Dame, Preview