Orange embarrassed at Carrier Dome in final game of the year. 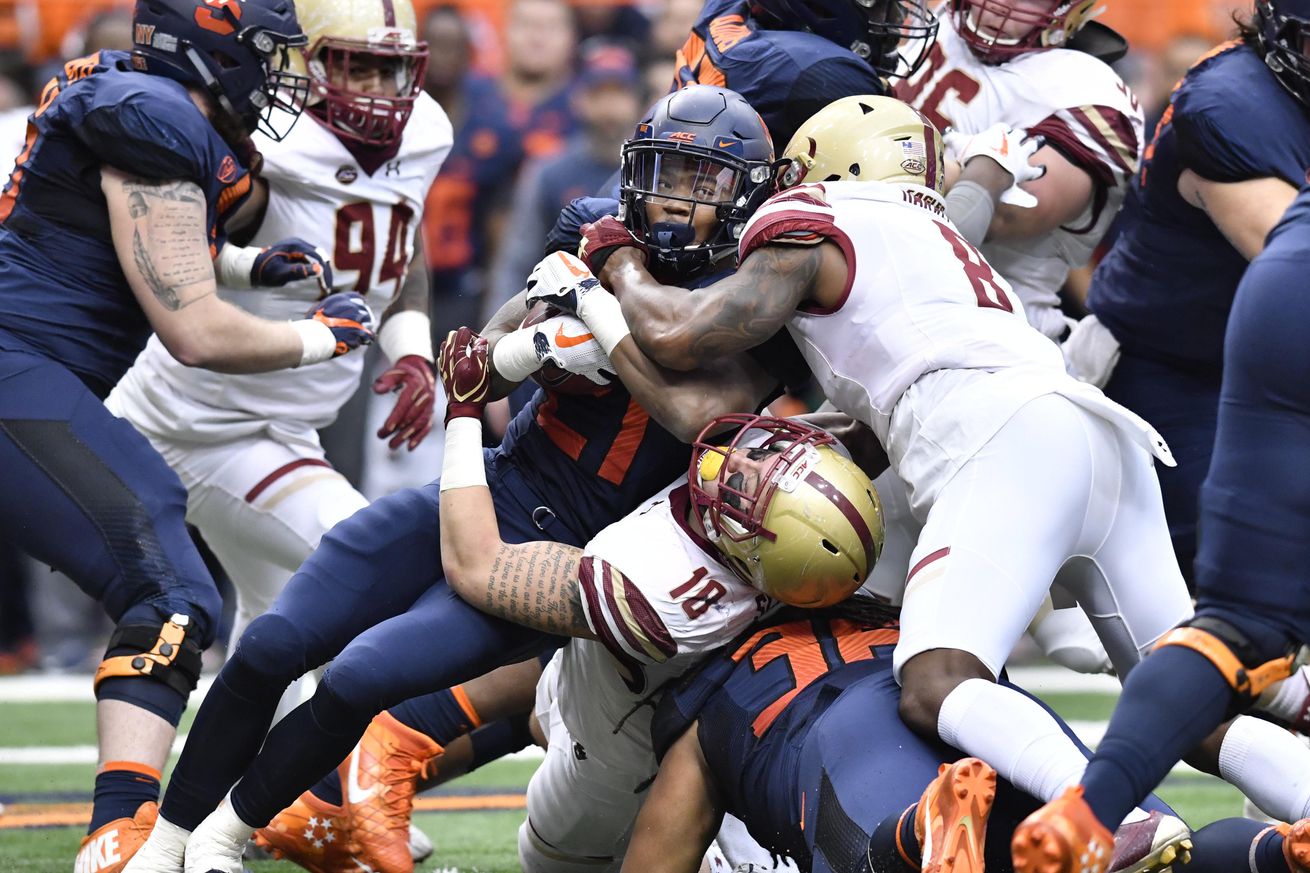 The Syracuse Orange were already in a tailspin this season, as you knew. But we probably weren’t prepped for the Boston College Eagles running right through us on Saturday.

Unfortunately, that’s exactly what happened when BC beat Syracuse, 42-14 on Senior Day.

We knew that Boston College had a quality rushing attack, and it delivered and then some. The Eagles accumulated well over 300 yards on the ground, led by AJ Dillon, who had nearly 200 on his own, plus three touchdowns. Jon Hilliman also topped 70 yards on his own.

But the real problem was how well the Orange defense allowed Darius Wade to throw the ball. The Eagles backup quarterback completed over 70 percent of his passes for 248 yards. In fact, six different Boston College players had at least two receptions on the game. BC scored first and while Syracuse had ample opportunities to test them the rest of the game, the offense couldn’t keep drives going and the defense was unable to stop the Eagles’ pretty basic offensive attack.

For a stretch in the first half, it looked like the Orange could make a game of it. Rex Culpepper had 280 passing yards and two touchdowns through the air. And Moe Neal ran very effectively for nearly 90 yards. Steve Ishmael and Ervin Philips also combined for 19 catches to pad their career leads in that category for Syracuse. Ishmael also topped the career yardage mark once held by Marvin Harrison. The senior set a career high in receiving yards with 187 on the day.

SU also turned the ball over three times, which won’t help anyone win a game.

We’ll be left with an offseason of “what if” here for Syracuse. Following the Clemson game, two strong efforts vs. Miami and Florida State both resulted in losses. Then the injury to Eric Dungey and the defensive collapse came at the exact same time to seal the deal on another 4-8 season. It’s not a “lost year,” necessarily. But the poor performance over the course of the final three games certainly won’t leave a great taste in our mouths.

More season recap conversation to come over the next week or so. It’s officially basketball season now.

This article was originally published at http://nunesmagician.com (an SB Nation blog). If you are interested in sharing your website's content with SCACCHoops.com, Contact Us.
Categories: Boston College, Football, Syracuse