Duke dressing up Cameron Indoor Stadium without the Crazies - SCACCHoops.com

Duke dressing up Cameron Indoor Stadium without the Crazies

Michigan State basketball coach Tom Izzo encourages his players to soak up the atmosphere when the Spartans face Duke at venerable Cameron Indoor Stadium, including interacting with students camped out for tickets at Krzyzewskiville. 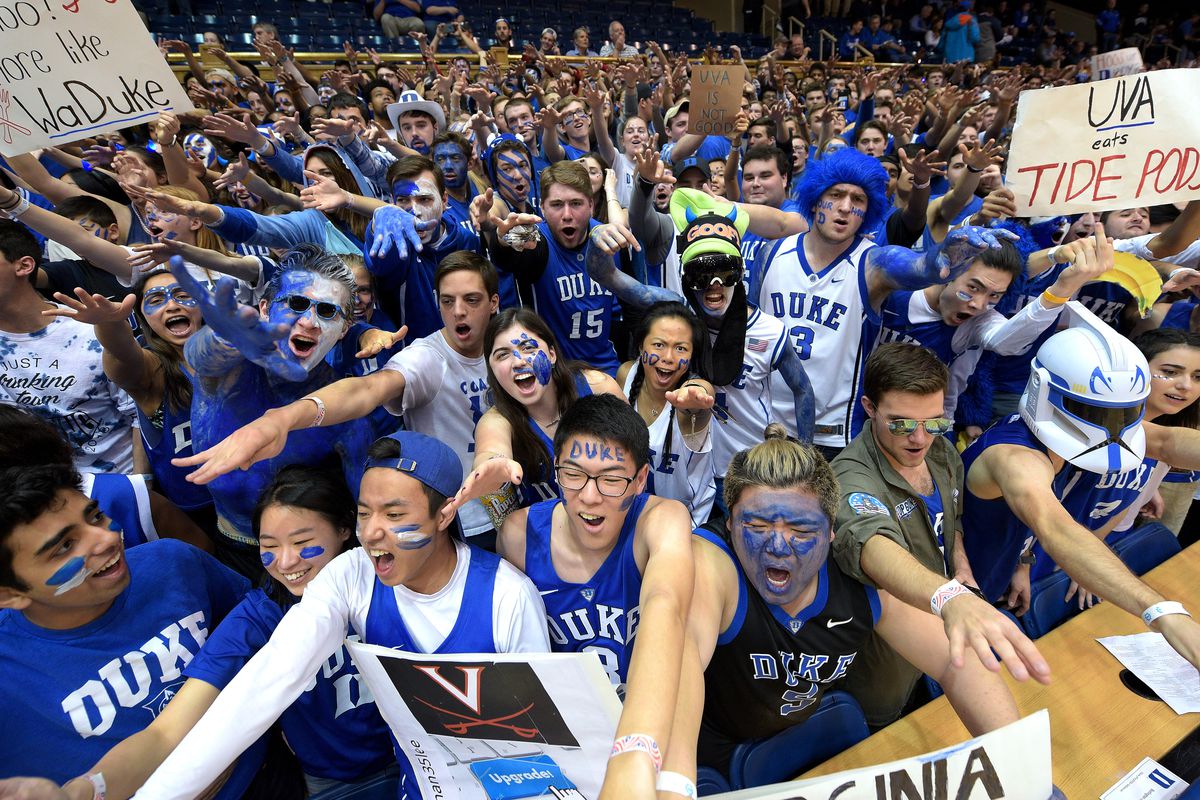 But the sights and sounds will be more like a preseason scrimmage in a high school gym when preseason No. 13-ranked Michigan State faces the No. 9 Blue Devils Dec. 1 at Cameron. Krzyzewskiville is ghost town with no fans of any ilk permitted to attend games this season due to the COVID-19 pandemic.

The Spartans last visited Duke on Nov. 29, 2016. Only fifth-year senior Josh Langford, who is returning from foot surgeries that have sidelined him the past season and a half, was on the 2016-17 roster.

He won’t recognize the place.

Instead of cardboard cutouts in the stands, Duke is using graphics to turn a tarp with photographic images representing the student section to form essentially a mural of the “Cameron Crazies.” Which photos representing crazed future doctors, lawyers, executives and government leaders remains to be seen.

The covering will span the bleachers reserved for the student section on the side opposite from the team benches. A similar photo tarp with the band depicted will be placed in its normal spot behind a basket.

“I think the main people in Cameron are the Cameron Crazies and the band,” Duke coach Mike Krzyzewski said when he met with the media Thursday in an ACC coaches conference call. “And so, they’ve created some really nice things to honor those people. People can have cutouts. We decided not to have them. We just decided to do it and kind of a big scheme in honor of the Cameron Crazies. And I think that’s a good idea.”

Duke’s Grayson Allen drives on Josh Langford.
Duke is expected to pipe in crowd noise according to guidelines that the NCAA has established.

“I’m starting my 41st year here,” Krzyzewski said. “So, I’ve benefited greatly from having that sixth man to create one of the best environments in sport, not just in basketball, and not having that will mean, well, we’ll see. You know, after we play a couple games, I’ll let you know how good or how bad it is.”

Although Duke is an impressive sight on TV when packed with its current capacity of 9,291 fans, when Cameron is empty the floor level seating with short rows of bleachers looks more like an old high school gym. The balcony seats encircling the arena, with cramped, uncomfortable seats, provides its aura.

In Michigan State’s 2016 visit to Cameron, the then-unranked Spartans lost to No. 5 Duke, 79-68 to. Langford, playing 22 minutes off the bench in the eighth game of his college career, scored seven points with 3-of-6 from the field, including 1-of-3 three-point field goals. Eron Harris was Michigan State’s leading scorer with 14 points; Miles Bridges scored 11. None of the Duke players on the 2020-21 roster played in the game.

In all, Izzo’s Spartans have only beaten Krzyzewski’s Blue Devils two of 14 times. Both victories were in the NCAA Tournament en route to a Final Four berth. Michigan State beat Duke in the 2005 Sweet Sixteen and the 2019 Elite Eight.

However, in last year’s Dec. 3, 2019 ACC/Big Ten Challenge, No. 11 Michigan State responded with its most disappointing performance of the season. The 87-75 loss to the No. 10 Blue Devils at the Breslin Center wasn’t as close as the final score. Returning Duke players with double-digit performances were Joey Baker with 11 and Matthew Hurt 10.

Johnson was named to the preseason All-ACC first team and Moore the second team. He and Roach are 5-star recruits. Two other 5-star recruits in the freshmen class of six are center Mark Williams (7-0, 225) and combo guard D.J. Steward (6-2, 165).

Duke was picked second behind Virginia in the ACC race. Michigan State plays at Virginia on Dec 9 in the ACC/Big Ten Challenge.

Michigan State’s projected starters include the return to the court of Langford (6-5, 200) and redshirt junior Joey Hauser (6-9, 220), who sat out last year as a transfer from Marquette.

Duke opens the season with two home games against Gardner Webb Nov. 25 and Coppin State Nov. 28 before facing the Spartans. Michigan State has two home games Nov. 25 against Eastern Michigan and Nov. 28 against Notre Dame before traveling to Durham, N.C.