I don’t want to talk about this one again. 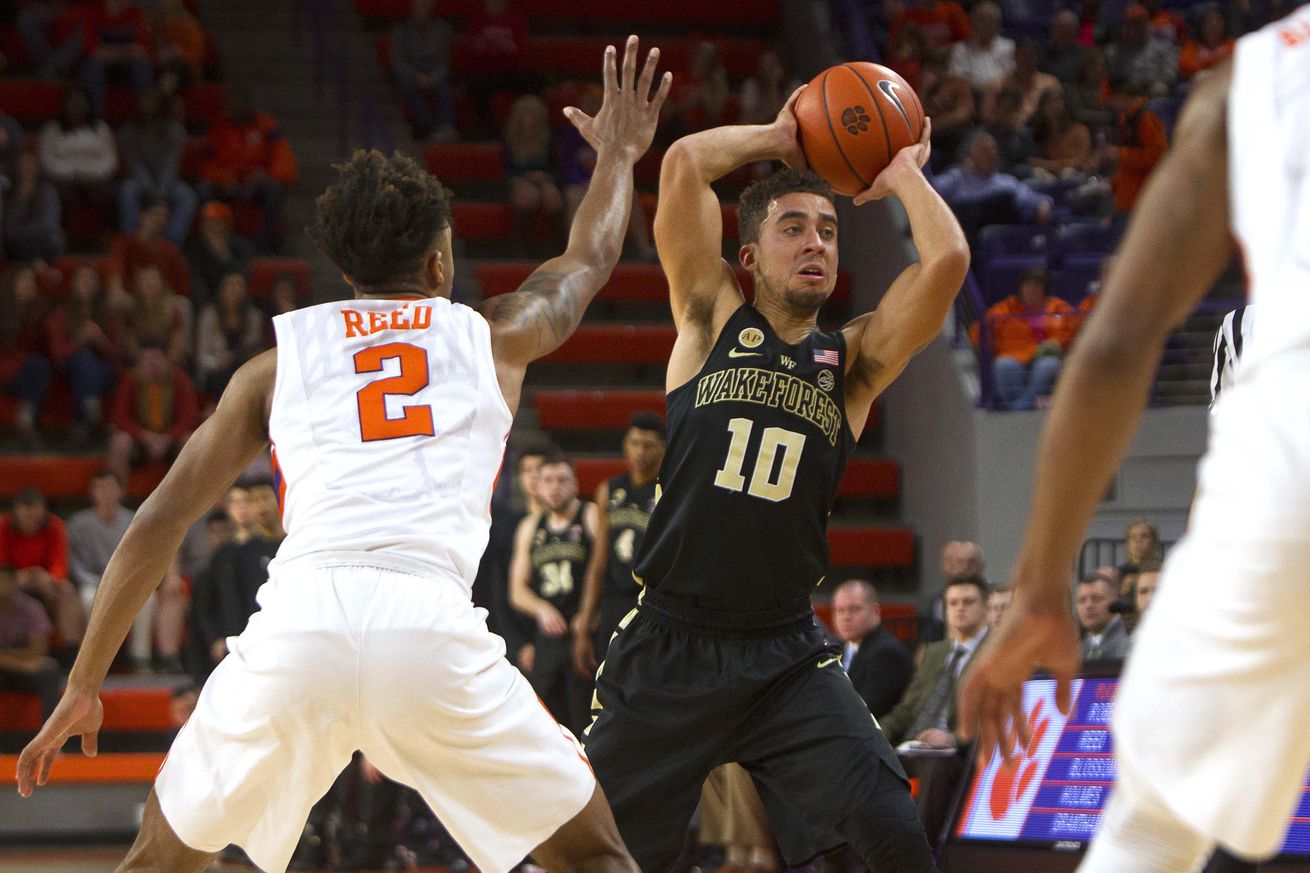 It was a much anticipated matchup between the Wake Forest Demon Deacons and the Clemson Tigers, but the Deacs played their worst game in months. The Deacons made it somewhat interesting late in the second half and cut the lead to six with a little over a minute remaining, but could not come close enough. Ultimately, Clemson defeated Wake Forest, 95-83.

The Demon Deacons dropped to 15-11, 6-8 on the season, while Clemson improved to 14-11, 4-9. Wake Forest played well for about the first 13 minutes of the game, but Wake allowed too much dribble penetration and early foul trouble led to too many free throw trips for the Tigers. Clemson entered the game shooting just 35.5 from beyond the arc, but made 53% (10/19) from beyond the arc in this one. Additionally, they were shooting just 71% from the charity stripe entering this one, but made 77% (27/35) against Wake. Clemson attempted 21 more free throws than Wake and those metrics were major differences in the game.

Wake won the rebounding battle by 8, but also had 8 more turnovers than the Tigers did. So many of those turnovers were travels or poor entry passes. They were simply careless and uncharacteristic of the Demon Deacons. Clemson forces a lot of turnovers, but these were largely unforced errors. Clemson did a nice job of double teaming Collins early on, but he has to be stronger with the ball.

John Collins and Bryant Crawford combined for 54 points, but they also combined for 11 turnovers. Clemson had just 10 on their own. They scored a lot of their points late in the game when Wake was making a comeback and down double-digits. I give them credit for battling back, but Collins scored a lot of his points late in the game once Elijah Thomas fouled out of the contest. He scored a career high in points (29) on just 14 field goal attempts, but it was far from his best game as a Demon Deacon. He gave up way too many points defensively, especially early on. He had one foul, and was so worried about picking up a 2nd foul that he gave free passes to any Clemson big trying to score down low.

This was disheartening. Wake Forest did not have nearly enough offensive movement in the first half, and did not play good enough on-ball defense throughout the game. The 95 points that the Tigers scored were the most that Clemson has scored in an ACC game during Brad Brownell’s tenure. 83 points should be enough to win a lot of games, but it’s obviously not enough when you nearly allow the century mark.

The season is not over, but it did just get harder to make the NCAA Tournament. Wake has to beat Pittsburgh at home, and really has to find a way to beat Virginia Tech on the road. They don’t have Chris Clarke, so it’s certainly doable. Let’s hope that the Deacs come out much more composed on Saturday afternoon.

Wake Forest now has the unfortunate pleasure of traveling to Durham on Saturday to take on Duke at Cameron Indoor Stadium. What are your thoughts about this one?

This article was originally published at http://www.BloggerSoDear.com (an SB Nation blog). If you are interested in sharing your website's content with SCACCHoops.com, Contact Us.
Categories: Clemson, Duke, Pittsburgh, UNC, Virginia Tech, Wake Forest