Bubble basketball is back. 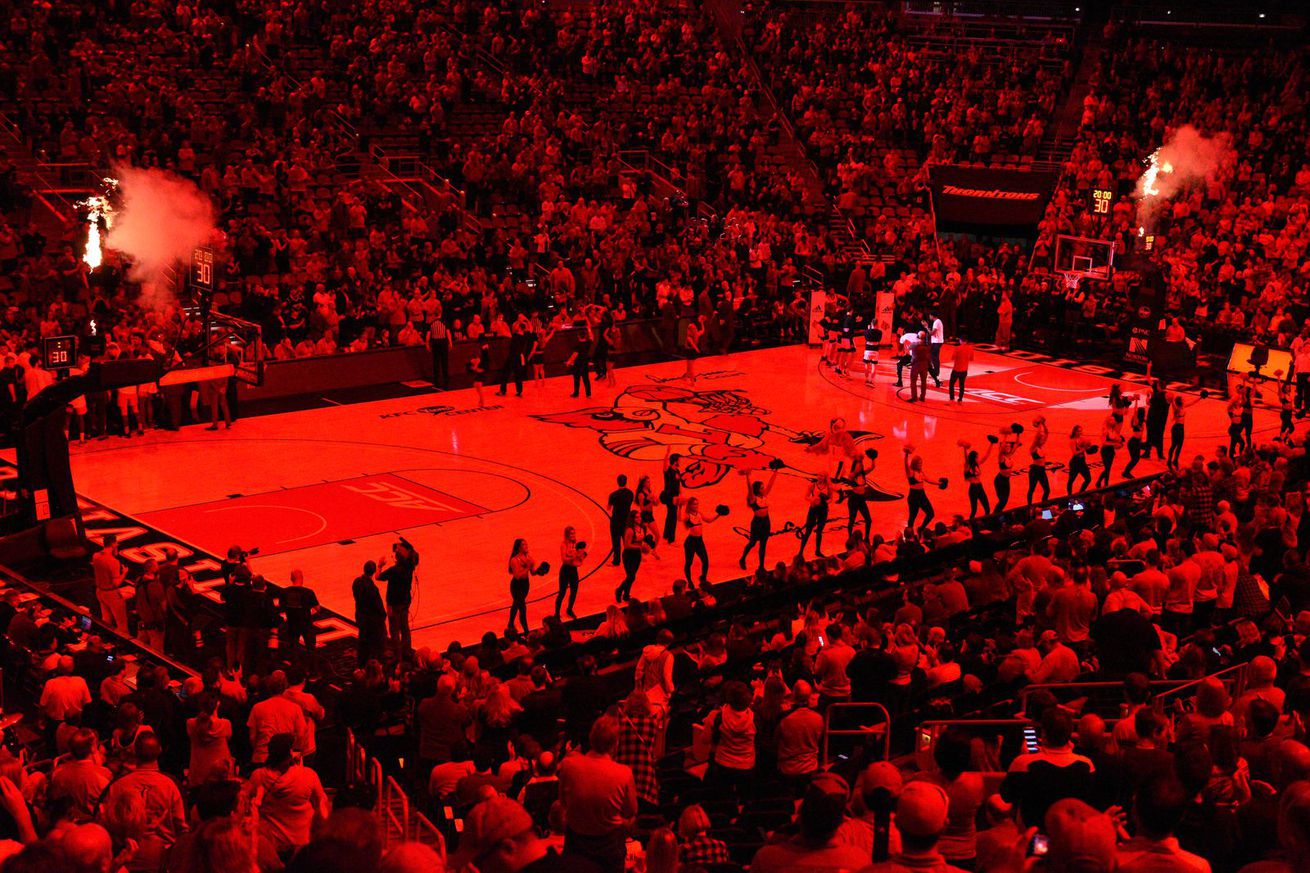 There are two things you probably know about Evansville’s 2019-20 season. One I’m assuming you definitely know.

The first thing is that a little over a year ago, the Aces walked into Rupp Arena as 25-point underdogs, and waltzed out with a 67-64 win over then No. 1 Kentucky. The second thing is that things didn’t exactly go swimmingly for them after that. They finished non-conference play with a solid enough 9-4 record, but trouble began to brew just before the calendar flipped to 2020. Head coach Walter McCarty was placed on administrative leave and ultimately fired after accusations of sexual misconduct surfaced. Evansville crumpled in the process, losing all 18 of its regular season games in the Missouri Valley, and bowing out in the first round of the conference tournament.

The offseason was equally unkind to the Aces.

First, DeAndre Williams — the team’s leader in both scoring and rebounding — transferred to Memphis. K.J. Riley, Evansville’s second leading scorer, was lost to graduation. Sam Cunliffe, the star of the Kentucky win who seemed to have finally found his footing after failed stints at Kansas and Arizona State, decided to opt out of the 2020-21 season because of Covid concerns. The team’s fourth and fifth leading scorers, Artur Labinowicz and John Hall, joined Williams in the NCAA transfer portal.

So what’s left? Well, a massive rebuild for Todd Lickliter, the former Butler and Iowa head coach who replaced McCarty in the middle of last season.

Of primary concern for Lickliter is the fact that he inherited a group of players fit for a different style. While McCarty recruited athletes who wanted to get up and down the floor, Lickliter likes his teams to play at a glacial pace and emphasizes execution in halfcourt sets. Ken Pomeroy projects that only four teams will play at a slower pace in 2020-21 than Evansville will.

Seniors Noah Frederking and Evan Kuhlman will likely lead the way for Lickliter this season. They spent their first season at Evansville playing for Marty Simmons — another halfcourt minded head coach — so the change in style should be less jarring for them. Frederking lives on the perimeter and should be marked there at all times. He attempted 140 three-pointers last season, and 44 two-pointers and 15 free-throws. Kuhlman is a steady 6’8 forward who also likes to stretch the floor and shoot the three, something he did at a 34.3 percent clip a year ago.

Aces fans are expecting big things from freshman Trey Hall, a 6’9 forward who should contribute greatly in the area of interior defense, a place where Evansville got particularly beaten up a year ago. JUCO transfer Iyen Enaruna and Pitt transfer Peace Ilegomah — who was extremely underwhelming in his first season with the program — will also look to help out inside.

The biggest question surrounding this Evansville team is where its scoring is going to come from. Nebraska transfer and former four-star recruit Samari Curtis will help significantly in that department, but he isn’t eligible until the spring semester. Until then, it’ll be 5’10 junior point guard Shamar Givance trying to make the Aces go. He is a true pass first floor general who saw his playing time steadily increase towards the end of last season. Still, Givance scored in double figures just once last season, and he doesn’t have a lot of options around him who can do a whole lot when they get the ball in a position to score.

The most attractive might be Emmitt Page, who averaged 21.9 points per game last season in junior college. He became the first player to commit to Lickliter at Evansville when he did so last April. Jawaun Newton should also receive his fair share of opportunities. The 6’3 junior scored 10 or more points in five of his last nine games a year ago. That stretch came after he’d failed to hit double figures in his first 48 college games.

Two other names that should ring a bell with Louisville fans will see the court for the Aces on Wednesday. The first is Jax Levitch, a former Trinity High standout and the younger brother of former Card David Levitch. The younger Levitch played two seasons at Purdue Fort Wayne before transferring to UNC Asheville, where he spent the 2019-20 campaign. His numbers haven’t been eye-popping, but he’s a 6’7 lefty who can knock down the outside shot at a high clip if he’s given enough space. Thomasi Gilgeous-Alexander (yes, Shai’s younger brother) is also hoping to make more of a splash this year after appearing in just three games as a freshman.

There may not be a whole lot to like about this Evansville squad on paper, but hey, Louisville’s less of a favorite in this game than Kentucky was 12 months ago.

—Louisville has won 16 consecutive season-openers, and 25 of its last 27.

—Wednesday marks the start of the Wade Houston Tipoff Classic, a 16-game season-opening event that will feature eight teams all playing inside the KFC Yum Center.

—Louisville has won 55 consecutive home games in November, a streak which dates all the way back to a loss to Vanderbilt on November 30, 1972. The Cards are 42-0 in November games played inside the Yum Center.

—Louisville has won 81 of its last 85 non-conference games at the KFC Yum Center, a mark which spans over the last 10 seasons.

—Evansville assistant Logan Bauman was a member of Louisville’s 2012-13 national championship team. He then spent four years on the U of L staff, the last three as the team’s Director of Video Operations (2016-19).

—This is the latest Louisville has played a season-opener since the 2003-04 season, which began on Nov. 29.

—Louisville had played six games, an exhibition game, a public instrasquad scrimmage and a closed scrimmage by Nov. 25 last year.

—This is the latest Evansville has played a season opener since 1995.

—Via Kelly Dickey, the 263-day wait from Louisville’s last game of 2019-20 until its 2020-21 season opener is the longest gap between seasons since 1987, when the Cards lost in the Metro Tournament final on March 8, declined an NIT bid, and opened vs. Notre Dame on Dec. 5.

—Louisville actually played a huge part in how Evansville got its school nickname. As the story goes, after UE defeated the Cardinals by a 59-39 final on February 6, 1925, U of L coach Fred Enke told UE coach John Harmon “You didn’t have four Aces up your sleeve, you had five!” Harmon quoted that to the Evansville Courier, and the nickname “Aces” immediately stuck, replacing the previous nickname, “Pioneers.”

—Louisville head coach Chris Mack played his freshman and sophomore seasons at Evansville, averaging 10.1 points, 6.4 rebounds and 3.7 assists as a sophomore in 1989-90.

—Louisville players are wearing the National Unity Mark on the front of their uniforms this season in support of an initiative born from the NCAA Division I StudentAthlete Advisory Committee, which also created a National Unity Pledge. In addition, “UNITY” is depicted in lettering below the player numbers on U of L’s home white uniforms.

—Approximately 3,000 fans will be allowed to attend Wednesday’s game, with all seating limited to the lower bowl and premium seating areas.

—Louisville has a 50-6 record during the month of November over the last nine years, winning 30 of its last 34 games in that month.

—Louisville was 18-0 last season when scoring at least 71 points, and just 6-7 when failing to hit that mark.

—Louisville has won 161 consecutive games when holding an opponent under 50 points.

—Louisville has won 154 consecutive games when scoring at least 85 points in regulation.

—Louisville is one of just four schools which have won 20 or more games on the court in each of the last 18 seasons. Gonzaga, Duke and Kansas are the others.

This article was originally published at http://www.CardChronicle.com (an SB Nation blog). If you are interested in sharing your website's content with SCACCHoops.com, Contact Us.
Categories: Basketball, Louisville, Preview