Are There Truly Any Heated Rivalries for Notre Dame Men's Basketball? - SCACCHoops.com

Are There Truly Any Heated Rivalries for Notre Dame Men's Basketball? 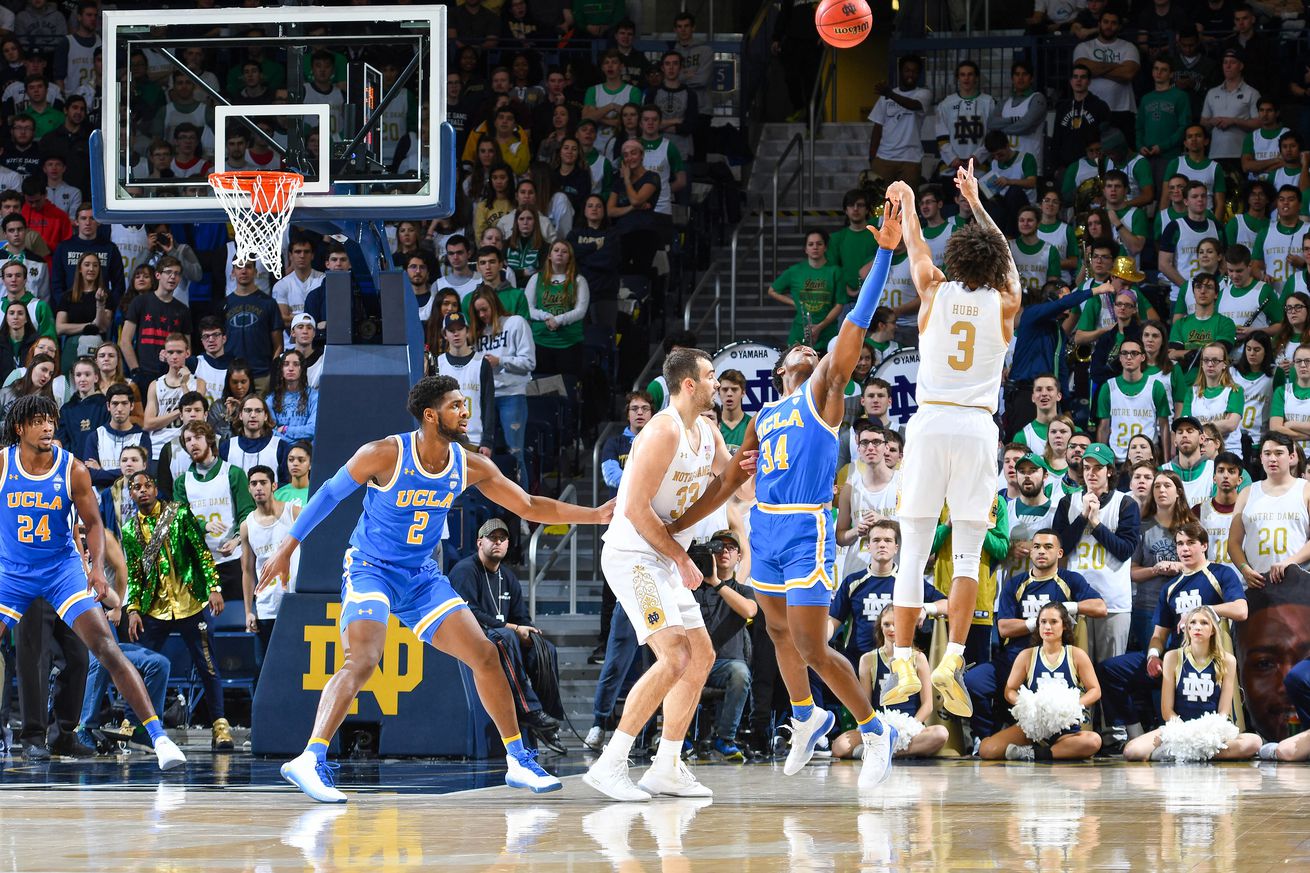 We’ve already had some coverage of some Notre Dame Fighting Irish rivalries, and you will see A LOT more coverage on that over the two weeks of rivalry talk. Today, I want to speak a little bit about Notre Dame Men’s Basketball and their rivalries.

I had the main thought of this after our overlords sent out a survey last week. We get these from time to time, and they are “SB Nation Reacts” surveys. SBN wanted to kick off Rivalry Week(s) by having us answer questions about our NCAA team’s rivals. One question was asking who we thought was NDMBB’s main rival. It got me to thinking that this is actually a tough question. When you’re the men’s basketball program at a football school, no matter how good the team might be or the following they receive, they will always be second tier to the football program. That is just the way it is. But, because of some historical reasons and the Irish jumping conferences, it might be tough to nail down exactly who would be the MBB’s main rival.

I wanted to provide some options for us to consider, as this is actually somewhat of a loaded and intricate question. Also, too, we could maybe see all of Notre Dame’s rivalries being “little R” rivalries instead of one school that is the biggest rival. I might try to have you all name one, though, if push had to come to shove.

Notre Dame Men’s Basketball began in 1896, so they have been around for a long time. The program has 1,880 wins all-time, and that puts the Irish at 8th in NCAA all-time wins. That is actually pretty remarkable, and I’m always amazed at that stat considering Notre Dame is definitely a football school. However, longevity helps the Irish here.

Even though they have been around for a while, it is a bit challenging to find THE rival for the Irish. We can take a look at some contenders, though. There used to be a decent number of rivals, but those have gone away, as I will explain.

This is a strong option as the biggest rival. The two teams played each other at least once every season from 1966-1995 and twice each season (mostly Home-and-Homes) from 1971-1983. I mean that is quite honesly ridiculous. In that time, it truly was a basketball rivalry. You had the back and forths with Digger Phelps and John Wooden. Many things about the rivalry culminated in the 1974 game when the Irish stopped UCLA’s 88-game winning streak. After that, it was a little more back and forth. But, because of the frequency of their playing and the intense games, this was a true rivalry back then. But now, the Irish and Bruins don’t play very much. This past season, the Bruins came to Purcell Pavilion, and the Irish got the win. It was cool to see a win over UCLA because of the history, but both teams were down. It’s not the rivalry it once was, and the hatred isn’t seemingly there. So, currently, I wouldn’t put down UCLA as Notre Dame’s biggest rival. They were, but not anymore.

Now, DePaul could be a viable option. Since 1950, the Irish have played DePaul 93 times, the most of any program since that year. This is partly because the Irish were longtime members of the Big East with DePaul. Playing each other twice a year for 20 years helps. But, even before the Irish played the Blue Demons in conference, the two teams would play twice almost every season from 1950-2013, an incredible stretch. Especially in the 70s, both teams were always highly ranked. The proximity, being two Catholic schools, and the times played would lend this to be the biggest rival for the Irish. However, like UCLA, the two teams stopped playing each other after. The Irish left to go to the ACC, which did not help. In 2017 and then in 2018, the two teams had a Home-and-Home series, but that is it. Like UCLA, the two were rivals, but I don’t think they are anymore; it has fizzled out.

Marquette is #2 in amount of times the Irish have played a team since 1950. For many of the same reasons as DePaul, they are not so much a rival anymore. Once the Irish left the Big East, that rivalry has not really existed. We will move on so not to seem redundant.

Now we’re talking as a potential option for Notre Dame’s biggest basketball rival. The Irish and the Orange have played consistently since both teams were in the Big East and now both in the ACC. I have always felt somewhat weird about claiming Syracuse as a main rival because they are clearly the rival of Georgetown. I don’t want to act like Purdue Football and think we are the rival to somebody. But, this might be a justified rivalry.

Games have been heated and intense since Big East play. Many times, the Orange would have our number, especially in those 2000s games. Those are the years with Carmelo Anthony and then Jerry McNamara who seemingly would hit EVERY shot against the Irish. Those shots also came from 40 feet away, or so I thought when he was dropping shots in from anywhere beyond the three-point arc. Man that was annoying.

Then, on a magical January night in 2012, the #1 Orange came into Purcell Pavilion and proceeded to get housed by a less-than-stellar Notre Dame team. The students stormed the court, and there was a spark to this competition. It has been a bit more back-and-forth in the last few years now that Syracuse has been a bit down. This is a strong choice for ND’s biggest rival because we have history with Syracuse, but there is still some intensity to the games each year in conference play.

This is actually going to be my vote if we have to pick a school for a “big R” NDMBB rivalry. Since 1950, the Irish have played Louisville just 40 times, but it has seemed like many, many more. Like Syracuse, the Irish have played Louisville every season since 1995 when the Irish joined the Big East. Since then, there have absolutely intense and tense battles on the court. In 2011 and 2012, the Irish and the Cardinals battled in back-to-back Big East Tournament semifinals. The Irish lost both times. Then, in 2013, the last year of Big East play for both teams, the Cardinals came to Purcell Pavilion. With time running down, and the Irish down by 8, Jerian Grant had his heroics to force overtime. But, overtime was repeated again, and again, and again...and again. In a 5 OT thriller, the Irish bested the Cardinals in a game I still can’t believe I witnessed in person. Bonkers doesn’t even describe how that game was.

*Peep those gold Adidas uniforms as well as baby Jerian, Connaughton, and Auguste.

Since that game and since there have been some doozies in ACC play, the Irish and the Cardinals have some bad blood. Like Syracuse with Georgetown, I don’t want to claim another school’s (Kentucky) rival as our own, but this one might actually make the most sense. The Louisville fans travel because they are just down the road 4 hours from South Bend. Louisville is JUST into Kentucky right after you cross The Ohio River out of Indiana. Plus, the games have been close, there is some recent history, and the conference tie-in. Even though they might not be an historical rival, I would put my stamp on Louisville being NDMBB’s biggest rival.

Am I off base? Am I right on the money? Who do you think is our biggest rival in men’s basketball? Let us know, and if it is another team, explain why in the comments.

This article was originally published at http://OneFootDown.com (an SB Nation blog). If you are interested in sharing your website's content with SCACCHoops.com, Contact Us.
Categories: Basketball, Football, Louisville, Notre Dame, Syracuse

Comments on Are There Truly Any Heated Rivalries for Notre Dame Men's Basketball?