Checking in as the Deacs look to complete next year’s roster. 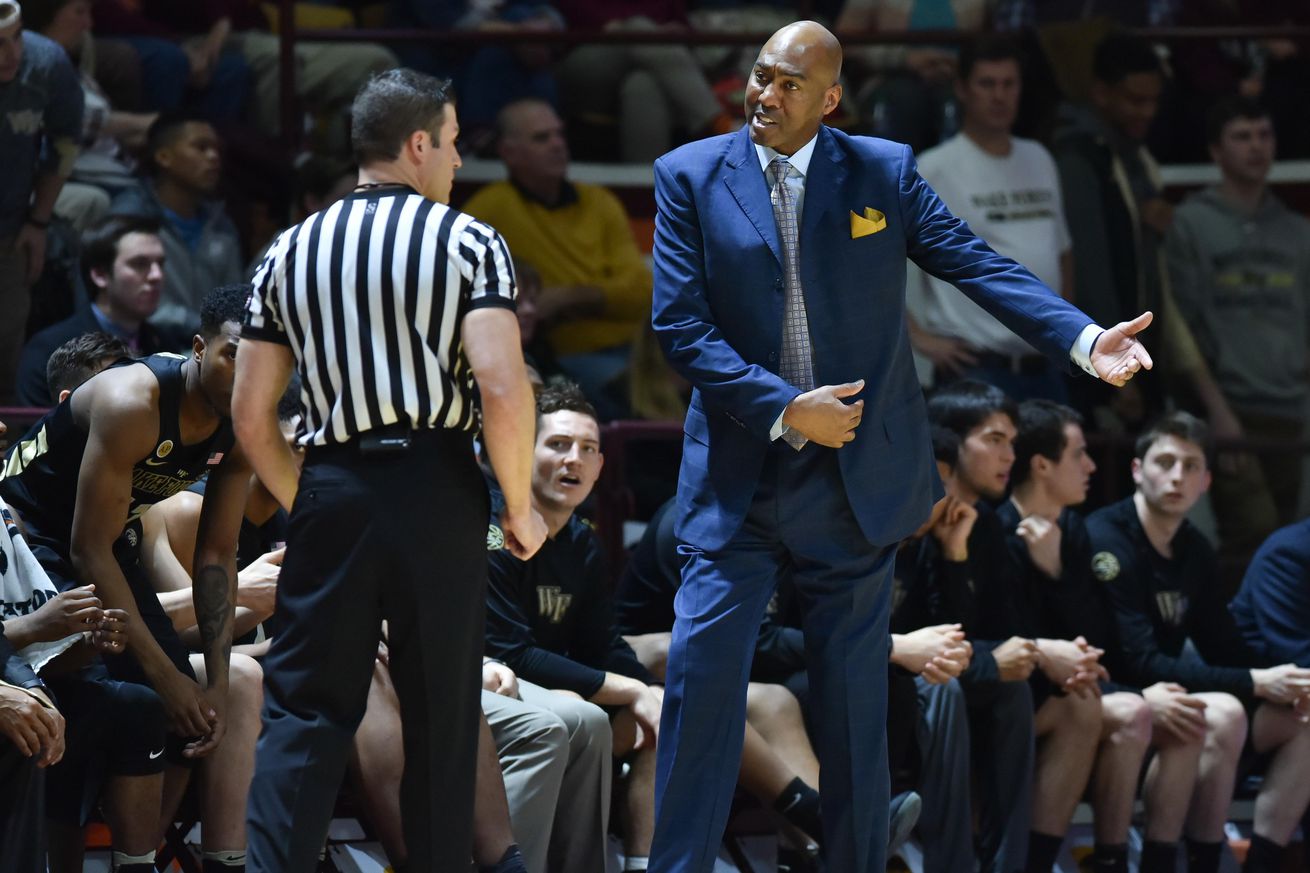 With John Collins officially moving on to the next stage of his career, Wake’s basketball team has one open scholarship for next year. At this stage of the recruiting cycle, it’s safe to say Wake is looking for a graduate transfer to fill the spot.

Update on Prior Prospects

Of these, Sengfelder has committed to Boise State, and it appears Wake is no longer in contention for Lane:

I have confirmed with a source: Fordham's grad transfer Christian Sengfelder has committed to sign with Boise State.

Longwood grad transfer Khris Lane tells me he will no longer visit Wake Forest. Plans to decide between VCU and Pitt in the next week.

Meanwhile, Donnal and Whitman have scheduled visits without any mention of Wake:

Finally, Alstork has received heavy interest from many programs (but does not list Wake as having shown interest) and has a visit set at Pitt in a couple of weeks.

It’s impossible to know what’s going on behind-the-scenes and whether the staff is actively pursuing any of the names mentioned above, or whether any cooling was on behalf of the staff or the transfers. Regardless, it’s not looking likely that any of the names we’ve profiled previously will end up as Deacs next year.

However, there are a few new names out there to consider:

Bryan Alberts, a guard for national runner-up Gonzaga, announced that he would transfer. As a redshirt sophomore, Alberts represents the relatively rare case of a grad transfer with two years of eligibility remaining.

Alberts was a 2-3 star recruit out of Village Christian in California. As a redshirt freshman last year, he played over 11 minutes a game but only averaged 2.6 points, 1.3 rebounds, and .3 assists a game. He did shoot just over 40% from 3pt, but on very low volume (23-57).

However, instead of having a bigger opportunity this year, he saw his role diminished. His minutes were reduced to just under 6 per game, and he only appeared in 23 of the team’s 39 games. He averaged 1.8 points, .5 rebounds, and 1 assist per game. Worse, his 3pt percentage fell to 20.7%, albeit on even lower volume (6-29). His 2pt percentage also fell from 45% to just under 37%.

It’s hard to tell much from the limited time he had on the court, but he is a tall guard who according to several write-ups has a good ability to defend the perimeter, something Wake has been seeking for a few years.

That said, I don’t think Alberts is the best fit for the Deacs right now. It would be great to add a perimeter defender, but ideally that defender would bring something to the table on offense, like an ability to hit the three and spread the defense. It’s possible Alberts can do that (he was scouted as a perimeter threat out of high school), but he hasn’t been able to shown it in his limited playing time. Plus, the fact that he has two years of eligibility left raises potential issues regarding the ability of Wake to sign a full complement of hopefully highly-touted recruits in 2018. It seems Alberts would be best-served by going to a mid-major program where he would have a good shot of being a major contributor for two years.

Illinois St's MiKyle McIntosh will declare for NBA Draft without an agent and then be a grad transfer if he doesn't go pro, per Dan Muller.

A few days ago, Illinois State’s junior forward MiKyle McIntosh announced he would test the NBA waters and go pro or play elsewhere as a grad transfer. A consensus 3 star recruit out of 22 Feet Academy in Kentucky, McIntosh was a strong contributor for the Redbirds (28-7) this year, averaging 12.5 points, 5.6 rebounds, and .9 blocks in 26.7 minutes a game. Not only was he active on the boards, but he averaged a respectable 36.3% from 3pt over the past two years (after a miserable 20% his freshman year). He fouled about as frequently as John Collins did last year (whether looking at numbers per game, per possession, or per minute). His free throw percentage has improved each year from 55% to 66% to 76%.

McIntosh also put together a solid defensive season. His Drtg (which estimates points allowed per 100 opponent possessions) was 93.8; the best (lowest) Drtg for Wake was Collins’s 105. McIntosh had a defensive plus/minus of 3.0, which would have been second-best on Wake (after Doral Moore’s 3.8).

I think McIntosh would be a great option for Wake. He’s not necessarily the type to light it up, but he is a enough of a scoring threat in the paint and on the perimeter to keep defenses honest. Beyond that, he has size and has shown good defensive ability. Of course, there’s the question of how well his talent would translate from the MVC to the ACC, but that question applies to almost any grad transfer we’re discussing.

The biggest obstacle here will be the competition. McIntosh isn’t listed on any mock drafts, so it’s pretty unlikely that he goes to the NBA. He does have the talent to get paid to play somewhere, but assuming he doesn’t go pro and stays in school, there will be a long line of suitors for one of the most compelling grad transfers on the market.

As of now, the only grad transfer to announce a visit to Wake was Khris Lane, who cancelled his visit a few days later. That said, I still expect the Danny Manning and the staff to find someone who can contribute in some way for a year. Stay tuned!

This article was originally published at http://www.BloggerSoDear.com (an SB Nation blog). If you are interested in sharing your website's content with SCACCHoops.com, Contact Us.
Categories: Basketball, Clemson, Recruiting, Wake Forest