5 Reasons the ACC will stay near the top of College Football - SCACCHoops.com

Back in January,  I asked could the ACC remain the nation’s best football conference after overtaking the SEC in 2016. The short was “no” as I think the days of total conference domination are over. The nation’s top conference will change from year to year. What I want to go into here is why the ACC will remain near the top of College Football and will be a part of that  best conference discussion in most years. Is there any concern the ACC could slip back into BCS era football? I don’t believe so, let’s get into those reason’s why ACC football is here to stay for the foreseeable future. 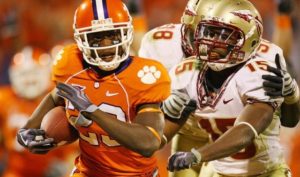 There isn’t any reason believe Clemson and FSU will be slipping back any time soon. Both powers recruit at a high level, and one or the other has played in the national title game 3 of the last 4 years. The one year that didn’t happen – 2014, FSU still made the playoffs. When you have a couple a couple football powers it always enhances your football brand. That’s what the ACC lacked for many years, but not now.

No conference outside of the SEC, produces more NFL talent than the ACC. Two of the last 4 Heisman Trophy winners have come from the ACC in Lamar Jackson (2016) and Jameis Winston (2013)

You know about Dabo Swinney and Jimbo Fisher… but successful coaches like Justin Fuente, Paul Johnson, Mark Richt, Larry Fedora, David Cutcliffe have all have 10+ win seasons within the last 3 years. Bobby Petrino, Bronco Mendenhall, and Pat Narduzzi are a proven winners. Really can you name 1 ACC coach, that enters 2017 on the hotseat? Some guys like Dave Doeren and Steve Addazio who have question marks won bowl games last year.

Penn State, Ohio State USC, Georgia (2), Texas A&M, Orange Bowl, Arkansas, West Virginia, Notre Dame – These are all teams that were defeated by ACC teams not named Florida State and Clemson. The conference has real depth that is unmistakable. There hasn’t been yet a 3rd team to make a run a playoff berth, but in 2016 Louisville was in the mix until late in the year. In 2015, UNC was an inexplicable opening day loss to South Carolina from being in position to for a berth at the end of the season. In 2014 Georgia Tech finished the #7 in the country. Other ACC teams have been in close to have playoff caliber seasons.

While the peak of the cable network bubble may have passed, the upcoming ACC Network will be a success and it will make money. It will increase exposure and revenue for the conference. If it is managed correctly by ESPN it will close the revenue gap with the SEC and Big 10. The ACC has moved to the top of college football with some monetary disadvantages the last few years. What will it do when it has more money? Money doesn’t guarantee success, but it never hurts.

This article was originally published at http://www.AllSportsDiscussion.com. If you are interested in sharing your website's content with SCACCHoops.com, Contact Us.
Categories: Clemson, Florida State, Football, Georgia Tech, Louisville, Notre Dame, UNC, Virginia