What are the ACC's chances of getting two playoff teams? - SCACCHoops.com

What are the ACC's chances of getting two playoff teams?

Every game in a precarious college football season carries with it a certain degree of risk. The Clemson Tigers have lost regular-season games in past years and still made the College Football Playoff. As long as they didn’t lose twice, they were fine. That reality still applies to Dabo Swinney’s team this week. If Clemson wins out and claims the ACC championship, the Tigers will be in the College Football Playoff. 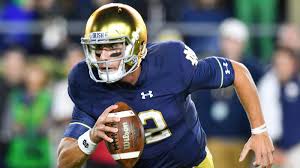 The bright and sunny outlook in the ACC is less about Clemson and more about the fact that Notre Dame now has a clear path to the College Football Playoff.

It’s actually very simple: Had Notre Dame failed to beat Clemson at home — with Trevor Lawrence not playing — the Fighting Irish, even if they had clawed their way to the ACC Championship Game, would have been in position to lose the rematch to the Tigers. Trevor Lawrence would have been waiting. A decimated Clemson roster might have gained reinforcements.

If Notre Dame’s only losses had been to Clemson, that still would have eliminated the Irish from contention. Teams can lose once — even to the best opponents — but they can’t lose twice. Notre Dame’s best chance of splitting a two-game series with Clemson was this past Saturday.

Now, the ACC has the perfect scenario: Notre Dame wins every game leading up to the ACC Championship Game. Clemson runs the table, beating the Irish in Charlotte.

The ACC would get two teams into the playoff in that scenario. Sorry, Cincinnati. Nope, BYU.

As for Texas A&M in the SEC, Notre Dame’s win over Clemson trumps the Aggies’ win over Florida.

Assuming the ACC gets what it wants — Clemson winning out, Notre Dame losing only once to Clemson in the ACC Championship Game, and not to anyone else — there is only one scenario which would deny the ACC two College Football Playoff teams, assuming that Ohio State will go unbeaten against a soft Big Ten:

Florida beating Alabama in the SEC Championship Game and finishing the season with one loss.

Notre Dame has a lot of pull, but Alabama would have more. If the Irish and the Crimson Tide both fail to win conference titles, and end their seasons with one loss apiece, Alabama would get the nod. The fact that Notre Dame’s Clemson win did not occur against Trevor Lawrence would be an easy and convenient way for the playoff committee to exclude the Irish.

Yet: How many people think Florida is beating Bama in a high-stakes game? Not many.

Let’s face it: The ACC has a great situation right now. As long as Notre Dame and Clemson don’t trip up before a possible ACC title game, a two-ACC playoff scenario is in great shape.

The ACC Question of the week is back with our esteemed friend and college football writer @MattZemek, Editor at @TrojansWire .