The Deacs were never challenged in this one. 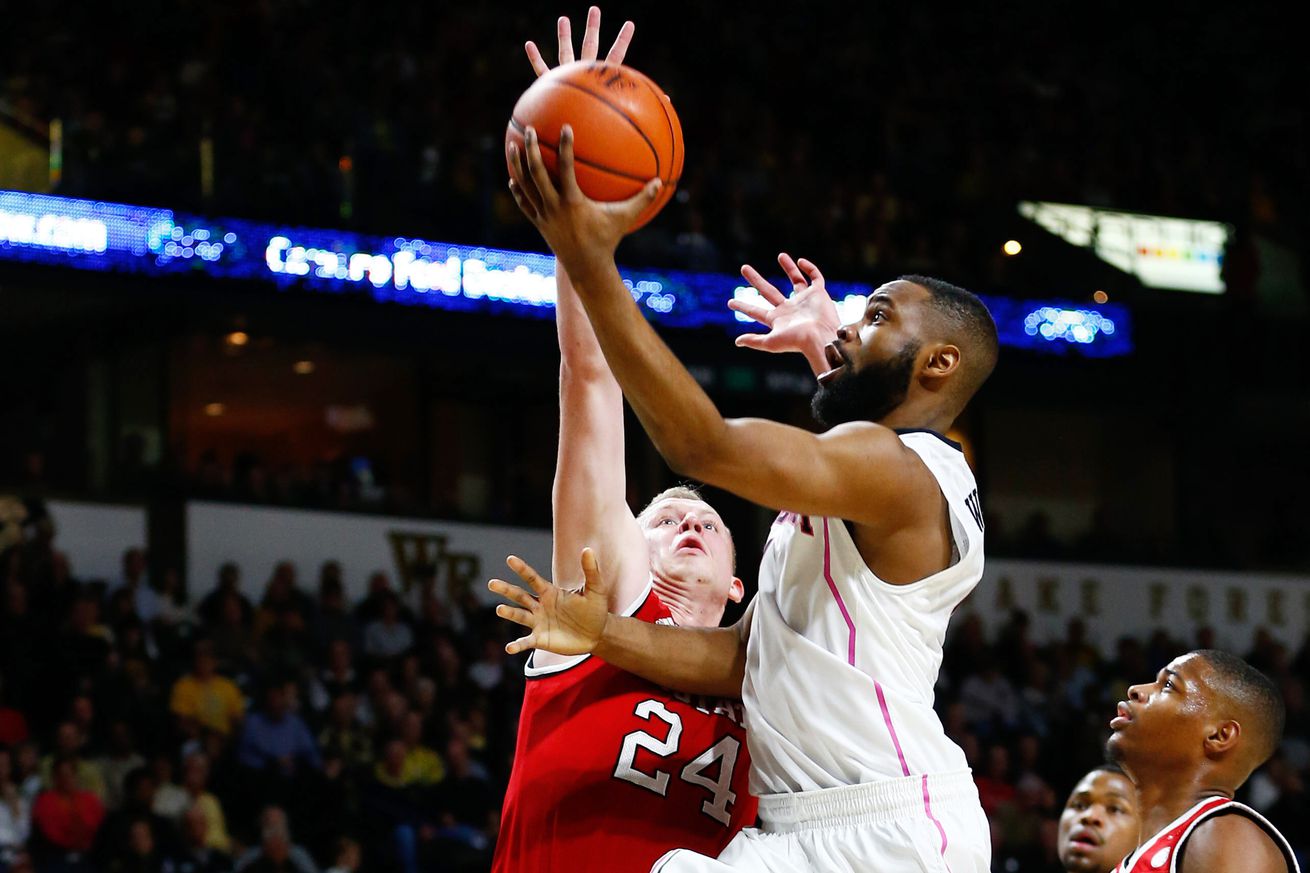 NC State won the opening tip, but that was about the last positive thing that happened to the Wolfpack on Saturday afternoon inside the Lawrence Joel Veterans Memorial Coliseum. Wake Forest’s John Collins quickly scored on a leak out dunk and the Deacons never looked back, as they topped NC State 88-58 to improve to 15-10, 6-7 on the season, while NC State fell to 14-12, 3-10.

Wake Forest was able to get off to a hot start by taking advantage of NC State’s poor communication/rotations on screening action and also pushing the ball after stops and makes. The Wolfpack were also careless with the basketball and turned it over 10 times in the first half, compared to Wake turning it over just 4 times. Bryant Crawford and Keyshawn Woods got it going for Wake from the outside, as the sophomore duo went 5-7 from beyond the arc en route to 20 combined points. The sophomore trio of Collins, Crawford, and Woods scored 34 of Wake Forest’s 44 first half points.

The threes by Woods were particularly big, as State was starting to cut into Wake’s lead, but Woods helped extend it out and finish the half strong. Crawford picked up his second foul with 5 minutes to go in the first half, so it was great to improve production with him on the bench.

Keyshawn Woods continued that exceptional shooting into the second half. The transfer from Charlotte was an assassin from beyond the arc and blew the game wide open with his three triples. With a 20 points lead, you can worry about energy in the second half, but I give Wake Forest a lot of credit for going for the jugular. They got a bit sloppy from the 8 minute mark to the 4 minute mark, as they didn’t make a field goal during that time, but were able to close the game out strong and get the freshmen and a few walk-ons some late game playing time.

NC State freshman phenom Dennis Smith, Jr. scored 17 points, but Wake Forest also forced him to turn it over 4 times. He was one of just two State players to score in double-figures, as Torin Dorn scored 14 points. State’s life won’t get any easier, as they host the North Carolina Tar Heels on Wednesday. The Tar Heels defeated NC State by 51 points on January 8th.

There really isn’t much to complain about in this one. I thought that the Deacs did a great job of getting John Collins the ball in the post and running the offense through him. More than that I was impressed with Wake Forest’s defensive effort. That side of the ball has certainly been problematic for Wake this season, but the Deacons limited NC State an offensive efficiency of just 79.7 points per 100 possessions. State hasn’t been a great team this season, but they have been a very good offensive team (37th nationally in adjusted offensive efficiency), so that was an outstanding defensive showing by Wake. All things considered, I would say that this was Wake’s best performance of the season.

The Deacons will head to Clemson on Tuesday looking to get to .500 in ACC play and also avenge a late game collapse against the Tigers that happened on December 31st. Wake Forest remains very much in the hunt, and a road win against a fellow bubble team could do a lot for the NCAA Tournament resume. We will have plenty of coverage of that game here at Blogger So Dear. What did you all think about this one?

This article was originally published at http://www.BloggerSoDear.com (an SB Nation blog). If you are interested in sharing your website's content with SCACCHoops.com, Contact Us.
Categories: Basketball, Clemson, NC State, Wake Forest