The list of potential Jim Boeheim successors is a short one - SCACCHoops.com

The list of potential Jim Boeheim successors is a short one

We don’t have to look too much further outside the Syracuse basketball family to find the program’s next head coach. 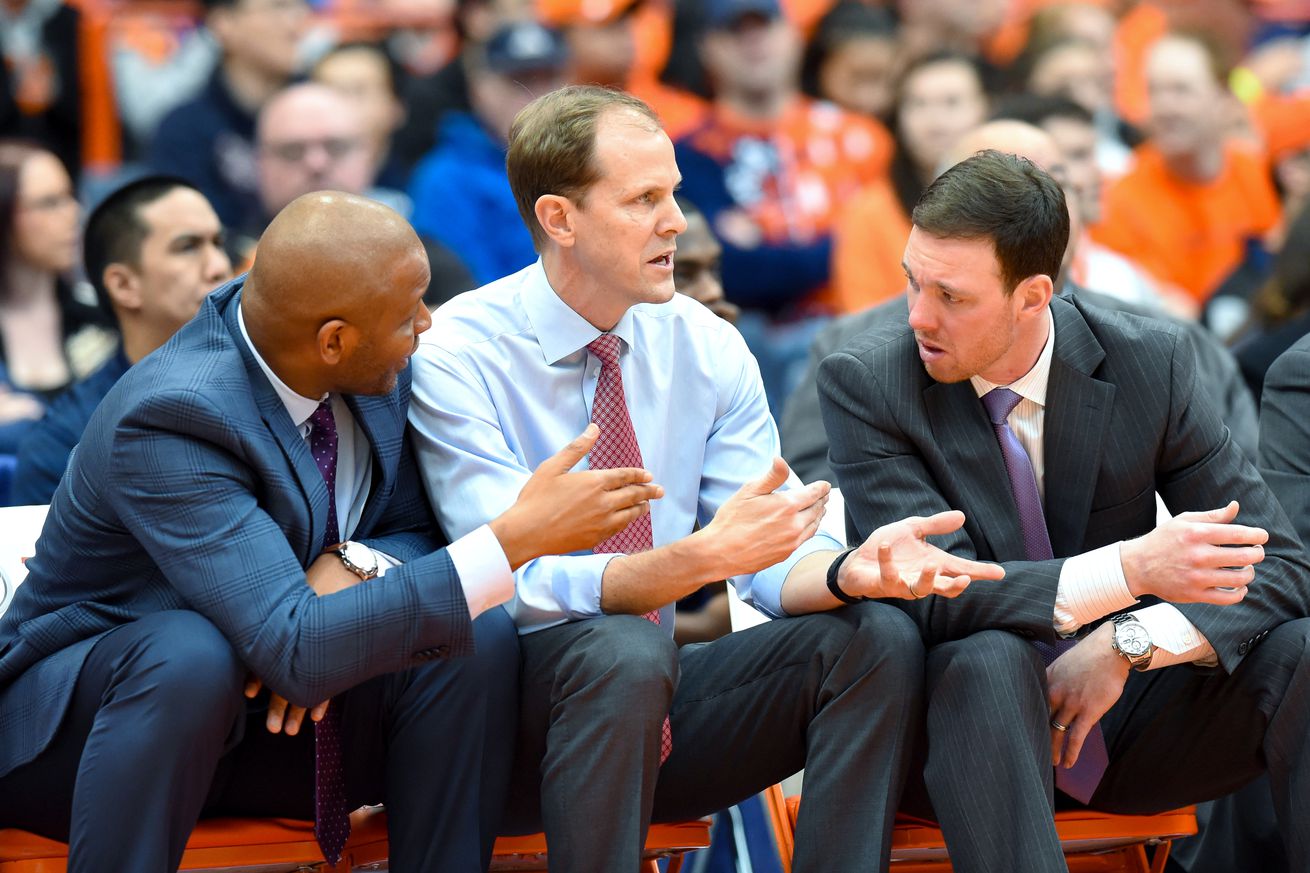 The Syracuse Orange men’s basketball season is set to begin less than three weeks from now with the first scrimmage just 20 days away. So, naturally, the conversation around basketball is picking up as we get closer to the season. In what’s become topical around Syracuse and the ACC, Jim Boeheim’s (evergreen?) pending retirement feels like a conversation we need to rehash, no matter how banal.

It seems fictional to think that Boeheim, 76, is set to embark on his 46th season as the head coach of his alma mater. He’s outlasted all of the old Big East coaches and will likely blow past his ACC contemporaries too. College basketball has been obsessed with Boeheim’s retirement for the better part of a decade now. With ACC Hall of Fame counterparts Roy Williams of North Carolina calling it a career and the curtain call of Duke’s Mike Krzyzewski in 2021-22, expect the Boeheim retirement conversation to intensify.

There’s no clear end in sight and Boeheim shoots down the idea of retirement time and again. Yet reporters continue to ask and prod no matter how trite the topic becomes.

“I have no plan to retire. Now does that mean I won’t retire? I feel great.” Boeheim said on the Field of 68 Podcast to Jeff Goodman. “If I didn’t feel great, I’d retire. If I wasn’t motivated, I’d retire. None of those things are true.

“I’ve got great staff. We’ve got guys that could take over at any time. We don’t have to go outside [the program]. Duke and North Carolina have proved this year you bring someone from inside and you move on. That’s the best way to move on in a program.”

And that’s really where the buck stops, isn’t it? Because as much as we continue to contemplate Boeheim’s eventual retirement and Syracuse’s succession plan, we already know how this is going to go down.

Barring some sort of imbroglio inside the program, Boeheim — just like Williams and Krzyzewski — will have his say on successor when it’s time to call it quits. He might feign powerlessness, but he will cast his vote and the eighth (!) head coach at Syracuse is going to be one of three people: Mike Hopkins, Adrian Autry or Gerry McNamara.

We can toss out interesting potential successor names like Big East coaches in, say, Kevin Willard or Ed Cooley. Someone will mention Rick Pitino for some weird reason. We can even throw Billy Donovan into the mix because that’s what we do every time a head coaching job becomes available in college basketball.

But that’s all conversation for naught.

Syracuse will hire one of those three aforementioned coaches, likely at a discount, and we’ll move on.

Now, if you know anything about power you know it’s ephemeral in nature and it often shifts. For some, the Hopkins ship might’ve sailed by now. That could very well be true. We’ll see how things shake out in Washington.

But timing is everything and it feels like the longer McNamara sticks around — and the longer Boeheim coaches at Syracuse — the better chance he has at being the next Syracuse head coach. Autry, pragmatically, has the most experience — including assistant coaching experience at Virginia Tech. Despite Autry being pretty damn good, McNamara has the greater legend as a player with a Nation Championship, pair of Big East Tournament Championships and four appearances in the NCAA Tournament. It wouldn’t take much convincing for people to fawn over McNamara.

All of this depends on the when of the retirement. Sometimes that happens sooner than anticipated. Or, Syracuse could have a new Athletic Director by the time the decision gets made. But irrespective of AD, Boeheim will make his suggestion and Syracuse will go with it.

Maybe it’s naive, but it’s easy to believe Boeheim when he says things like him not having a plan to retire or how he could to coach into his 80s.

Regardless of the when, it’s already known who the next head coach of Syracuse will be. We don’t have to look too far.

“We’ll play our centers. There will be times we’ll use a three-forward lineup. But not like last year. Jesse, Bourama and Frank has gotten a lot better as well.”

“I think Jesse’s better on both ends. I think he’s still getting there because he never played before. In the Netherlands, I think he played soccer. He’s still a little ways away but he’s getting there. So we’re happy to have him.”

On his gift to Krzyzewski in his final game at the Carrier Dome:

“I get excited every year for this team. I’ll be excited for next year too.”