As much as you can take away from a scrimmage, that is. 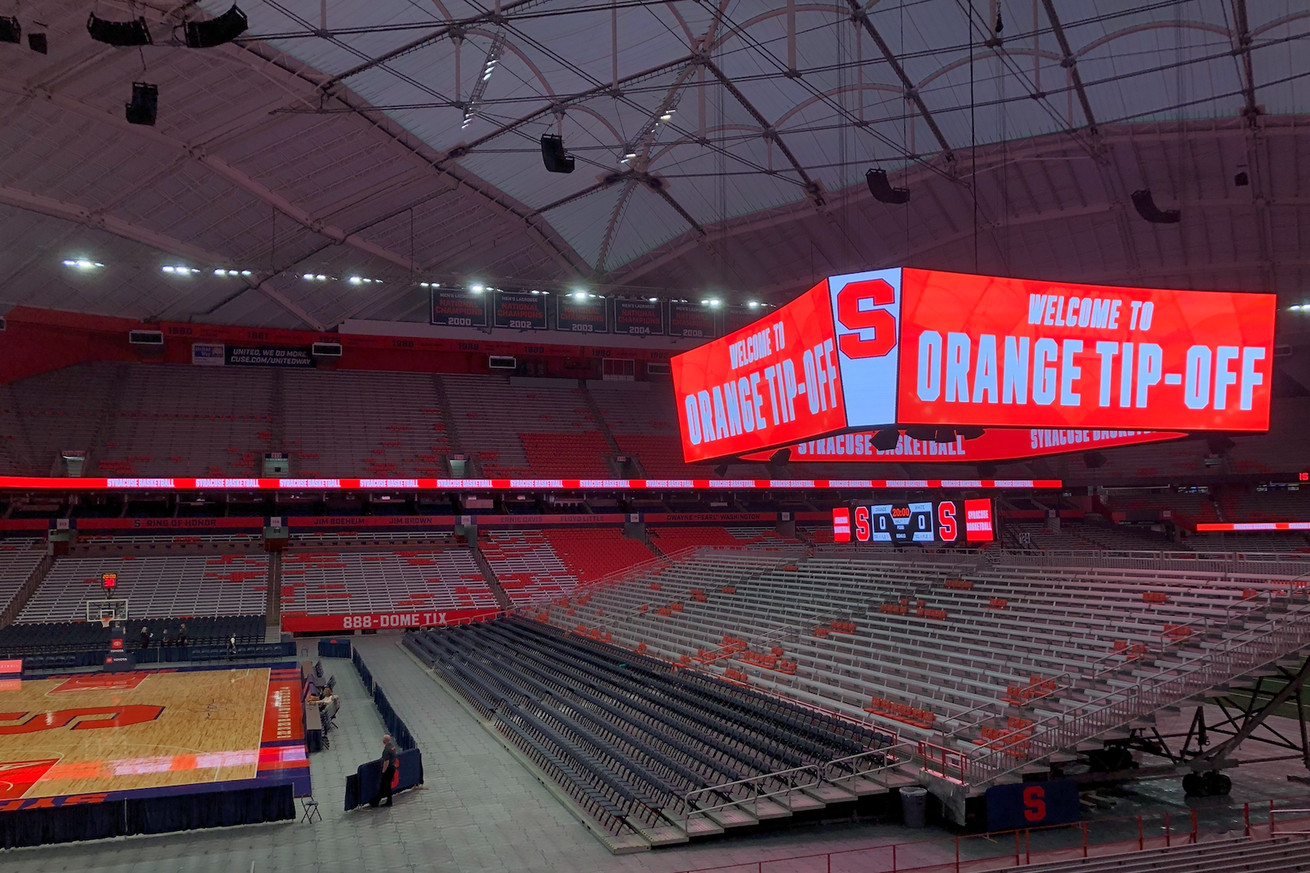 SYRACUSE, N.Y. — The Syracuse Orange men’s basketball team hosted its annual Orange vs. White scrimmage from the Carrier Dome on Friday night. The usual dunk and three point contest took place as well as a pair of contests for fans.

A modest yet engaged crowd came out to get the first look of the 2021-22 team. The players appreciated it. “It’s good to see fans back,” Buddy Boeheim proclaimed during warmups. “That’s for sure.”

Syracuse had two scholarship players that did not participate in the scrimmage. Cole Swider and Bourama Sidibe sat out of the competition. Swider hurt his ankle but he’s expected to participate in practice on Tuesday, according to Jim Boeheim. He still participated in the three point shooting competition, however. Syracuse is also hopeful to have Sidibe back in practice next week as well as he continues to be plagued by his knee.

In the dunk competition, Frank Anselem had the most interesting slam of the night. He took a page out of Gerald Green’s book and blew out a cupcake as he dunked above the rim. But Benny Williams won the contest with this slam:

As for the scrimmage, here are a few reflections:

Jimmy Boeheim transferred in from Cornell and despite his dad’s jokes (dad jokes?) on Syracuse being a harder academic institution that the Ivy League school, he was able to flash his hoops IQ in the scrimmage. Jimmy came out and buried his first three triples — the third on younger brother Buddy — and finished inside the paint to boot.

Don’t do it to him, Jimmy pic.twitter.com/M7EpSPwQhE

Let’s allay any Syracuse fan fears: Jimmy is going to be just fine at Syracuse. He can play.

Water is wet, the sky is blue and women have secrets.

Oh, and Buddy Boeheim makes 3s. This was on display on Friday night.

Nothing new to see here. Carry on.

Incoming freshman and top recruit Benny Williams is going to be difficult to keep off the glass. He has bounce or bunnies or whatever the kids are calling it these days.

Williams was eager to get offensive rebounds and looked comfortable taking shots from 15-feet and out. If he can learn the zone quickly, the sky is the limit.

Center position up for grabs

Sidibe not being able to participate in the scrimmage is not a good sign. But Syracuse is hopeful to have him back in practice next week.

If Sidibe is unable to play, the good news is that Syracuse had depth at the center position. Jesse Edwards and Frank Anselem went against each other in the scrimmage and both look improved. Edwards looks more comfortable than last year and he had a few nice moments on offense, but Anselem shined on the offensive end. He had two dunks that really displayed his athleticism.

It’d be foolish to asses the defense in a scrimmage where both teams played man-to-man, but the jury is still out on who the starting center is.

Joe Girard played with bravado in the scrimmage, something he seemingly lacked a season ago. Girard hunted his shot and buried them. He dished to teammates with confidence and instructed them on where to be on the floor. For what it’s worth, he knocked down 13 of his 15 triple tries in the three point competition too.

It’s still early, but if Girard is playing the way he did on Friday all signs point toward a bounce back year for the junior guard.