Can the Orange give Syracuse fans a warm welcome back? 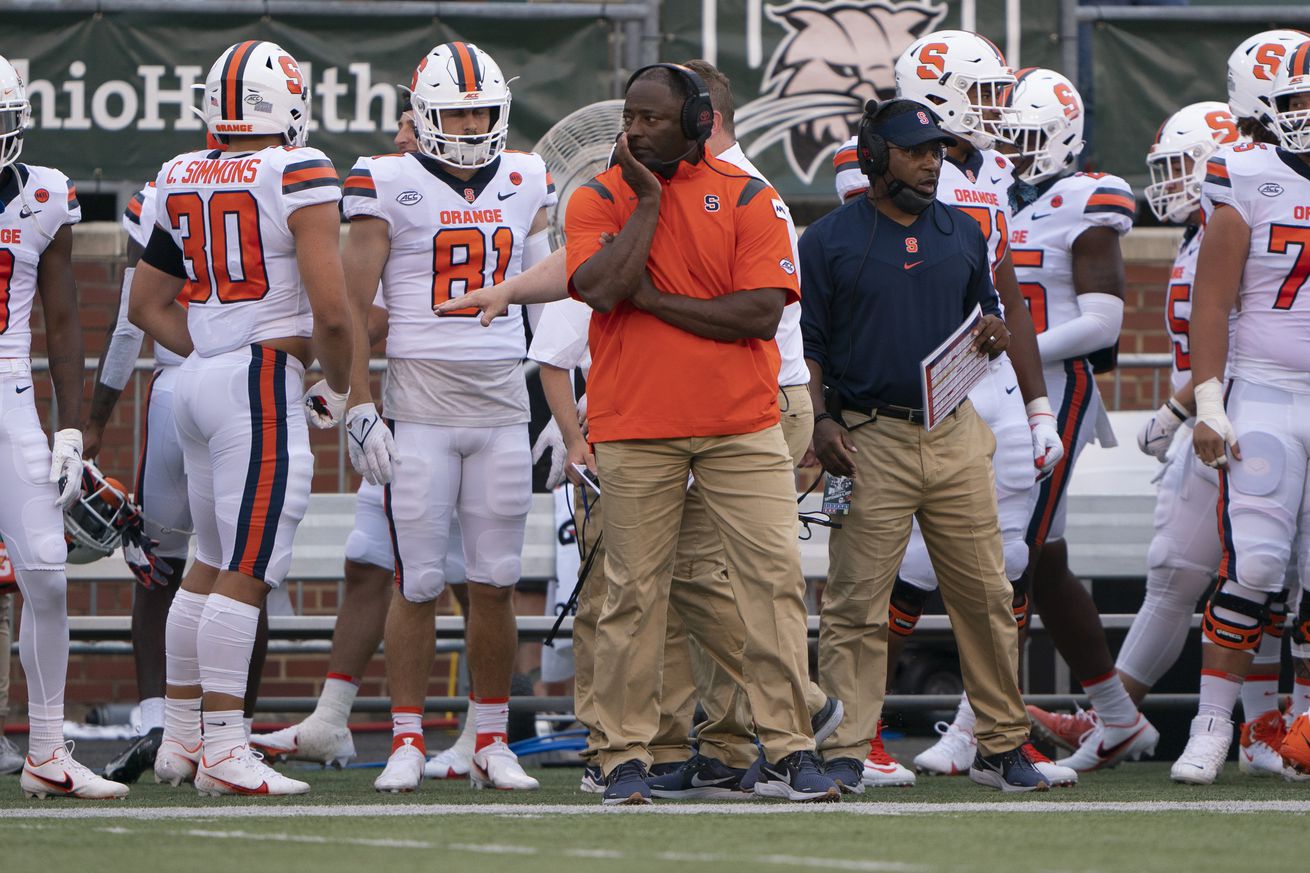 Hopefully a win on Saturday has everyone right back in the rhythm of a typical game week. Since we’re just two days away from the Syracuse Orange football team’s matchup against the Rutgers Scarlet Knights, we’re focused on every angle of the game. So before things kick off at 2 p.m. ET from the Carrier Dome, we let you know the five biggest things you’ll want to watch out for once things get started.

Kevin: Wrinkles in the passing game

Greg Schiano is a good defensive coach so I expect him to try and take away both the running game and Taj Harris as the top option for Tommy DeVito. We all know the last few years have seen DeVito lock in on Harris early and often so I’m curious to see how Dino Babers and Sterlin Gilbert adapt. Will they move Harris around to get him touches or will they design some plays that use him as a decoy. If Rutgers is going to commit two defenders to Harris while stacking the box against the run, how will Syracuse look to move the ball?

Steve: Continuity in the run game

Sean Tucker was the star of game one. We know he’s talented and showed it against Ohio, who despite their experience is still a MAC front. Rutgers stifled the Temple offense to a degree, but they still gave up 4.1 yards per play and weren’t pressed on the ground a ton as the game was already getting out of hand early thanks to turnovers. Going into the season, the run defense was a question mark, especially at the line of scrimmage. The Orange will need to man up in the run game and keep Tucker moving, keeping Schiano honest and limiting him being able to dial up Olakunle Fatukasi coming after DeVito.

Beyond Tucker, you could argue no Syracuse player had a bigger impact on the win over Ohio than true freshman Duce Chestnut. The Bobcats seemed to go after him often to try and take advantage of inexperience, to little avail. But now that the cat’s out of the bag on his talent, I’m curious how Rutgers might approach throwing the ball his way (or not). Duce will be extra motivated going up against plenty of familiar faces on the Scarlet Knights from his home state of New Jersey, so that’s a potential plus. We’ll learn a lot about the young star-in-the-making, though, by how he responds to that dynamic plus a week of praise heaped his way.

Christian: Punch it in

Given how strong Rutgers’ defense looked against Temple, you’d think that points are going to be at a premium this weekend. That’s why Syracuse cannot afford to leave points on the field like they did in the middle of the game against Ohio. The Orange’s red zone efficiency issues have persisted around the team longer than I’ve been around the program. SU will run out of time if it can’t get the ball into the end zone when it’s inside the 20-yard line. We’re expecting both defenses to show up and play hungry. Whichever team can execute (not that one, Brian Kelly) in the red zone better had the clear upper hand in this game.

It’s certainly not sexy, but there is a strong chance the Orange offense struggles early against an aggressive Rutgers defense. Additionally, special teams won the day for the Scarlet Knights against Temple, and a domed stadium doesn’t nullify that strength. If the Orange want to maximize their chances in this game, they’ll need to spar in the special teams game with Williams, who we didn’t see much of against Ohio. With just two punts averaging 35 yards, none of them pinning Ohio inside their own 20, the freshman was fine. However, we’ve seen that for Orange teams to win close games, special teams need to be more than fine, and I have a feeling that holds true on Saturday.