Syracuse vs. Miami preview: What to watch for - SCACCHoops.com

Syracuse vs. Miami preview: What to watch for

Yes, Jim Larrañaga, Syracuse feels so bad that your team has just seven players that see the floor. 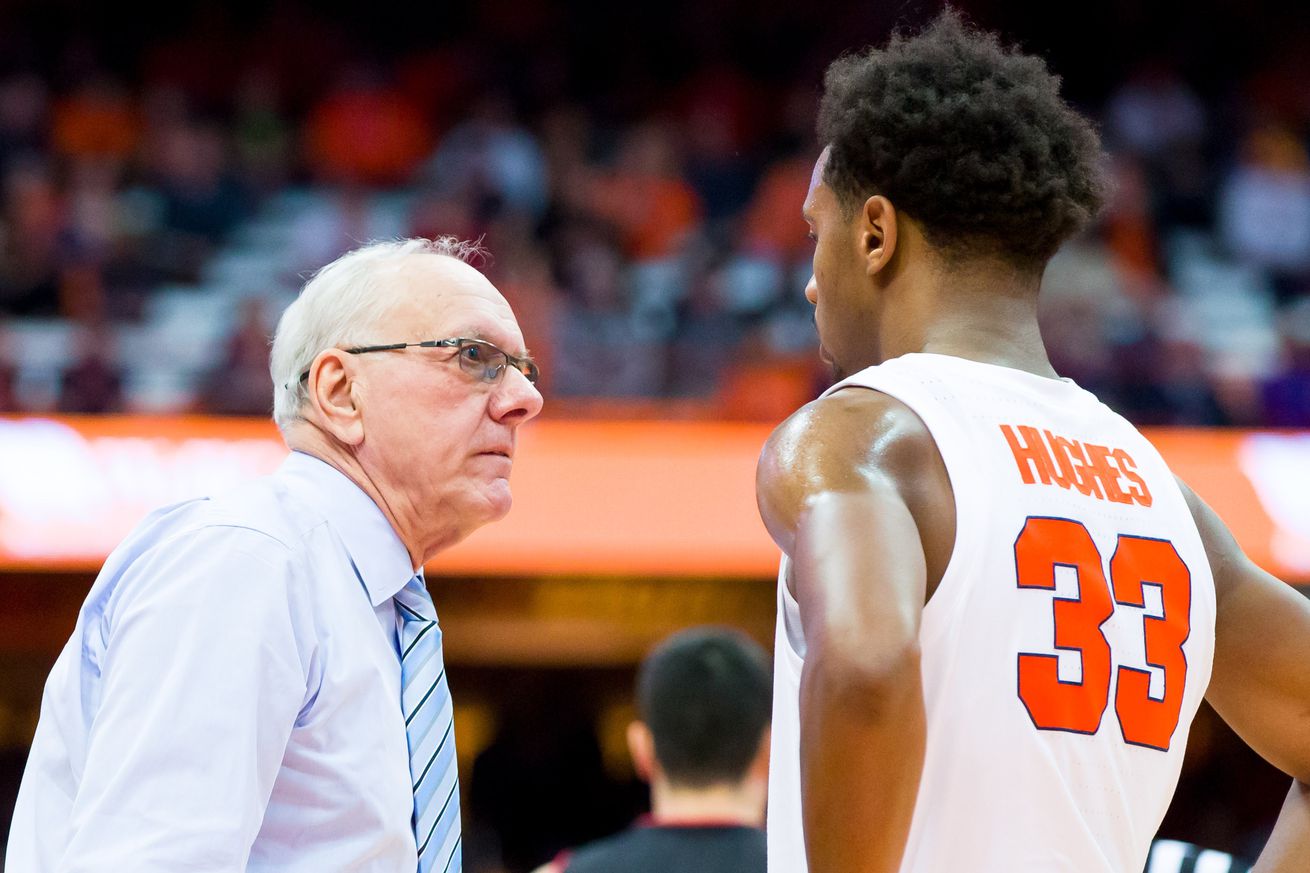 The Syracuse Orange men’s basketball team (13-5; 4-1 ACC) will play host to the Miami Hurricanes (9-8; 1-4) on at 8 p.m. ET on Thursday night at the Carrier Dome. SU is off to a hot start in ACC play, and are winners of two straight games. The ‘Canes, meanwhile, have won just one of their first five games in conference play.

Miami comes into the contest severely undermanned with just seven healthy scholarship players. Jim Larrañaga’s squad has seen their share of bad luck with injuries and the team is caught up in the NCAA corruption case that has led to the suspension of Dewan Hernandez. During the most recent ACC teleconference, Larrañaga noted that the last five to six minutes of games have been especially challenging with his team’s lack of depth. In other words, Miami is having a taste of what life was like for the 2017-2018 Syracuse team that went to the Sweet Sixteen.

Here’s what we’re watching for:

Paschal in the paint

Ebuka Izundu, a 6-foot-10, 230-pound center, averages 12 points and 5 boards per game. He’ll be a tough matchup for Syracuse’s centers — Marek Dolezaj in particular as Dolezaj will cede 50 pounds to Izundu. Izundu is a bouncy big man that moves well and has soft touch around the rim. He presents a similar challenge around the basket as Georgetown’s Jessie Govan had posed earlier this season.

More than likely, this game will shake out as a Chukwu game for Syracuse. Luckily, Paschal Chukwu has stepped up in a huge way for the Orange in the last two games — between the two, he has combined for 16 points, 29 rebounds and 6 blocks. Chukwu will need to be a presence in the paint and on the glass once again to prevent Izundu from dominating inside.

Miami is shooting 36.5 percent from three so far this season which is an above average clip. The amount of capable shooters that the team has will pose a challenge for the Orange on the defensive end. Dejan Vasiljevic, a 6’3” junior guard from Austrailia, leads the way for Miami, knocking down 44 percent of his threes on six attempts per game. Chris Lykes is shooting 37.5 percent, Anthony Lawrence is at 37 percent and Zach Johnson, 32 percent.

As per usual, Syracuse will need to make sure they are closing out on shooters to prevent Miami beating them via an air raid. The Orange would benefit from challenging the Hurricanes to beat them from the inside as Syracuse outsizes Miami on the interior.

Syracuse has played two of their highest-paced games of the season over the last two games — games in which the Orange were clicking more than they had so far this season. Miami’s lack of depth makes them vulnerable to the pressures of an increased pace including managing stamina and foul trouble.

After averaging 13.3 field goal attempts per game over the first four ACC games, Elijah Hughes attempted just seven shots in Syracuse’s most recent game against Pittsburgh. Hughes wasn’t getting as many touches as he does usually and there was no obvious reason. The game marked the first time that Hughes failed to reach double digits scoring in ten games. Though the lack of production was likely due to game flow, it will be worth monitoring if Syracuse will make a concerted effort to get its best three-point shooter going on Thursday.

Tyus Battle played all 40 minutes of both of Syracuse’s games last week. Here’s a list of honors Tyus Battle received over the past week:

So, Syracuse should keep getting him the ball and letting him do Tyus Battle-like things. Enjoy this quick highlight reel of Battle leaving Duke defenders in the dust and putting them on the floor:

This article was originally published at http://nunesmagician.com (an SB Nation blog). If you are interested in sharing your website's content with SCACCHoops.com, Contact Us.
Categories: Basketball, Miami, Preview, Syracuse