Syracuse vs. Clemson preview: Five things to watch for - SCACCHoops.com

Syracuse vs. Clemson preview: Five things to watch for

Other than the obvious: “pain” 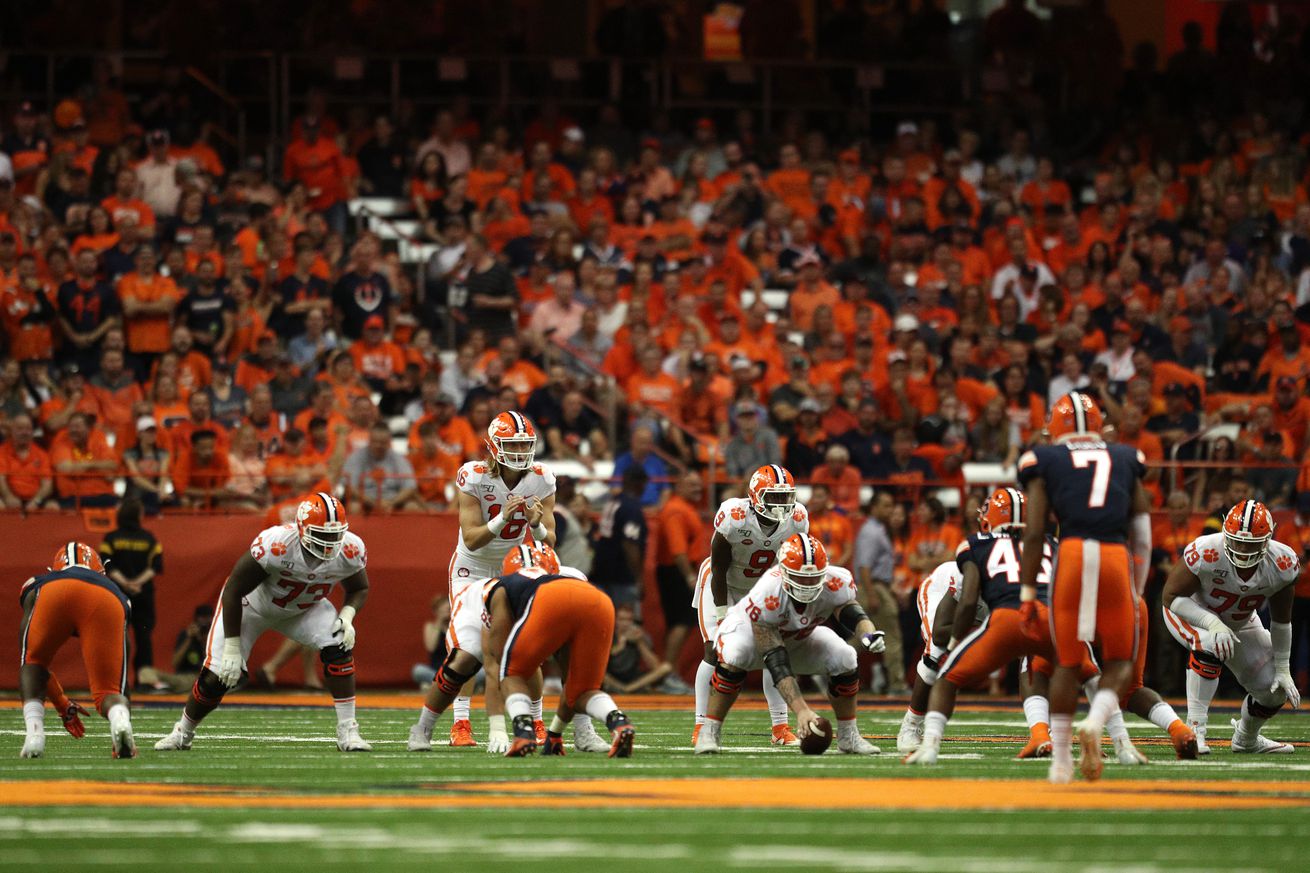 The Syracuse Orange football season trudges on, even if you’d prefer it didn’t. Next up on our tour of woe: the No. 1-ranked Clemson Tigers.

You’d be forgiven for being so distraught about Syracuse’s loss to Liberty that you missed the Tigers dismantling Georgia Tech, 73-7 last weekend. But we’re here to remind you that it happened, and probably gives us some clues about the sort of drubbing in store for the Orange come Saturday down in South Carolina. That said, we’ll try to get creative with this preview, because there are still some takeaways within the margins that fans should look out for.

John: Stopping the wheels from falling off

You know that feeling in any game — Syracuse or otherwise — when the team trailing finally can’t muster up enough to get a stop anymore. It happened to the Orange this past Saturday vs. Liberty when our fate was sealed by the early fourth quarter. It happened against Duke, Pitt and UNC, too.

In this game vs. Clemson, we’re not so much entertaining the idea of an upset or even playing within a few scores. Rather, I’m curious to see what happens when this Syracuse team is clearly done for — how do players and coaches respond? Do we see bigger risks taken and more wide-open play-calling? Or does ‘Cuse opt for a more conservative approach to slow the bleeding and just get out of Death Valley in one piece?

How a team performs overall vs. Clemson isn’t a great bar for their season. But SU stopping the fourth quarter from being repeated 60-yard touchdown runs by the Tigers’ seventh-string running back would be an ideal goal that tells me this team hasn’t quit just yet.

Christian: How many more offensive “wrinkles” will we see?

One of the biggest positives that Syracuse fans could take away from the Liberty game was that there seemed to be more offensive variety in the play calling. Not every running play was up the middle and not every pass play was a deep shot up the field. If the run defense didn’t look so poor, the improved offensive looks that Syracuse showed would’ve been the dominating storyline from the Liberty game.

That doesn’t mean that all the offensive issues were resolved. Syracuse still struggled on third downs, the tight ends are still not as involved as I would like, and the coaches seem unwilling to run the ball with players not named Sean Tucker. So this ties into John’s point: how creative does the play calling get? If there was a game that could give the Orange an opportunity to play around and try different things on offense, this would be it since not many people expect Syracuse to beat Clemson. Who knows? Maybe more diverse play calling can give the Orange a few shock points on the board that might make the Tigers uncomfortable.

Kevin: How will young players respond?

Look I’m not going to stress over the final score in this one, but I’m going to watching to see how Syracuse responds. With a number of young players being forced into extended playing time, will they roll over or will they battle Clemson? I want to see the Orange playing to the whistle- finishing blocks, hustling to get in on tackles, etc. The Tigers are the class of the ACC (if not the entire country) so Syracuse needs to develop the mentality that this is how they must play if they want to compete in the conference moving forward.

Steve: Will the Orange set the tone for the rest of the season?

I’m not talking coming out, punching Clemson in the face and walking away back to NY (though that relative impossibility seems nice). I’m talking about the little things we see. Is Sean Tucker making early cuts and running strong? Are the receivers focusing on coming down with balls before they make their moves? Does the run defense look like it’s moving toward improvement? Is the secondary still ball-hawking?

How the Orange respond to last week, especially against daunting competition, will tell us a lot about where we are moving forward. It behooves me to think that they will respond in kind and we’ll see a team that isn’t throwing in the towel down in South Carolina. That said, if Syracuse is getting boat-raced, then look for this to turn into a development game for some of these skilled-position guys in the second half.

Andy: Does Rex Do something to keep the freshmen on the bench?

If you’ve watched the last couple LiveCasts, I’ve been a big proponent of keeping the freshmen QB on the bench until the offensive line is somewhat sorted out. However, after this Clemson games, the Orange plays a few games against more “struggling” ACC teams that pre-DeVito/Cisco injuries, could have been seen as wins. Rex looked fine against Liberty, showing why he’s not the starter, but was able to throw the ball down the field a bit better and finding receivers over the middle of the field. Clemson isn’t going to make anyone look good, but if Rex can use this challenge to show the staff he’s clearly the best option available, it will protect the young QBs in the long run from potentially suffering what DeVito went through in his first games as a starter.

This article was originally published at http://nunesmagician.com (an SB Nation blog). If you are interested in sharing your website's content with SCACCHoops.com, Contact Us.
Categories: Clemson, Football, Preview, Syracuse

Comments on Syracuse vs. Clemson preview: Five things to watch for