It’s always an uphill battle against Clemson, what can the Orange do to help their cause? 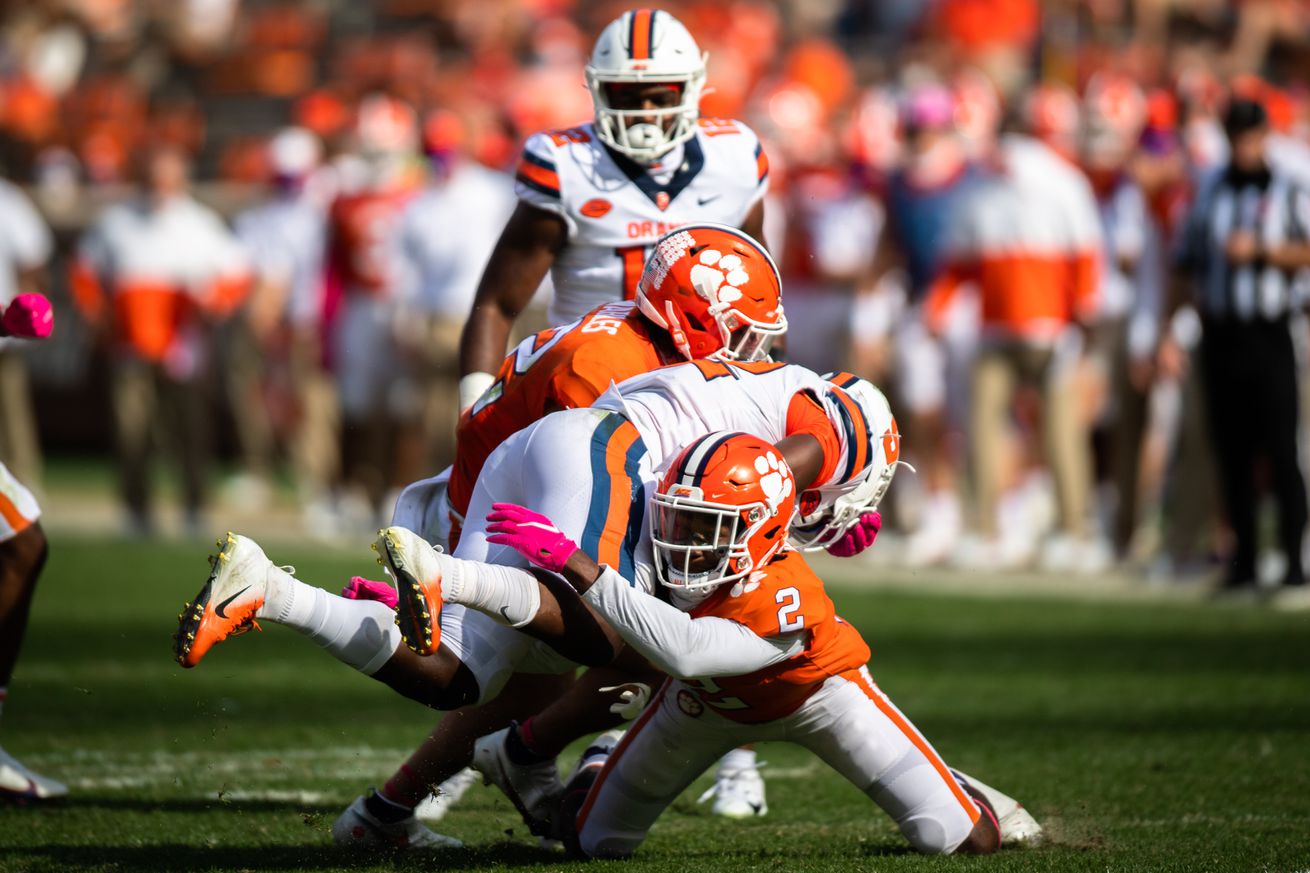 In what is still a wild and unpredictable year in the ACC, the Syracuse Orange football team had a third last second finish in a row this week, in overtime against Wake Forest. Now the team is back in action against a Clemson Tigers squad that seems to be living the ACC mantra this year, with a record of 3-2 (2-1). Stranger things have happened on a Friday night in October in Syracuse, like the 2017 upset of then-No. 4 Clemson.

Let’s take a look at a few things that could help make lightning strike twice...

Steve: Can the Orange win the interior line game?

You know I’m going to say it, but interior line play will be the key. Clemson is down two bonafide studs in Tyler Davis and Bryan Bresee, who have both had their time to shine against the Orange. With a similarly potentially banged up Syracuse line, the interior of whoever is playing guard-center-guard really needs to get a head on people and give a semblance of daylight for Sean Tucker to make a well-timed cut into for this game to go the way Orange fans want it to. The tackles will have their hands full, but the interior matchup will be where this bread is buttered.

John: Dealing with questions over the middle

While Syracuse’s secondary has played well this season, there have been some potential concerns here and there. Last week, Wake Forest used screens early to open up options downfield and it worked well as Sam Hartman completed four of five passes for 179 yards and two TDs (plus a pick) on passes traveling 20 or more yards in the middle of the field. Clemson has the speed on the outside to both make screens work and take the top off the defense later once Orange corners get closer to the line of scrimmage. I’ll be curious to see how Garrett Williams and Duce Chestnut respond.

Syracuse has been more explosive the last two weeks but in both games they had a red zone trip end without a touchdown. Might not seem like a terrible thing but when you lose by 3 each game that’s the difference between entering this game at 5-1. Garrett Shrader is 3-5 passing in the red zone for sixteen yards and no touchdowns. He’s scored 7 touchdowns on the ground but in 15 carries he’s gained 27 yards. Sean Tucker is averaging 4.8 yards per carry in the red zone. If Syracuse isn’t trying to punch it in from the one, it should be handing it to Tucker or using him to create a roll-out play-action toss for Shrader. Getting touchdowns instead of field goals will be important against a Clemson team relying on their defense to win games

Andy: Special Teams needs to at least be average

You don’t need to be an expert in advance stats to know that the Syracuse orange special teams unit has been poor this year. In case you were wondering both EPA and SP+ have the Orange in the hundreds when it comes to their normally top 25 special teams ranking. If the Orange are going to defeat a Clemson team with a stout defense, they cannot afford to give the struggling off Clemson offense any advantages with good field position. This will require the punching game to vastly improve, and Andre Szymt improving on the place kicking side wouldn’t hurt, either.

Steve already pointed up top the scary interior line for the Tigers. We’re probably expecting Syracuse’s offensive line to be overwhelmed early and often. That said, Syracuse has looked good this year on screen passes, getting Tucker free and over the middle of the field to let him work. Having Taj Harris would be nice, but Courtney Jackson and Devaughn Cooper could probably run those same McDonald bubble screens with some effect, especially with big guys like Damien Alford blocking. It plays into Shrader’s strengths as well, allowing him to settle in with short passes. I didn’t think I’d advocate for that style of offense again, but a little sprinkling here and there wouldn’t hurt the Orange.

This article was originally published at http://nunesmagician.com (an SB Nation blog). If you are interested in sharing your website's content with SCACCHoops.com, Contact Us.
Categories: Clemson, Football, Preview, Syracuse