The Orange are hot as of late, but can they keep it going against the Tigers? 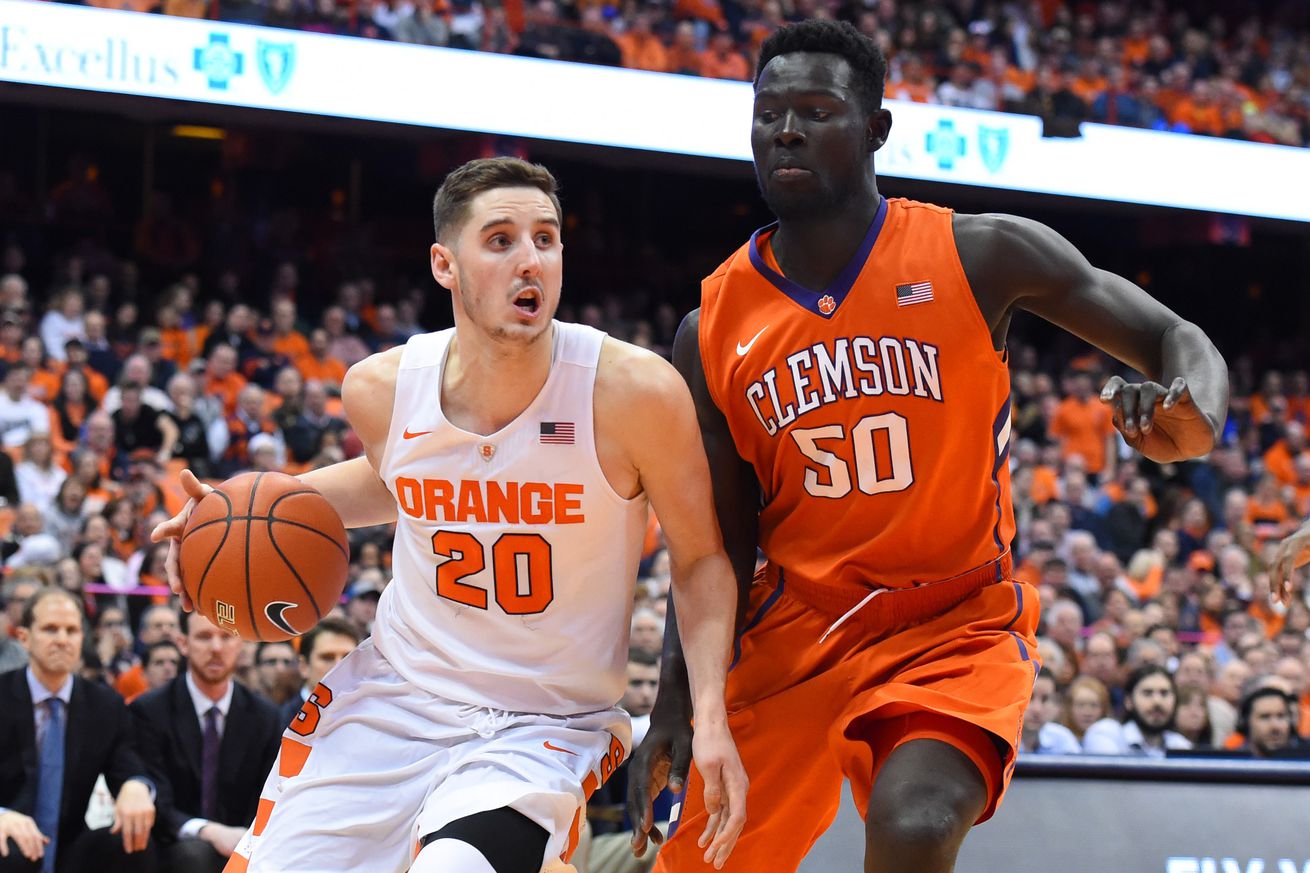 This has the look of a trap game for the Syracuse Orange (15-9, 7-4). If they truly want to turn this season around, a win against the Clemson Tigers isn’t up for debate — it’s a must-win. The Orange have done a great job in the last few weeks, winning games they weren’t supposed to. But winning the games they’re expected to (like this one) will be the mark of whether they can make a run to the NCAA Tournament.

Syracuse obviously comes in as the hotter team. The Orange have won four straight, and have recently shown a knack for coming from behind (erased second half deficits in their last three now). While Clemson was just blown out, 109-61, by Florida State on Sunday. They’re 3-7 in conference play, though they’ve managed to stay in most ACC contests this year.

While the Tigers don’t have a resume to to impress, any ACC win is worth it for Jim Boeheim’s squad. The Orange have had different players step up as of late, and they’ll need that on Tuesday night as the Orange look for only their second win on the road this season.

Who will make the headlines this time?

First it was Andrew White III who led the way against Florida State, then came John Gillon’s historic game against NC State. Saturday’s game against Virginia was dominated by freshman guard Tyus Battle who also had help from White’s hot hand. Who will it be this time around?

Tyler Lydon hasn’t exploded as of late, but his balanced play and efficient scoring has more than helped the Orange turn this season around. Everyone in Syracuse knows he controls the fate of this team, so why not take his turn with a star-like performance against Clemson?

How will Syracuse contain Jaron Blossomgame?

The 6-foot-7 senior forward has a versatile skillset, and is one of the conference’s top offensive weapons. Clemson’s leading scorer is averaging 17.7 points per game while tallying in a little under six rebounds too. He doesn’t have a lethal three-point shot as he’s shooting just under 27 percent from long range, but his leaping capabilities and scoring ability in the post are what helps Blossomgame dominate his opponents. The Tigers don’t have a balanced scoring attack, so containing Blossomgame will set the Orange up to come into Littlejohn Coliseum and take care of business.

What has happened to Taurean Thompson?

Coming into this season, the Orange were hyped up due their depth. The once nine-man rotation has turned into six- or seven-man unit that works to beat opponents from deep. Taurean Thompson is one of those seven who finds himself getting minutes, but as of late, his inefficient play has found him on the bench more often than on the floor.

The freshman big man is averaging 16 minutes per game in the Orange’s current four game win streak. He has lost most of his minutes to senior forward Tyler Roberson who is averaging a little over 22 minutes per game in that stretch. Having two quality forwards is something Boeheim is not complaining about, but for the Orange to continue this streak, it might be helpful for Thompson to find his hot hand once again.

This article was originally published at http://nunesmagician.com (an SB Nation blog). If you are interested in sharing your website's content with SCACCHoops.com, Contact Us.
Categories: Clemson, Florida State, NC State, Syracuse, Virginia