Syracuse 74, Richmond 71 (OT): Orange pull away in OT to sneak past Spiders - SCACCHoops.com

Syracuse 74, Richmond 71 (OT): Orange pull away in OT to sneak past Spiders 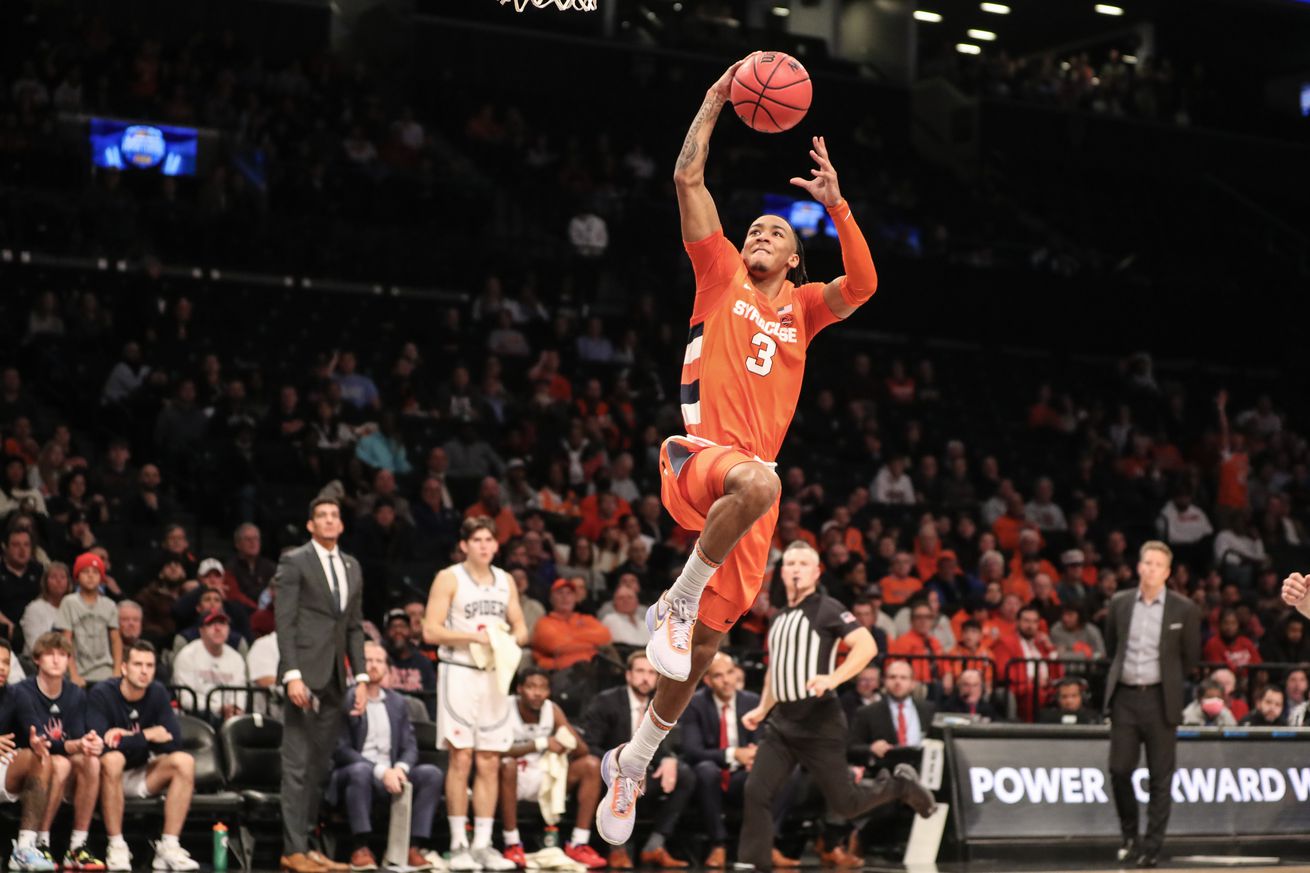 Cardiac Cuse never left you. It was always there, inside your heart.

The Syracuse Orange held a sizeable lead over the Richmond Spiders early in the first game of the Empire Classic. However, Syracuse’s zone let Richmond right back into the game as the Spiders hit open three after open three. Joe Girard tried to lead a heroic charge for the Orange, but it wasn’t enough to win the game in regulation. An overtime period saw Syracuse clamp down enough to win 74-71.

Syracuse started the game hot on both sides of the floor. The Orange zone prevented the ball from getting inside the arc, forcing the Spiders to shoot the long ball. While Richmond got plenty of open looks to start the game, the Spiders did not convert those chances. Syracuse’s offense got going early with some a couple early three makes and transition layups. Richmond’s full court press didn’t seem to faze the Orange at all.

Another big reason for the Orange success early on was the zone forcing turnovers, something the defense sorely missed early on this season. However, after an early Richmond timeout, the Spiders tighten up their play and gave Syracuse a taste of its own medicine. The Orange started getting sloppy with the ball and gave Richmond transition buckets in unsettled situations, leading to an 11-4 Richmond run after the early timeout.

Syracuse barely managed to stay ahead thanks to the sharpshooting of Joe Girard. The veteran guard starting making shots all over the floor, even inside the arc where he’s been traditionally weaker. He finished the first half with 21 of Syracuse’s 34 points, shooting 9-13 from the floor. But an 18-11 rebounding advantage kept the Spiders within range at half, only trailing by five.

The Spider came out firing in the second half, nailing their first three shots from beyond the arc to grab their first lead of the game. Syracuse meanwhile struggled to keep up as the Orange reverted back to isolation ball with the guards. Girard and Mintz couldn’t quite keep up the scoring as Syracuse fell behind.

Then the teams continued to trade blows in the second half as the shooting continued to ramp up. Richmond continued to hit open threes while a combination of players from Chris Bell and Judah Mintz kept pace for the Orange. More importantly, Jesse Edwards stayed in the game as well after he missed most of the first half with two fouls.

However, Richmond’s three point shooter continued to pace the Spiders and give them enough of an advantage over the Orange. The Spiders pulled out two-possession leads with open threes as the zone rotations continued to be slow and lackluster. Couple that with Richmond’s massive rebound advantage and the Spiders slowly started to seize control in the second half.

Something that kept the Spiders ahead as well was Jesse Edwards’ notably quiet night. Edwards only had four field goal attempts heading into the final media timeout. The Orange center played the entire second half after his two early fouls in the first half but still didn’t get used as much. The Orange guards continued to force shots as after Girard’s hot start, he went could from three.

Then the defenses held strong as both teams couldn’t pull away, forcing overtime. That’s where Judah Mintz started to grow into the game. He struggled mightily in regulation, going only 5-13 from the field, but gave the Orange a spark with his dribble-drive moves that he showed off in the Northeastern game. That offensive spark was all Syracuse needed to pull away from Richmond.

Syracuse now awaits the winner of Temple-St. John’s, who they’ll play tomorrow in the final of the Empire Classic back in the Barclays Center.