Ranking the 5 best Running Backs in the ACC for 2020 - SCACCHoops.com

Ranking the 5 best Running Backs in the ACC for 2020

Well here we go. It’s time to start ranking the best players in the ACC for the 2020 season. As usual we hope you enjoy the rankings. 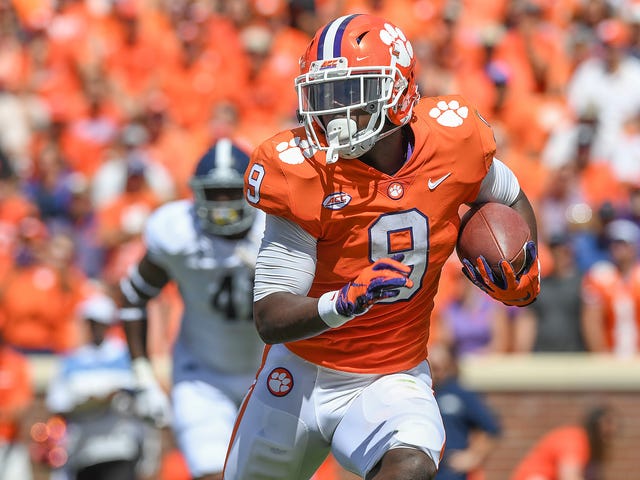 Travis Etienne was the ACC’s number one running back in 2019, and he is again going into the 2020 season. To the surprise of many he returned to Clemson for his senior year. He ran for 1,614 yards for an outstanding near 8 yards per carry. He also had over 400 yards receiving.

He enters 2020 as arguably the best running back in all of college football, and is a near certain 1st round NFL pick.

Clemson isn’t the only school with a top 5 ACC QB and RB. Louisville also finds itself with both, as well as North Carolina. Louisville RB Javian Hawkins had a tremendous freshman season rushing for over 1,500 yards for a nearly 6 yards per carry average with 9 TDs.

Hawkins had 100+ rushing yards games against the likes of Notre Dame and Clemson, and was second team All-ACC in 2019. He could push for higher honors in 2020.

Michael Carter had a rock solid 2019 Junior season. He had a 1,000 yard season, and ran for 5.7 yards per carry. He showed his versatility by also catching 21 passes.

Along with Javonte Williams, Carter and Williams form what may be the best RB 1-2 punch in the ACC. He’s been projected anywhere from the 4th to 6th round of next year’s NFL Draft, and could go higher with a strong 2020 season.

Behind a brand new offense under transition from the triple option, Georgia Tech’s offense struggled mightily in 2019 especially in the 1st half of the season. The one constant of the Georgia Tech offense was Jordan Mason. Mason had 899 yards rushing for 5.2 yards per carry average.

He’s as hard to bring down as any back in the ACC.

Playing behind AJ Dillon, David Bailey still had 844 yards on the ground with a near 6 yards per carry average in an honorable mention All-ACC season. A physical back Bailey looks to have a breakout 2020 season, as he takes over the lead back role at Boston College from Dillon.

I could easily see Bailey have a over 1,200 yards rushing this upcoming season.

This article was originally published at http://www.AllSportsDiscussion.com. If you are interested in sharing your website's content with SCACCHoops.com, Contact Us.
Categories: Boston College, Clemson, Football, Georgia Tech, Louisville, Notre Dame