Pitt falls apart in second half, lose 91-60 against Michigan - SCACCHoops.com

Pitt falls apart in second half, lose 91-60 against Michigan 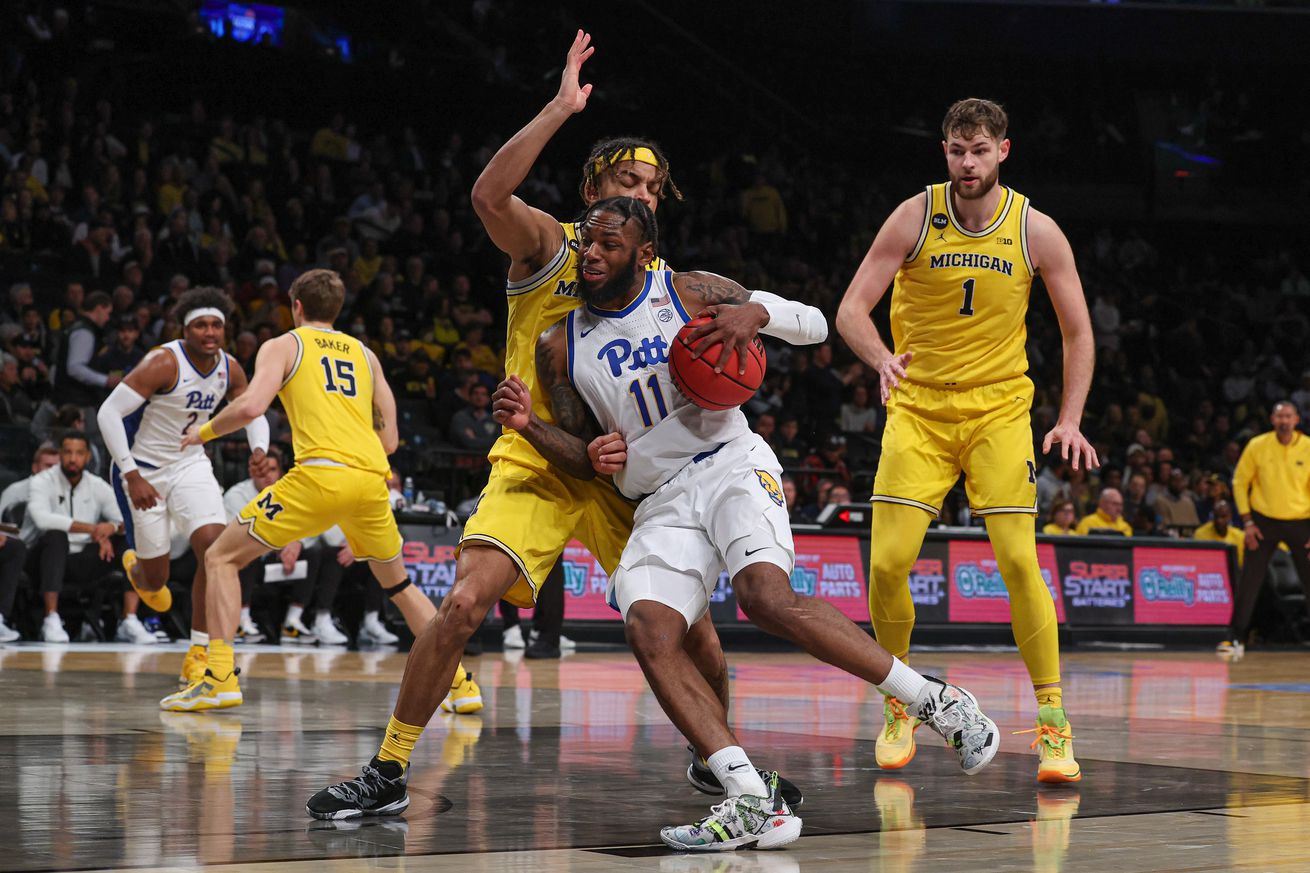 New York - The good vibes around the Pittsburgh Panthers after the UT Martin win and the recruiting class seem to have all but evaporated after yet another blowout loss. The Panthers again lost control in the second half in route to a blowout loss to the Michigan Wolverines. This drops the Panthers to 1-2 on the season.

The Panthers tipped off with a starting lineup of Nelly Cummings, Greg Elliot, Jamarius Burton, Blake Hinson, and John Hugley IV. Pittsburgh came out aggressive early lead by Burton to a 15-11 lead at the first break. John Hugley had his first welcome-back moment with a three-pointer. After a fast Panthers start Michigan was able to get what they wanted offensively when the Panthers started to cool off. Jett Howard was consistently able to attack the basket to lead the Wolverines with 10 points while Hunter Dickinson added another 8 points with 6 rebounds and 4 assists. The Panthers consistently sent double teams Dickinson’s way but the Wolverines were cold from three only shooting 2-11 from deep. Jamarius Burton lead the Panthers at the break with 8 points while Blake Hinson who was the star of the first game struggled with 5 points on 2-6 shooting. Hinson also got hit with a technical foul after a pretty obvious flop. The Panthers hung in to keep it close at the half 38-32.

The Wolverines shooting woes didn’t carry over into the second half and the Panthers fell behind by double digits fairly quickly. The three-point shots started to fall and the Panthers had to switch out of the zone defense that they had moved to in an attempt to slow down Michigan from attacking the basket. On the half, the Wolverines went 7-9 from three and shot 72% from the floor as it didn’t matter man or zone Michigan was able to have success. Wolverines guard Dug McDaniel stated post-game how the Wolverines noticed that the Panthers were fatigued and continued to attack from there. The Panthers could not get anything going on either end of the floor committing multiple turnovers and allowing easy baskets for the Wolverines. The Panthers in the second half collapse had 7 turnovers and committed 10 fouls. Pitt had gone cold in the second half from all levels but especially from three shooting only 25% from deep. The Panthers limped their was to a 91-60 blowout loss in the Barclays Center.

The Panthers don’t seem any closer to turning the corner after these last two games. The Panthers were thoroughly outplayed tonight even with the foul troubles and poor shooting Michigan had to start the game. The Panthers are giving less resistance to the two programs that they played than the mid-major teams did. For a program that many thought would look like they would take a step in the right direction, it’s been anything but that. Post-game head coach Jeff Capel said that he was still figuring this team out and the communication is still not where it needs to be. The Panthers have to get these things figured out before ACC play to have a chance this season.

The defense is a long way away at this point. I know with so many new pieces that communication on the defensive end takes time, but Michigan was able to get whatever they wanted especially in the second half. The Panthers often looked lost which allowed the Wolverines to get to the basket with ease in man defense and in zone defense was able to find a lot of open looks for three.

There was hope this season that the Panthers would be able to have more success from the three-point range this season but so far that has not happened. The Panthers have now shot below 27% from three in all three games this season. It’s a worrying trend for the Panthers who were hoping this new-look offense could provide more support for John Hugley inside.

John Hugley had a noticeable limp in the second half of the game but was able to return.

Nelly Cummings limped off to the locker room in the second half and did not return.

Jamarius Burton led the team in scoring with 14 and added 5 rebounds and two assists.

Blake Hinson added 13 points with six rebounds. Hinson also led the team in turnovers with four and had four fouls for the game.

John Hugley had 9 points and one rebound in 22 minutes of action tonight.

Pitt will get the loser of the VCU - Arizona State game tomorrow evening.

This article was originally published at http://cardiachill.com (an SB Nation blog). If you are interested in sharing your website's content with SCACCHoops.com, Contact Us.
Categories: Basketball, Pittsburgh, Recap