Syracuse surrendered a 14-point halftime lead to fall to .500 on the season. 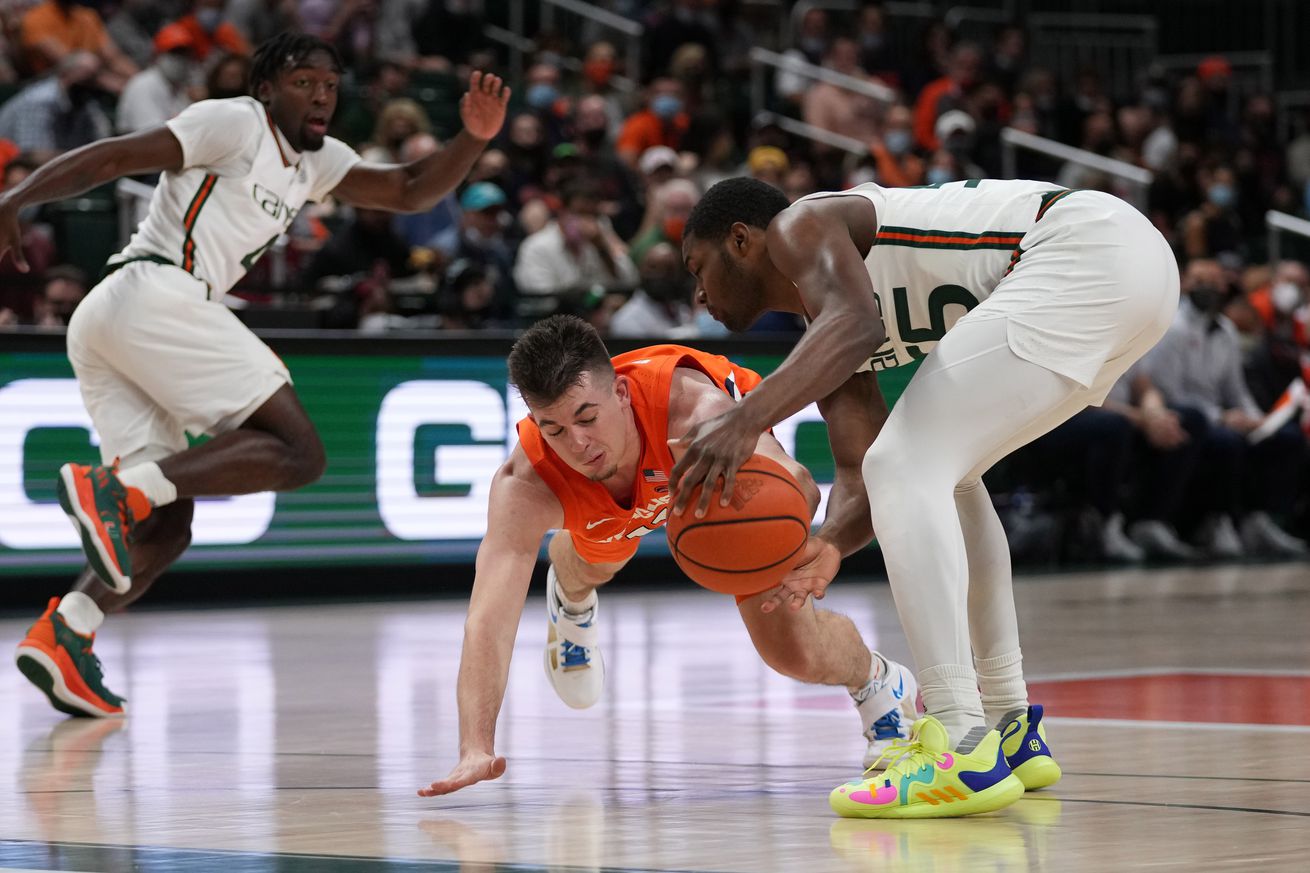 CORAL GABLES, Fla. — The Syracuse Orange men’s basketball team jumped out to a 14-point halftime lead over the Miami Hurricanes but ultimately collapsed in the second half to fall by a final score of 88-87 inside the Watsco Center on Wednesday night. With the loss, Syracuse moved to 7-7 on the season and 1-2 in league play.

Edwards scored twice out of the gate with two dunks until Jimmy could follow it with a triple. Miami’s Charlie Moore answered with two deep 3s but Girard made a triple to give Syracuse a 10-8 lead. The Orange wouldn’t look back the rest of the half.

Edwards and the older Boeheim brother scored inside and Cole Swider hit a three to give Syracuse a 17-13 lead at the second media timeout. Edwards dominated the first half in particular by inside scoring and being a factor on defense. He blocked five shots in the first half, including an emphatic swat of a corner three that landed behind the Syracuse bench and his teammates stood up and high-fived the big man.

Later in the half, Benny Williams scored on his first 3-pointer of the season. Girard then made another from outside to lift Syracuse to a 28-15 lead at the 6:28 mark.

Symir Torrence entered after the timeout and got a deflection on his first play, a steal, which lead to a Girard three to boost the lead to 31-15. It took until the 1:54 mark, but Buddy scored first points of the game on a left-wing three.

Out of the half, Buddy Boeheim was whistled for his second offensive foul of the game going for a rebound and Sam Waardenburg hit a three on the other end for Miami. Charlie Moore then copied that effort to whittle Syracuse’s 14-point lead down to just eight, forcing Jim Boeheim to call timeout just 88 seconds into the second half.

It was all downhill from there.

Miami went to a full court press and Syracuse had three turnovers before the first media timeout as the Hurricanes whittled Syracuse’s 14 point halftime lead to just three by the 16-minute mark.

After Kam McGusty scored inside and Girard split a pair of free throws, Moore hit a three to give Miami a 48-47 lead, its first since early in the game. Swider responded with a triple to give the lead back to Syracuse as Jim Boeheim went with a three guard look to combat the Miami press, inserting Torrence in favor of the older Boeheim brother.

Edwards continued his dominance in the paint, scoring on back to back dunks but the zone was diced up as Syracuse trailed 56-55 at the second media timeout.

Isaiah Wong scored for the first time of the game at the 10:41 mark. He scored again on the next play as he drew Edwards’ second foul on an and-1. Back to back Girard 3s made it a four point game, but Syracuse couldn’t quite get stops needed to put together a run.

Both teams traded buckets down the stretch and a Buddy 3-pointer made it 67-64 with 5:30 left. Edwards made a pair of free throws to get it to 71-69 with 3:30 to play. But a Jordan Miller dunk off an alley-oop from Moore on the next possession took any momentum away and Buddy fouled shortly thereafter at the 1:32 mark.

A Swider three made it a one possession game with 88 seconds remaining, but Edwards fouled out with 46 seconds left after a quick exchange. Swider made a pair of 3s late to make the loss appear closer, but ultimately Syracuse came up short after failing to protect its 14-point lead at the half.

Syracuse will head to Winston-Salem to take on Wake Forest this Saturday. That game tips at 2 p.m. and will stream on ACCNX.

This article was originally published at http://nunesmagician.com (an SB Nation blog). If you are interested in sharing your website's content with SCACCHoops.com, Contact Us.
Categories: Basketball, Miami, Recap, Syracuse, Video