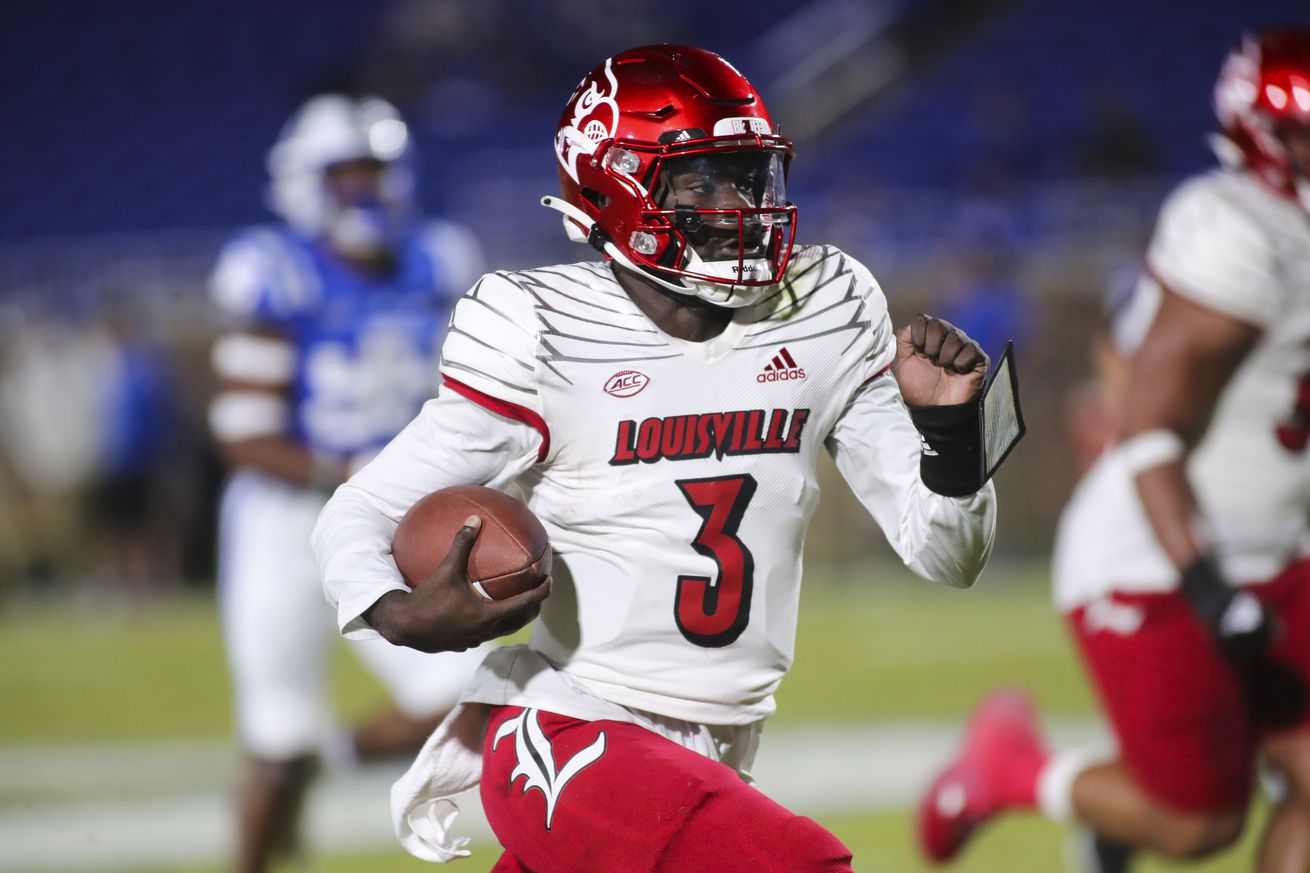 That is the story.

Malik Cunningham becomes the first player in school history to throw for 300 yards and run for 200 yards in the same game.

Malik Cunningham is only the second Louisville player to be responsible for 7 touchdowns in a game.

Number of games responsible for at least 7 touchdowns:

What we just saw was one of the best performances we’ve ever seen from a Louisville Cardinal quarterback. And that’s saying an awful lot.

Oh. And this happened.

But Malik didn’t do it on his own. We saw some exciting flashes from Amari Huggins-Bruce, who appears to be a star in the making, as well as many others like Cooley and Harrell. The offense was dominant all night long, and it was exactly the type of performance we expected from them after last week’s against Syracuse.

Louisville is averaging 11.6 yards per play. Most since Syracuse in 2017. No other game that high on https://t.co/WYOfhMTORf

The coaching staff deserves credit for calling a clever game on offense and exposing all of Duke’s weak spots. My favorite example of this was the wide open play action pass early in the game to Marshon Ford.

Marshon Ford was left wide open & he gets an easy TD reception. Louisville has an early double digit lead.

That was just some vintage Satterfield play calling that we’ve been missing at times this year, but got to see plenty of it tonight. Let’s keep that going.

There was just so much to enjoy from this offense, even after most of the starters were benched for the remainder of the 4th quarter. We got to see young running backs Jawhar Jordan and Aiden Robbins show what Louisville has in store for the future. The defense also got some much needed rest and young guys get much needed reps for the second week in a row.

The only thing that was of any concern this evening was Louisville’s defense allowing short chunk plays. When Louisville wasn’t forcing 3 and outs or turnovers, they were allowing a few too many dink and dunk passes to Holmberg and allowed backup QB Leonard to stretch his legs a little. Obviously scoring quickly is something that puts stress on the defense, but while UK’s QB Will Levi doesn’t have an accurate deep ball, he’s more than capable of completing the same passes Duke made all night and he can make a few guys miss on the run.

I don’t want to give the defense too much grief as they played a lot of minutes tonight, but they do need to clean things up if they want to limit what UK does best.

But I digress. Let’s focus on celebrating an absolute beat down and a record-setting night for the offense.

One of my favorite things about this game is that the buzz for next season has already started. We knew that if Louisville made a bowl game that national pundits would start talking about what the Cards have returning next season and that’s exactly what started tonight. If the Cardinals are able to win a bowl game or knock of UK next week then expect the noise this offseason to be pretty loud, especially if Malik returns.

With all of that said, let’s look at some of the tweets that told the story tonight. Kick your feet, enjoy a careless weekend of football, and start making plans for rivalry weekend and bowl season.

YOU KNOW WHAT TIME IT IS https://t.co/610oOYQkrn

Malik looking back, realizing it was a lineman who was chasing him, and then clearly making the educated decision to keep the run going is the best moment of the year since the UCF interception return.

Malik Cunningham is the 2nd player in FBS history to have 300+ pass yards and 200+ rush yards in a game.

He joins Marques Tuiasosopo, who did so in 1999 against Stanford. pic.twitter.com/fhz3BEVFNX

You assholes got to my sweet mother pic.twitter.com/VcDlEethzR

But in all seriousness, there’s only one way to end this post:

This article was originally published at http://www.CardChronicle.com (an SB Nation blog). If you are interested in sharing your website's content with SCACCHoops.com, Contact Us.
Categories: Duke, Football, Louisville, Recap, Video