U of L has won 14 straight games against the Hokies. 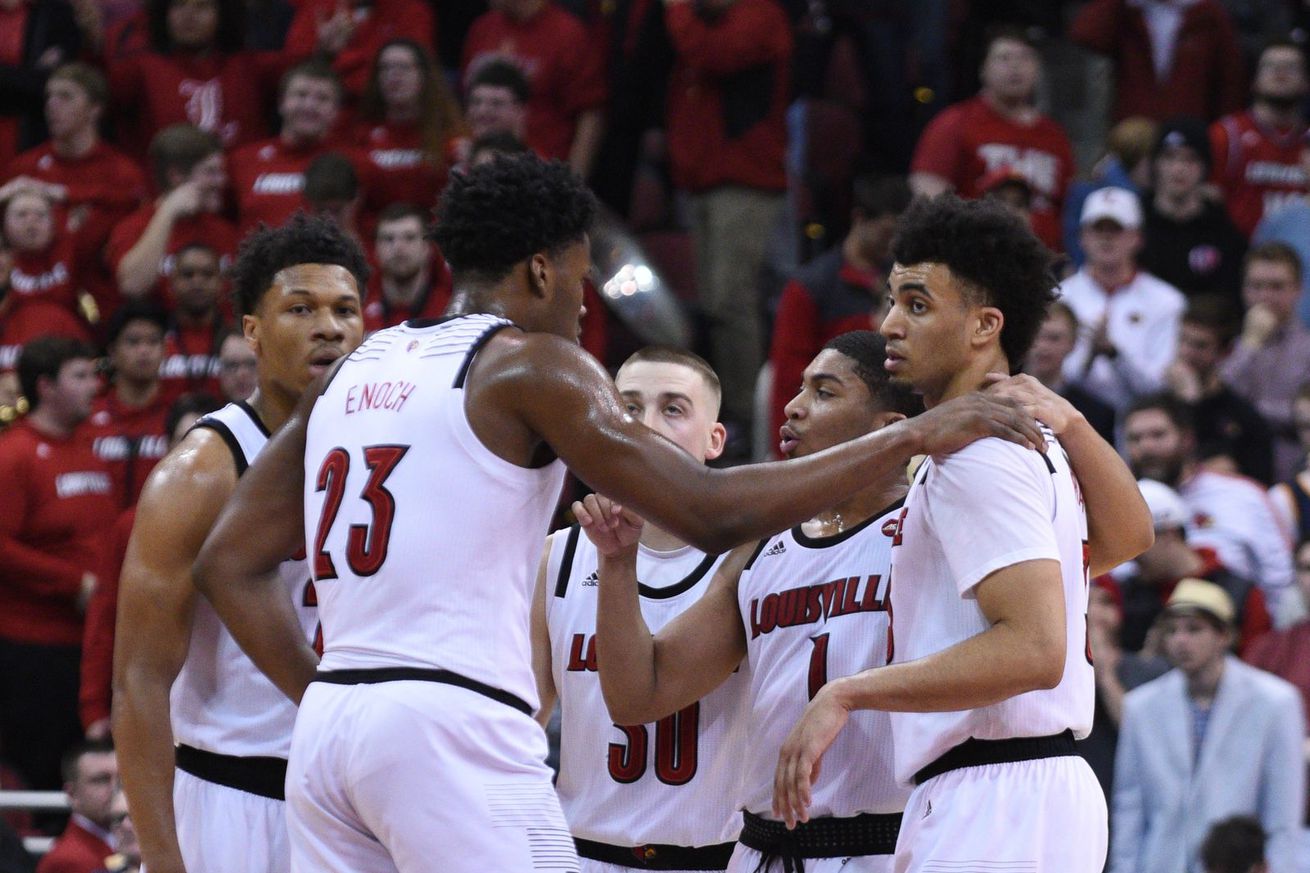 Typically known more for its offense, Virginia Tech is coming off a historic performance over the weekend in which it went to Raleigh and held a nationally-ranked NC State team to just 24 points. The 24 points by the Wolfpack marked the lowest scoring output by a ranked team since the introduction of the shot clock in 1985. For Virginia Tech, it was the Hokies’ lowest scoring output of the season by 15 points ... and they still defeated a ranked team on the road by 23.

Winners of three straight, Virginia Tech enters Monday night with the same 7-2 ACC record that Louisville owns. The Hokies’ only two conference defeats came in decisive fashion on the road against No. 3 Virginia (81-59) and No. 8 North Carolina (103-82).

Virginia Tech is one of the best offensive teams in the country, currently ranking No. 4 in Division-I in effective field goal percentage, No. 3 in three-point percentage, and No. 7 overall in adjusted offensive efficiency. The Hokies have scored 80 or more points in 12 of their 21 games this season.

Nickeil Alexander-Walker, a first cousin of former Kentucky point guard Shai Gilgeous-Alexander, has been Virginia Tech’s top performer this season. The sophomore guard from Toronto is averaging 17.6 ppg, and has scored 19 points or more on 12 occasions. He’s also the Hokies’ most dangerous defender, ranking 26th in the country in steals per game and 29th in steal percentage.

Louisville could catch a break on Monday as senior point guard Justin Robinson is expected to miss a second straight game with an undisclosed injury. He’s the team’s second-leading scorer at 14.4 ppg, ranks 44th nationally in assists per game (5.4), and is one of 10 finalists for the Bob Cousy Award, which is given out annually to the best point guard in college basketball. Robinson was Virginia Tech’s leading scorer in both games against Louisville last season, scoring 23 points in the first meeting and 16 in the second. He’s also the school’s all-time leader in assists.

Assuming Robinson won’t play, expect Buzz Williams to utilize a six-man rotation with freshman guard Isaiah Wilkins (4.9 ppg) seeing solid minutes off the bench and fellow freshman reserve Jonathan Kabongo (1.5 ppg) only playing if the situation demands it. Outside of that, Williams will compensate for the absence of Robinson and reserve P.J. Horne (who has been out for three weeks with another “unspecified injury”) by playing at an even slower pace than usual (327th in pace) and riding his starters. In the win over NC State, three VT starters — Alexander-Walker, Ahmed Hill (13.4 ppg) and Wabissa Bede (3.7 ppg) — played all 40 minutes. Louisville being able to get any Virginia Tech starter in foul trouble would be a sizable accomplishment.

—Louisville has won 14 straight games against Virginia Tech, which is tied for the Cardinals’ longest active winning streak. U of L has also beaten Eastern Kentucky 14 straight times.

—Louisville is 31-6 all-time against Virginia Tech in conference games, including a 5-0 mark against the Hokies in ACC games.

—Jordan Nwora is the second-most improved scorer in the nation with his 17.9 ppg scoring average (fifth in the ACC) up 12.2 ppg from his 5.7 average last year.

—Virginia Tech is 0-5 against Louisville under head coach Buzz Williams, and 0-5 against the Cardinals in ACC games.

—Opponents are scoring 43.2 percent of their points against Virginia Tech from behind the three-point line, the highest percentage allowed of any team in the country. The Hokies are allowing juts 41.9 percent of their opponents’ points to come from inside the arc (343rd) and only 14.9 percent from the free-throw line (330th).

—Louisville’s 7-2 record in ACC games matches its best nine-game start in its five years in the league.

—Virginia Tech is holding a “Black Out” for this game, encouraging fans attending to wear black.

—Louisville is 15-3 all-time against Virginia Tech in games played in Blacksburg.

—Virginia Tech is 2-1 all-time in “Big Monday” games, but 0-1 this season. They fell at North Carolina three weeks ago in a Monday night game.

—Louisville is 9-2 all-time in games against Buzz Williams. The Cards were 5-2 against Williams during his time as the head coach of Marquette.

—Louisville is 3-3 in games against top 25 opponents so far this season.

—Virginia Tech is 2-2 in games against top 25 opponents so far this season.

—Virginia Tech is 11-0 at home this season. The Hokies’ last loss inside Cassell Coliseum came last season against Louisville.

—Louisville is 15-0 this season when shooting a better percentage from the field than its opponent.

—Louisville is one of just four schools which have won 20 or more games on the court in each of the last 16 seasons (also Kansas, Duke and Gonzaga).

This article was originally published at http://www.CardChronicle.com (an SB Nation blog). If you are interested in sharing your website's content with SCACCHoops.com, Contact Us.
Categories: Basketball, Louisville, Preview, Video, Virginia Tech