Can't find an ACC Spring Game (except FSU) on ESPN's TV Networks? Neither can we! - SCACCHoops.com

Can't find an ACC Spring Game (except FSU) on ESPN's TV Networks? Neither can we!

So this past Saturday, the defending national champion Clemson Tigers held their spring game. If you were looking on ESPN’s family of television networks you couldn’t find it anywhere. If you’re looking for the game later in the week as a replay you won’t find it anywhere there either. In fact, not a single ACC spring game is anywhere on television except Florida State who were fortunate to have their game on ESPN yesterday. If I want to watch an SEC spring game, though I can find it. Here is a screen shot of ESPN Family of TV networks schedule on April 10. 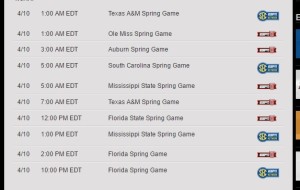 The SEC Network I get, but games showing up on ESPNU too? You know what was on ESPNU at the same time yesterday as Clemson’s Spring Game? How about 8-5 Texas A&M. Sure that makes sense.

Is this more of the alleged SEC Bias by ESPN or is something more reasonable at play? If we’re talking about Clemson/Texas A&M, that certainly seems odd. Clemson missed the 2 PM start time by 30 minutes. Why choose the Aggies over the defending national champs?

Regarding the rest, maybe the spring games on aren’t somehow portable between digital and television content. Well through WatchESPN, I can watch any of the previous SEC Spring Games. That doesn’t seem to be it.

So why aren’t any of of the ACC Spring Games somewhere at the very least on ESPNU? Despite the conference’s recent football gains, it still seems to play second fiddle in ESPN’s football coverage priority list. It will be interesting to see if this changes when the ACC’s linear television is launched in 2 years.

If you want to watch any non FSU ACC Spring game, your only shot is through ESPN’s ACC Digital channel ACC Network Extra. Here is a listing of how to view many of the spring games from fbsschedules.com.