Arkansas slams its way to 80-54 rout of Louisville in Maui - SCACCHoops.com

The Razorbacks finished with more dunks than Louisville had made shots. 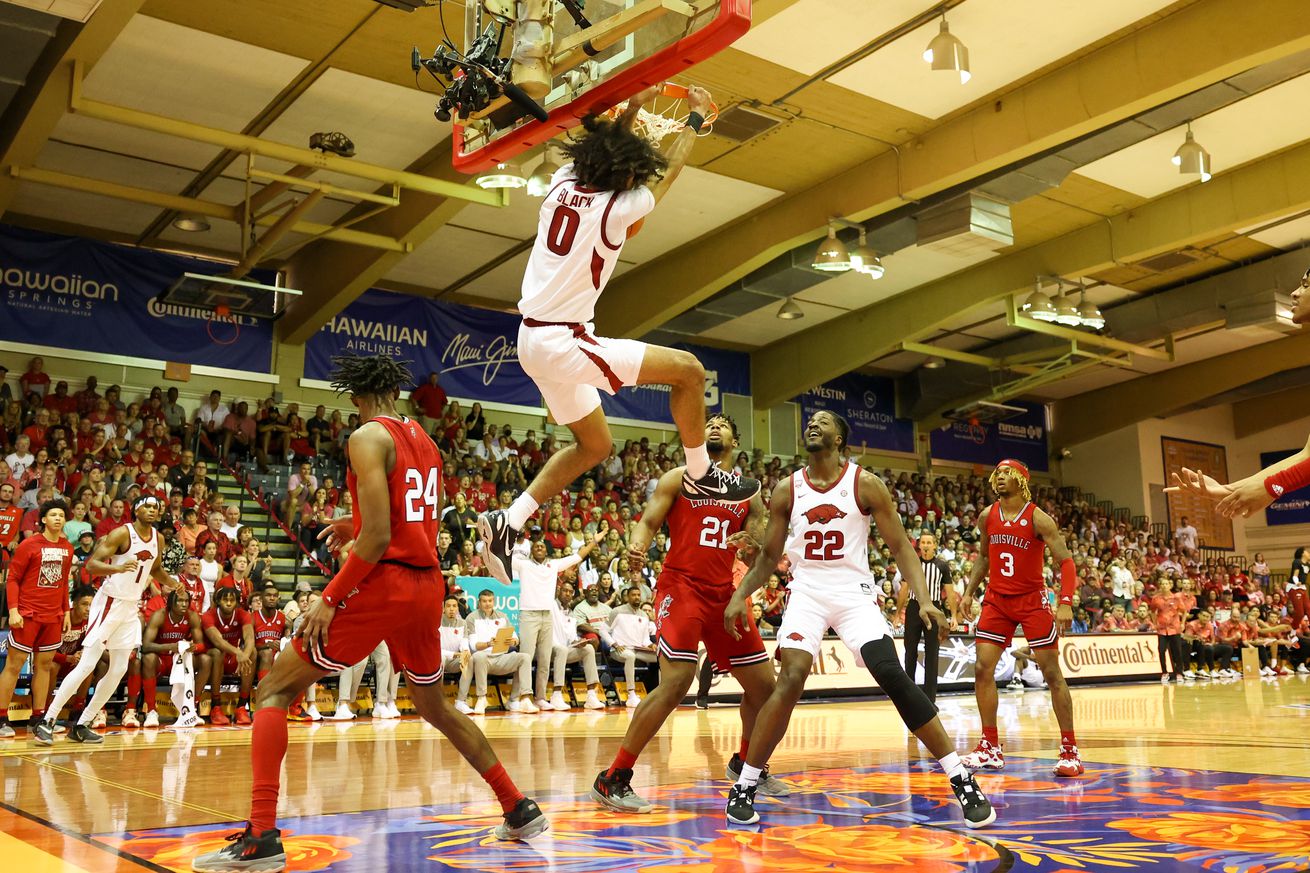 For 30 minutes on Monday, Louisville played the type of game and gave the level of effort that its fan base has been clamoring for since the season began 12 days ago.

Then, the wheels came off.

No. 9 Arkansas went on a 24-4 run fueled by Louisville turnovers and Razorback dunks on the other end to turn a 5-point advantage into an 80-54 rout in the quarterfinals of the Maui Invitational. Of the Hogs’ 29 made field goals, 18 of them came on layups or dunks.

The loss sends Louisville into the tournament’s consolation bracket, where they’ll face No. 21 Texas Tech Tuesday afternoon at 2:30 on ESPN2. The Red Raiders fell to No. 10 Creighton, 76-65, in Monday’s opening quarterfinal.

Louisville found success on the defensive end early in Monday’s contest by forcing the the super athletic Razorbacks into launching a flurry of shots from the outside. Arkansas responded by misfiring on seven of their first nine three-point attempts, allowing U of L to stay within striking distance despite their own offensive struggles.

Anthony Black then turned the game on its side. The freshman guard took full advantage of Louisville’s defensive approach, burying 9-of-11 shots including 3-of-5 from beyond the arc on his way to a game-high 26 points. He also chipped in six assists.

For the Cardinals, turnover issues were once again the main culprit for their offensive woes. Louisville turned the ball over a whopping 22 times, and finished with only four assists on 16 made shots (yes, Arkansas had more layups/dunks than Louisville had made field goals). For the season, U of L now has 72 turnovers against 31 assists.

Freshman Kamari Lands, who entered the afternoon without a made field goal, came off the bench to lead the Cards in scoring with 13 points. El Ellis was the team’s only double-figure scorer with 11, but it took him 16 shots to get there. Ellis also turned the ball over seven times.

The effort was much, much better for the 3/4 of this game, but unfortunately when things started to go a little sideways, this group allowed the game to get completely out of hand. The first step to fixing that is to come out tomorrow afternoon and play with every bit of the effort we saw in the first half against the Hogs.

On to Texas Tech.