ACC is struggling for consistency as its teams flounder - SCACCHoops.com

ACC is struggling for consistency as its teams flounder

Syracuse is not the only team struggling in the ACC. North Carolina fans are losing their minds too. Boston College is near the top of the standings. Is this much parity a good thing, or a signal of needed NCAA change? 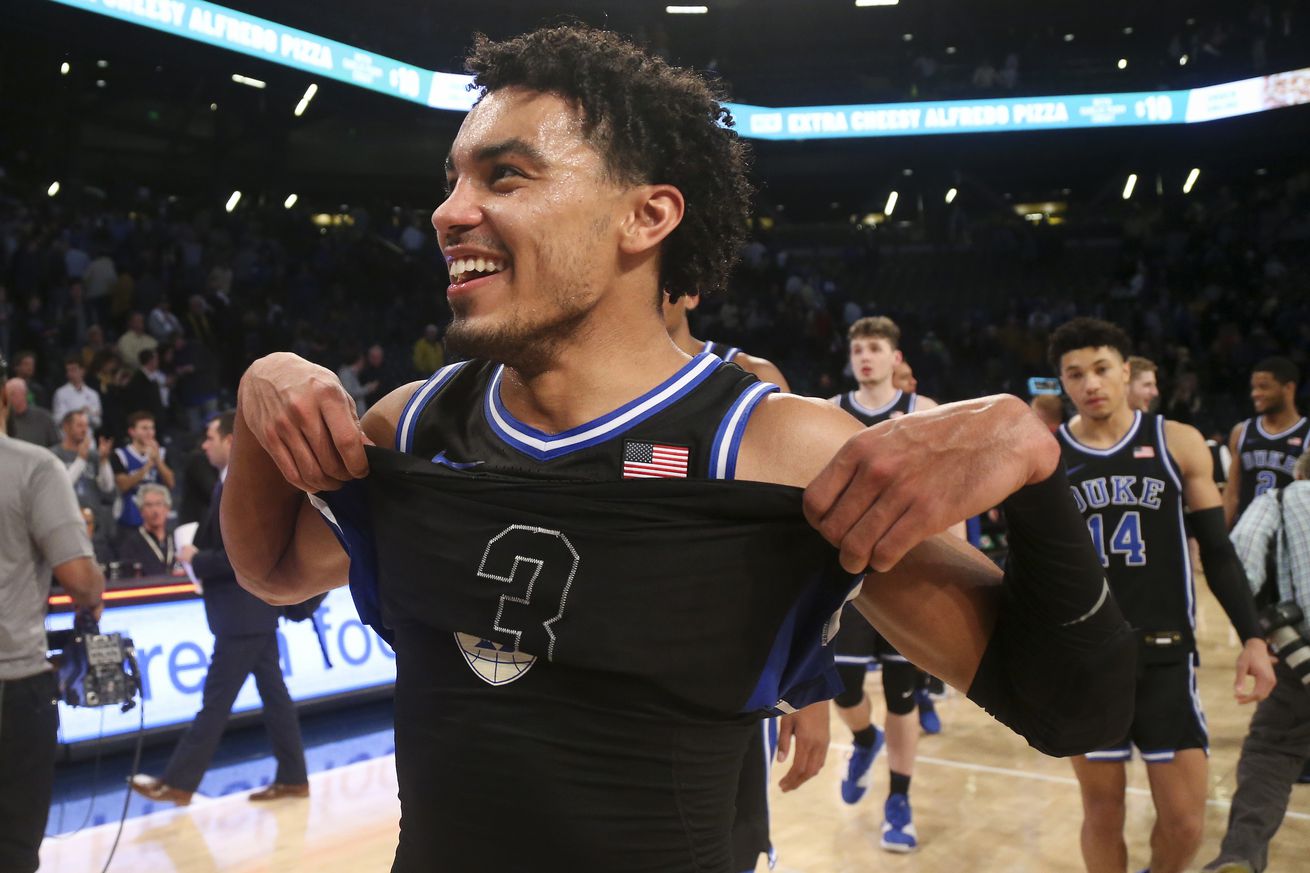 The Georgia Tech Yellow Jackets potentially beat the No. 2 Duke Blue Devils on Wednesday night if Michael Devoe had converted a wide open fast-break three after James Banks III stuffed Cassius Stanley at the rim with 2:48 remaining. Tre Jones converted a key floater in the lane right after, pushing Duke ahead 68-64 before Tech missed eight straight shots to close a narrow loss.

Georgia Tech’s amorphous defense presents challenges for younger teams like Duke, as the Wreck overcame a 40-29 deficit at halftime by forcing three turnovers to take a lead into the later stages. It’s still Duke, sitting atop the league based on strong recruiting classes. Other younger teams haven’t withstood roster turnover, leading to an ACC where everybody’s beating everyone. As it looks — everyone’s either bad or inconsistent (Duke slides for now).

Boston College topped Virginia on Tuesday. The Eagles are 3-1 in conference despite sitting in the basement with a 131st-ranked KenPom differential. Virginia’s 35th, but held a surprisingly potent Virginia Tech offense to 39 points last week. Then Virginia Tech lit up Syracuse late at the Dome, where the Orange lost twice as favorites to them and Notre Dame. The Irish couldn’t withstand BC at home. Florida State topped Louisville. Clemson upset NC State.

If you think it’s bad in Central New York, everyone’s beating North Carolina. College basketball’s brand is the upset. It’s also the only identity the ACC has this year. Maybe they aren’t even upsets. None of these teams seem to have any clue who they are.

“It’s early,” said Kevin Keatts on Monday, NC State’s head coach. “So I couldn’t really tell you if it feels a little different because I haven’t had a chance to play everybody. I think that’s a better question for me once we get halfway through the league ... our first year we started off 0-2 and we found a way to win 11 games and go 11-7, then last year we opened up with a win at Miami. So it’s so early, but I will say this: when you look around college basketball, I think there’s more parity.”

The tumultuous ACC does reflect a larger NCAA phenomenon. The AP crowned a record six different teams at No. 1 through Christmas, compared to three last year. San Diego State and Auburn are the only undefeated teams left. Duke lost to Stephen F. Austin, Kentucky to Evansville and Michigan (now 10-4) pummeled Gonzaga.

Bill Self, who’s thriving aside from a stumble against Villanova, told Jeff Goodman the weird year is due to fewer good players remaining in the game. An influx of freshman are taking the place of those declaring for the NBA, with the standard of declaration diminishing each year as the system allows players to veer closer to the pros and gain feedback.

“There’s a lot more parity in college basketball,” Danny Manning, Wake Forest’s coach, said. “I think a lot of it is the experience factor. There’s some teams that have experience and some teams don’t have as much experience, but there’s more teams in similar categories.”

Seth Greenberg dubbed the problem “bad advice” while speaking on the status of the game on ESPN, referencing Tyus Battle and Oshae Brissett’s Syracuse departures. Perhaps Battle misstepped staying for the 2018-19 season. He also had an education ambition he wanted to achieve.

Brissett entered the draft without much prospect of getting picked. He fought in Summer League with the Clippers, won a two-way spot with the Raptors and is now playing regular minutes for his banged-up hometown squad. It’s hard to argue against that bet.

“Even some of the mid-major teams are better because they’ve got older guys,” Keatts said. “When I look around college basketball, we certainly have some good players in college basketball and the ACC, but I don’t know that we’ve got the dominant guys.”

That’s no new trend. The ACC and NCAA should be shaking over Australia and New Zealand. LaMelo Ball and RJ Hampton opted for a year of pay amongst the kangaroos and koalas (while we’re here: please donate to fire relief in Australia) over college. College, in turn, refused to adapt even after the wakeup call of FBI investigations in 2018.

James Wiseman’s effective ousting from Memphis further hurt this season. Maybe he stays if he gets a sponsorship. We’ve been there, though.

The ACC did suffer Braxton Key and Cole Anthony injuries it couldn’t control. Excuses like those probably prevent this from being a wakeup moment for the sport, already long-suffering from casual fan indifference through March. Maybe fans will watch March Madness whether it’s Brissett or me in a Syracuse uniform and the NCAA will live with that.

It’ll be harder for the ACC, who launched a network they probably wish debuted during the Zion Williamson year, to face this possible new reality. It’s unclear how the network is performing rating-wise, but ESPN has suffered after riding Zion to a 15% spike last year.

It wouldn’t be stunning to see the ACCN lagging relative to expectation. Especially considering issues with rollout (I still don’t have it on Xfinity) and soccer cutting into its basketball schedule reveal that got beaten by leaks anyway. Basketball Media Day was largely unwatchable.

Consider me an ACC elitist. This conference dominated and gained upward of nine NCAA Tournament bids in recent years. Realignment worked for basketball. The conference is now suffering from what notably hit the Pac-12 last year. Duke saves it from reaching that same degree of struggle. Still, it might only send three or four to the tourney. Barring a miracle, count Syracuse out.

Much like the NBA losing the Warriors dynasty, casual fans aren’t tuning in for parity. Which is fine. I’ll watch college basketball even after one-and-done goes away and more high school stars spurn college. That’s on the way. The leagues won’t enjoy losing them though, yet there doesn’t appear to be any structural adjustments incoming as the world turns past the NCAA.