If you find Syracuse’s zone, please return to Jim Boeheim 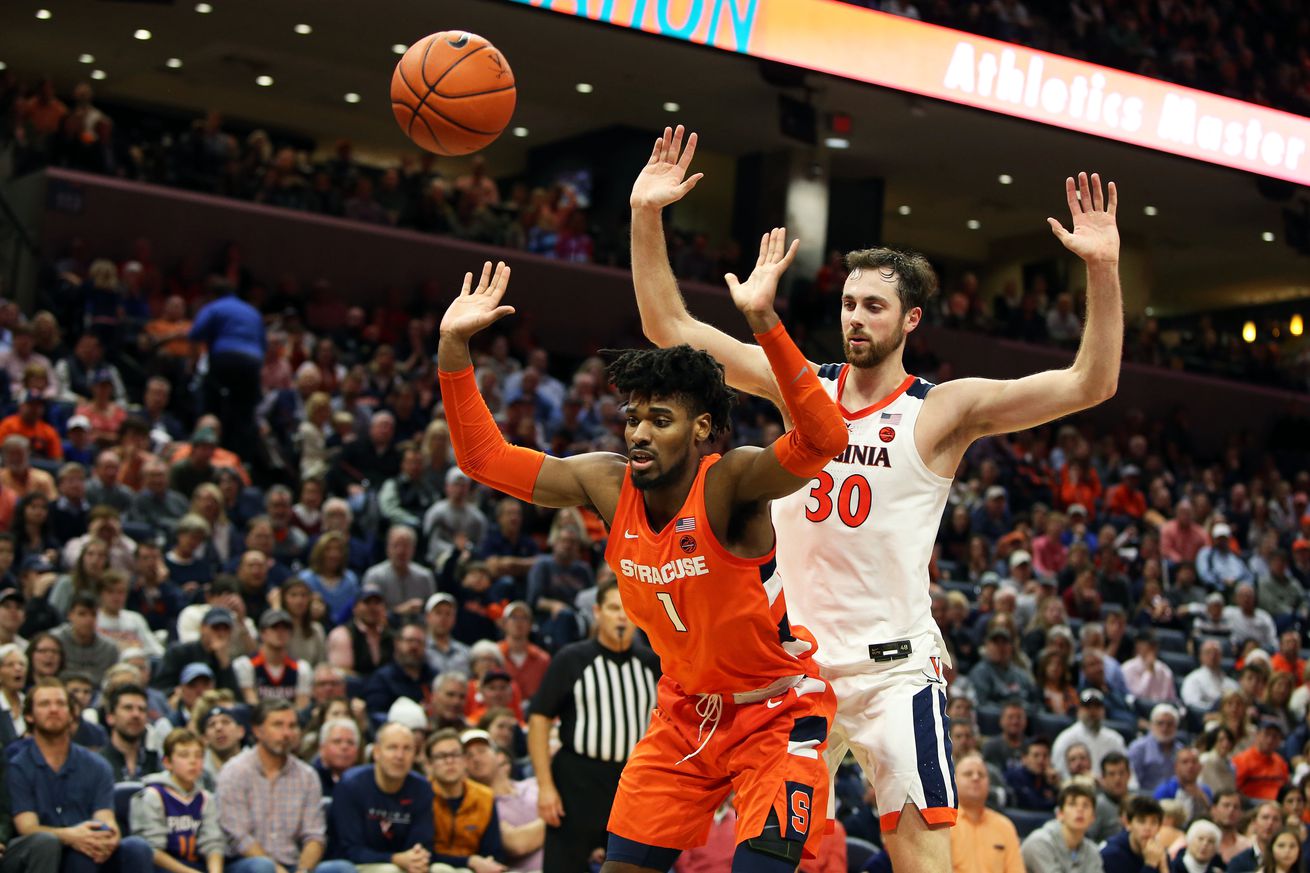 The Syracuse Orange returned to earth on Monday night after the Virginia Cavaliers asserted their dominance throughout the entire game. Suffocating defense and a steady, flowing offense allowed Virginia to open up an early lead that eventually led to an 81-58 Orange defeat.

The game plan’s of both teams were apparent from the opening tip. Virginia implemented its trademark slow pace that has defined the program over the last several seasons. In response, Syracuse tried to push its offensive pace early, with some initial success from mid-range. However, the Orange jumpers stopped falling quickly, resulting in an early Cavaliers advantage.

Clark ?? Huff for the slam

Syracuse’s defense didn’t look great to start the game as well as the ball got into the high post way too easily through a pass to Kihei Clark or dribble penetration from him. The resulting collapse resulted into easy lobs over-the-top to Virginia’s strong frontcourt. The Syracuse guards couldn’t stop the ball from getting inside the arc, which allowed the Cavaliers to do whatever they wanted on offense.

As the game progressed, Virginia’s defensive strategy perfectly negated Syracuse’s initial game plan. The Cavaliers started to tightly face-guard their man, leading to a tightly contested, low-percentage jump shot every time the Orange attempted one. Syracuse did find success with drives and shots at the rim, but more often than not the Orange settled for a jump shot.

Virginia’s initial success on offense early in the game paid off later in the half. Clark’s penetration at the high post meant that Syracuse collapsed to him, which opened up passing lanes for kick-out threes. Sam Hauser, Virginia’s leading scorer, took full advantage of the openings, scoring all of his 15 first-half points from three.

The second half didn’t solve many issues as Virginia continued to nail threes with regularity. Jay Bilas pointed out on the ESPN broadcast that the Orange looked like they weren’t following the ball well. Every Syracuse player seemed to be caught off-guard when the ball went their direction, whether from a pass or from dribble penetration. That allowed the Cavaliers to stay hot in the second half with easy and open looks.

As Virginia continued to take advantage of Syracuse’s zone, the Orange switched to the fabled full-court press that will surely bring back memories of 2016. The initial result was good as Syracuse forced multiple Cavaliers turnovers. However, the Orange couldn’t take advantage as they committed multiple sloppy and unforced errors.

Eventually, the Cavaliers figured out how to settle into their half-court offense against the press and found the same passes from the high post that carved up Syracuse the entire game. The Orange did find some scoring with some opportunities around the rim, but more often than not Syracuse took the same jumpers that created the initial deficit.

Some of the same problems that plagued Syracuse early in ACC play returned to haunt the Orange in Charlottesville. There are certain styles of offense that the Orange showed at times, but the defense collapsed far too often stop any offensive momentum that the Cavaliers consistently built. The Syracuse zone can’t be a liability like this all season or the Orange will continue to lose games, no matter how much the offense shifts to play to its strengths.

This article was originally published at http://nunesmagician.com (an SB Nation blog). If you are interested in sharing your website's content with SCACCHoops.com, Contact Us.
Categories: Basketball, Syracuse, Virginia