Eric Dungey gives us some hope after a slow start. 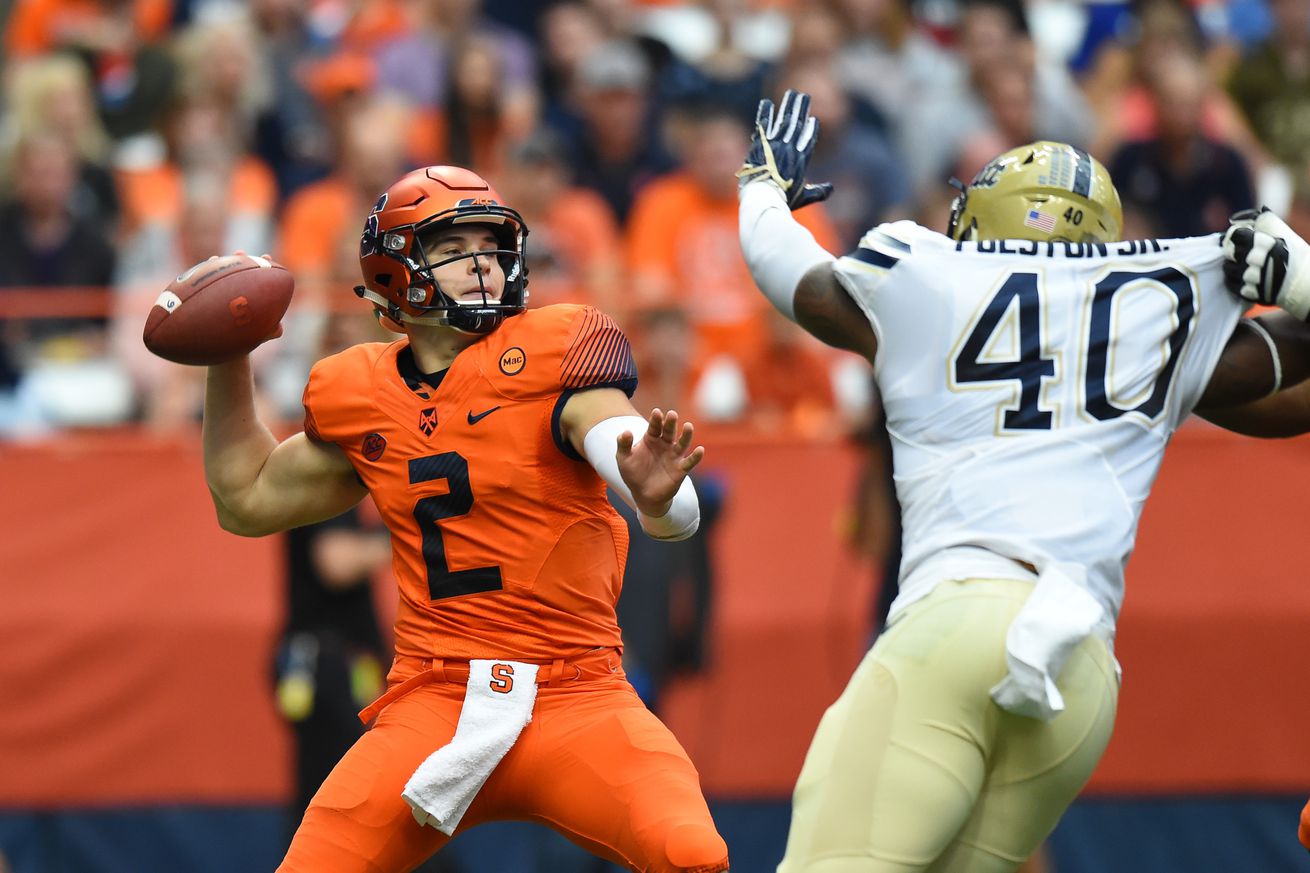 The Syracuse Orange and Pittsburgh Panthers played some weird football, especially in the first half. But SU got it together offensively and held on with a big defensive stop. ‘Cuse kept their bowl hopes alive with a 27-24 win.

So here’s some little things we learned from that

Eric Dungey is a huge factor against aggressive defenses

When teams come at the Orange, Dungey comes to play. Pitt chased him all around, but Dungey stepped it up, especially in the second half.

Dungey threw for 365 yards and a pair of scores. He ran for 48 yards and a touchdown and looked comfortable doing it. His rushing TD in the third quarter to make it 17-13 silenced some criticism and ended up being crucial for ‘Cuse. He kept it rolling later, dropping a dime to Steve Ishmael for his ninth passing touchdown of the season.

We saw him take some late hits like a champ, too. In the third, Cam Bright lit him up on the sidelines. However, Dungey popped right back up clapping his hands. Yes, we don’t want him to get hit too much, but this team does feed off of him acting as a fearless leader.

There are receivers beyond Ervin Phillips and Steve Ishmael

The offense spread the love today, as four receivers had 50+ yards.

Tight Ravian Pierce came up big with 99 yards on nine catches. He pretty much carried SU an entire drive in the third. Pierce was a mismatch with speed coming off the line, exactly as ‘Cuse drew it up. He was tough to take down and still deserves plenty of praise, despite an inability to haul in the fourth and one shovel pass from Dungey with less than a minute to go.

Devin C. Butler had seven grabs for 64 yards and a touchdown (the first of his career). Ishmael was still a big factor with 97 yards and a score. Overall, a job well done by spreading it around to more than just two guys.

We knew Syracuse wouldn’t have the best O-line out there. Today they showed us just how bad they can be. Pitt’s very average pass rush was in Dungey’s face nearly every play in the first half. In the second we saw him running for his life and taking (late) hits.

Dungey was sacked twice and SU racked up just 135 rushing yards. They got it together (kinda) in the second half.

If this offense is going to be successful, they need to at least hold their own against average defensive fronts. Opponents like Clemson, Florida State and Miami are far more aggressive up front than anything we saw from Pitt today.

Any other big takeaways from today’s win. Share below.

This article was originally published at http://nunesmagician.com (an SB Nation blog). If you are interested in sharing your website's content with SCACCHoops.com, Contact Us.
Categories: Clemson, Florida State, Miami, Pittsburgh, Syracuse